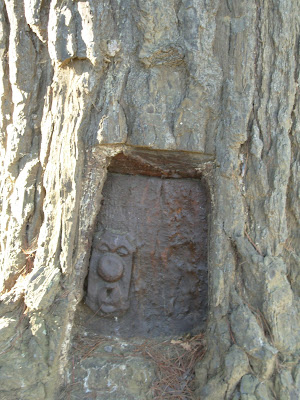 Like Alice in Wonderland I stumbled into a strange world at Kettering recently. This is the place where you take the Ferry to Bruny Island and there are some pleasant places round about like Peppermint Bay, which has a great restaurant and Woodbridge, with its narrow crooked road, large old oak trees and quaint shops and vineyards. The road I usually take was closed and I ended up at an almost deserted hotel. Inhabited by strange creatures and mythical beings, it looked like a film set from Lord of the Rings. King Neptune guards the entrance. A mermaid gazes out to sea and wherever you look you come upon intricate sculptures by Swiss Australian sculptor Roland Gabatel. 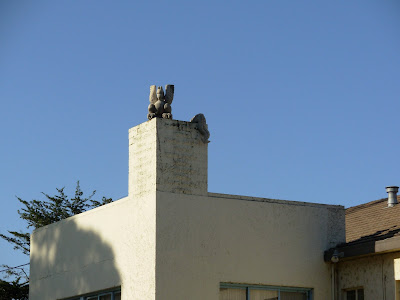 There's a Griffin grinning from the top of the chimney 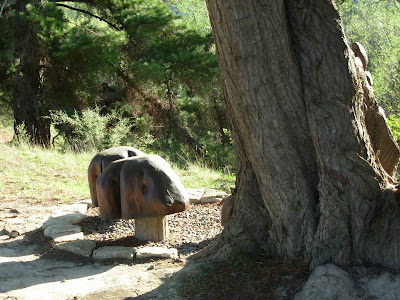 Giant Mushrooms lead the way to the door 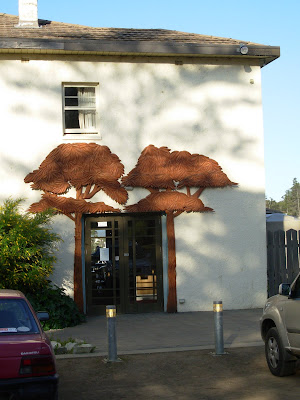 Entrance to the Oyster Cove Hotel. There are interesting sculptures inside too 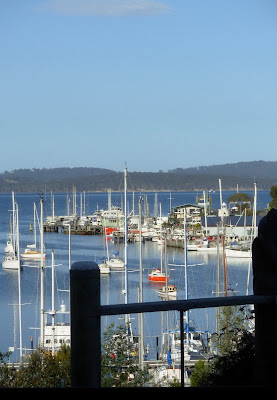 The mermaid's view from the verandah 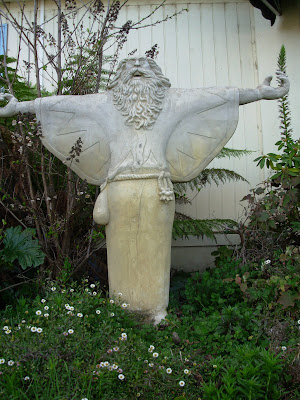 An exhuberant Merlin rises from a garden bed 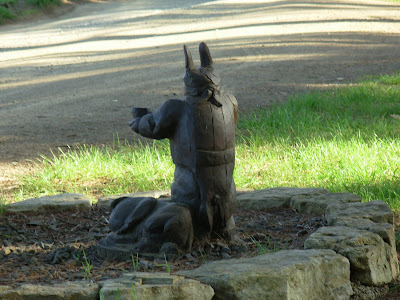 Strange creatures and mythical beings - even the green man is here 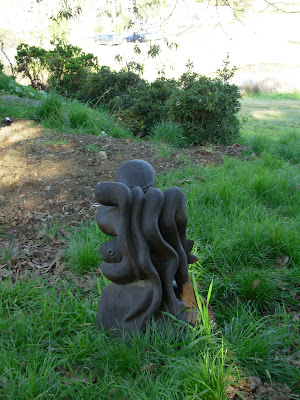 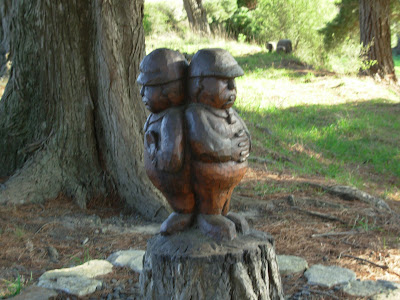 Tweedle Dee and Tweedle Dum in the driveway 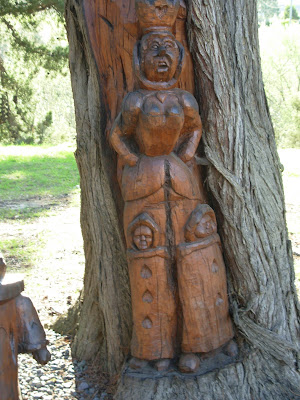 The Queen of Hearts emerges from a tree. The White Rabbit, the Cheshire Cat and Alice are nearby 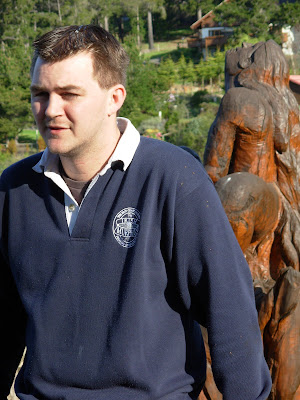 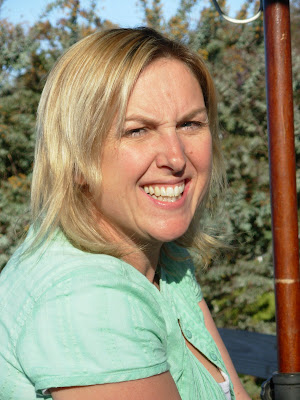 Nat and Tim who made me welcome on a lovely sunny afternoon -Hi Guys!

I don't know about you, but I am not one to haunt museums and galleries. I love my art served this way - a naturalistic setting where it takes you completely by surprise.
at September 20, 2007 No comments:

Year of the Blood Moon 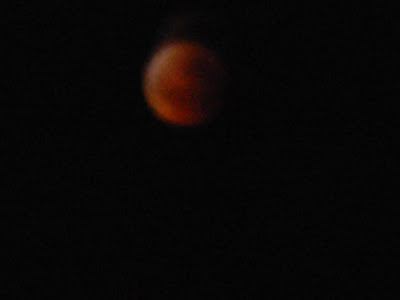 Dear Friends,
You must be wondering what is going on. Well it seems that my marriage of 24 years is about to end in divorce. This has made everything I was doing pretty meaningless - travel, writing, working overseas, doing up the house etc. and I have been miserable since June. It felt like someone had died. I think it was me.
Now, after the coldest winter ever it is time to move on.

For the last couple of weeks I have been in the nation's capital to see how the other half lives. On the surface Canberra is all public servants, anonymous high security apartments and tree -lined streets (the City of Masan in Korea is modelled on it), but every now and then you get a glimpse of what lies underneath. It's very international and restaurants of every persuasion outnumber every other kind of business at the rate of about twenty to one. I am not surprised that my son has been putting on weight. The rest seem to be delis and kitchen shops, although the clothes and bookshops are pretty good too. 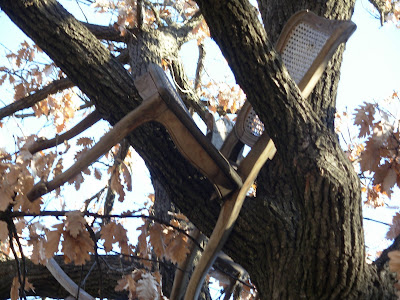 This is a rare Chair Tree seen only in Canberra
In the main shopping centre a man is playing a grand piano and I am treated to a free facial and manicure. After a pleasant afternoon barbie at Tom's for visiting Mums, there's a round of pubs and nightclubs including the aptly named and eclectic Phoenix. There is even a genuine Irish pub here (not your O'Malley's or Bridie O' Reilly's) called Filthy Mc Fadden's though I have yet to visit this one. Afterwards we dance until dawn.

Back out in the mall there are four drummers hard at work and even the police seem to have a spring in their step. A green rabbit bops by, then a bevvy of middle -aged school girls and a few goths. Pub crawlers from the uni and a troupe in kilts with blue woad on their eyebrows, presumably after Wallace or some other ancient Scottish hero, come next. Canberrans do know how to make their own fun.
My son has just come from a Come As You Aren't party where their favourite goth (Hi Adelle!) came as a cheerleader and the very proper German exchange student came as a goth. Said son, now a business analyst, came as an Arts student with a McDonald's application in his pocket. It is strange to see him heading off in the morning in a suit and tie and a business shirt freshly ironed by his own hand. His friends down here would never believe this.

There is also a top uni here with lots of international students at the leading edge of their discipline and lots of very cheap drinks. It's seems a shame to be sitting here drinking (mine only cost me a four leaf clover) when we could be out there changing the world. Still I get to speak French and German alternately and meet two astrophysicists named Wolfgang in one evening. There's also a lovely girl who drapes herself around me and tells me how much she likes older women. As I head home to recuperate, I am terrified of losing the dogtag for the electronic entry. It would probably take a swat team to get in without it.
Meanwhile, the party kicks on without me at the Rugby Club which is televising the France versus Argentina match, followed by a breakfast of bacon and eggs. Too bad France loses, as it's the last night for one of our French friends. They say goodbye as they carry son home at seven in the morning on their way to the airport. Sorry, no pics to protect the guilty. At sunrise, two magnificent hot air balloons glide by. They look so near you could almost touch them.

On Sunday we go to the local market where we stuff ourselves on generous free samples - relish, dukkah and wonderful loaves and dips. There's lots of other stuff to do here too. It is sort of a political fun park - Parliament House tours, old and new, the War Memorial, the National Gallery, lavish embassies, the observatories and the Floriade Festival, but we did most of those last time so I am happy just wandering about - there's lots of green space and the cherry blossoms are coming out. Some of my excursions are involuntary. Canberrans are a bit secretive about street signs and it's really easy to get lost. They also have a really curious cab service here which claims to operate on voice recognition. "Did you say Blogsville? " and drives people mad.

On the 28th, like hundreds of others, we walk alongside Lake Burley Griffin to watch the spectacular Lunar eclipse though the photo doesn't do it justice. There's almost always a big sky in Canberra - it was built inland in open paddocks and that is why there are so many observatories in this area. Although the days are mostly sunny now, it is still freezing at night and it seems that I am wearing my entire wardrobe. 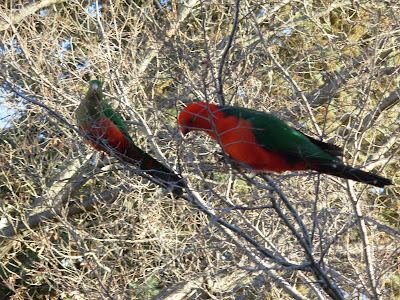 Cheeky King Parrots seen on the way to the shops (me not them).
For the totally desperate there is always the telly. Coming from Tassie, I am mildly shocked to see all the ads for escorts and images of women waggling their body parts at me during prime time. Canberra is known as the porn capital of Australia. It is vaguely confronting too, when the belly dancer in a Turkish Restaurant dances vigorously at our table. It's hard to know where to look. I hope I am not turning into a prude.
In some ways Canberra reminds me of Victorian England (not that I was present) - all prisitine and respectable on the surface, yet with a thriving sex trade and more prostitutes per head of population than at any other time in England's history. No politicians in sight though. This is a bit surprising given that we are about to have an election. They must be all out in the provinces kissing babies and making promises.