The Price of Parsnips 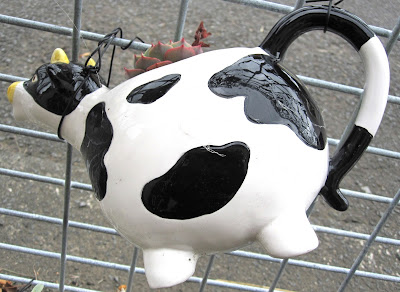 I blame those cooking competitions like Masterchef and the Superfood touts,  but suddenly humble vegetables like parsnips cost $ 9.99, the standard price for a  lowly cabbage is  $5 and even at the height of the season, zucchini sold for $ 7.99. I am not sure what do about the rising price of other staples of the impoverished such as lamb shanks and soup bones (osso bucco) - maybe plant a cow?, but I have begun to garden.

I am now the proud owner of a small plot in a community garden and it is starting to show promise. The broad beans are up, the kale has yielded a few leaves and the broccoli are heading nicely. I have so many seedlings of Broccoli and Silverbeet that I have been giving them away. Even the weeds are good eating and probably add a few much needed vitamins to the winter food supply.  And yes, I have planted parsnips.

I am not the only one with a sudden urge to plant something. While suburbanites can presumably dig up their lawns, many of the little old cottages in Hobart don't have room for gardens and nor do most flat dwellers, so their occupants have come up with creative alternatives. There are footpath gardeners, nature strip gardeners, pot and terrace gardeners, wall and hanging gardens. These are just a few that caught my eye as I have been walking around. Perhaps they will inspire someone else to take up a trowel and get planting.


Harvested my first broccoli today. OK now broccoli is selling for $4.95 a Kilo in the shops, but who cares. Vengeance is mine.


Rokeby is one of those little places on the way to South Arm. I had no idea that it had a history. Apart from the fact that the Police Academy is sited here, I had hardly heard of it at all. I always assumed that it was  one of those Johnny -come -lately suburbs, just another product of the post war baby boom with too many identical boxes and too little character, that you drove through as quickly as possible. That was, until I saw the sign indicating a Historic Walk  and decided to take a closer look.


Among the more positive outcomes of the bushfires was that the town got a reticulated water supply instead of having to rely on tanks and the vagaries of the weather - one of the reasons the fires proved so devastating. It also got  its own volunteer fire brigade. Rokeby House has also been restored, but I couldn't find it on this occasion.

Well that's another little mystery solved for me. There are many more since I am always intrigued by how towns evolve. What made people decide to settle here - water? A good harbour? A rich deposit of some resource - clay, stone or timber and coal or minerals in the case of the mining towns. In this case, it was good soils and grazing land. Availability of work remains a big factor.
And why do some towns thrive while others fade away - or in the case of Richmond, remain static for almost a century, making it the best preserved Georgian village in the country?
Connectivity matters - witness the previous post on the Bridge, so do modes of transport - first ships, then horses, and the appropriately spaced coaching inns. Next came the railways and then the cars. Some places were bypassed as the need to spell the horses and passengers diminished and far greater distances could be travelled in a single day. Others flourished because of the new advances in earthworks. Communities south of Hobart boomed once the Southern Outlet provided speedy access over the constricting mountains.

Although Tasmania has more visible history than most of Australia, I can't  help thinking that however substantial our towns and buildings look, the words fragility and transience spring to mind. The stroke of a pen in a distant surveyor's office deciding whether a road or a railway should go this way or that, fire and drought, a rich seam petering out, or a new development  such as  the end of the convict era, the mechanisation of farms, even the UK joining the Common Market and ending Tasmania's status as the Apple Isle,  may slowly or suddenly bring change. See it before it disappears. It's all only a snapshot of a moment in time.