It’s been spring -like today, but apart from that it feels like it’s been raining for a month. Nevertheless,  there was one day, a bit grey, when the rain held off for a while and my walking buddy  hauled me off to a rather lovely beach for a couple of hours.

I imagine that Marion Bay goes crazy over summer. It is a popular spot with surfers, but today its modest collection of beach houses seems subdued and almost abandoned.  There is merit in visiting a beach in winter, so long as you aren’t looking for a swim.

From the new lookout there are views over long stretches of empty beach, the ragged coast of the Forestier Peninsula, a bit of Maria Island and a wide expanse of open sea.  Apparently this bay has long been popular with sailors - a welcome pause after crossing the wild Southern Ocean.
Abel Tasman (1642) is reputed to have been the first European to call in, then Marion Du Fresne (hence the name) 130 years later, and finally fellow Frenchman, Nicholas Baudin on his way up the East Coast in 1902.  Until 1905 when the Dennison Canal was built, sailors still had to brave the exposed southern tip of the Tasman Peninsula to reach safer waters.  Though the new shortcut helped, ships still had to negotiate the narrow channel at its entrance whereby some still came to grief. According to the signage the wreck of the Zephyr is sometimes visible when storms shift the sand.

There’s no sign of the shipwreck as we walk the length of Long Spit, but we do see lots of seabirds and shorebirds– molly hawks and pied oyster catchers, gulls and the odd heron. The surrounding marshes are a haven for many more, as well as wallabies and echidnas.  The information board at the Lookout mentions that the area was also popular with Aboriginal people and shell middens prove that  sailors were not the only ones to find it a pleasant place to put in for a while. Other visitors include fur seals, dolphins and whales.

The sea air invigorates, the sun briefly warms, but a light shower starts before we finish our walk. The map at the start of the reserve said we would meet up with a farm road at this stage, but we don’t find it. Instead, we find ourselves scrambling back along the beach with rogue waves lapping at our boots. As the clouds descend and the wind springs up,  we see the darker side of what seemed such a  pleasant looking beach.
Who would be a sailor?

Around Town - 2 In praise of small shops


While doing a mad dash around town the other day looking for birthday cards, I discovered some delightful new shops. I do love small shops. They may be a bit more expensive but they are full of personality and you are sure to find something original and different. Here are a couple of my favourites of the moment.

merchant in Liverpool Street caught my eye because of the flowers outside and the lovely old typewriters in the window.  With  it’s bizarre collection of stuffed animals of the taxidermic  kind– and I am not quite sure how I feel about those - one hopes no animals were harmed etc., it’s a bit like Mr. Magorium’s Wonder Emporium and you just know there will be surprises inside.Right at the door there is a collection of succulents in unusual containers. On the opposite wall, old fashioned enamelware jostles with Tasmanian woodwork, handmade gifts and cosmetics . At the far end, handmade clothing and leather goods compete for attention among vintage treasures such as old Gladstone bags, while fudge and handmade chocolates take up the counter.  Sounds crazy I know, but somehow this all works.

Succulents also form part of the display at Augustus in Collins Street but here ceramic ware appears to be the main feature. I finally bought my card here, however, they also sell handmade chocolates and novel gifts, particularly for babies and young children. They also have a little café on the side – not so unusual these days, but it has the biggest slices of cake I have ever seen.

Tiny Footprints in Murray Street also specialises in things for babies and toddlers, but with an eco-twist. They have things like wooden toys, reusable nappies and environmentally friendly detergents to wash them with. I was a bit shocked at the price, but disposables aren’t exactly cheap either, and these are much better for the environment*. Interestingly, they also had two types of reusable straws which were not too expensive  - one sort made of bamboo and the other of stainless steel.

If you watched the latest episode of “War on Waste" - you will know why they are becoming a big no, no, along with disposable drink cups. If not,  find out why Straws Suck on 10 year -old Molly’s page  “Straw No More."  The turtles and many other creatures will surely thank you for it.


In keeping with its philosophy, Tiny Footprints is also a collection point for the Nappy Collective  which redistributes your unused disposable nappies to families in need. With October -one of the prime collection months,  just around the corner, now is the perfect time to mention it.

* Just read in "The Conversation" that disposable nappies are the "third-largest single consumer item in landfills, and their production requires some 7 billion gallons of oil each year.)"


Apparently they were raising money for the R.S.P.C.A. our animal welfare organisation. Today is their National Dog Day, in case you didin't know either. If you would like to help or maybe even adopt a canine companion, check out their Facebook Page.


PS I don't think these rabbits are available for adoption, but there's a very cute one in Devonport that is.
at August 26, 2018 No comments:

Bury Me Standing - A short post about a long coffee

Thought I would be writing about our beautiful spring blossoms today, but on Tuesday night we had a terrible storm and now there are hardly any left. Looks like I have to tell you about a delightful little coffee shop I discovered instead. 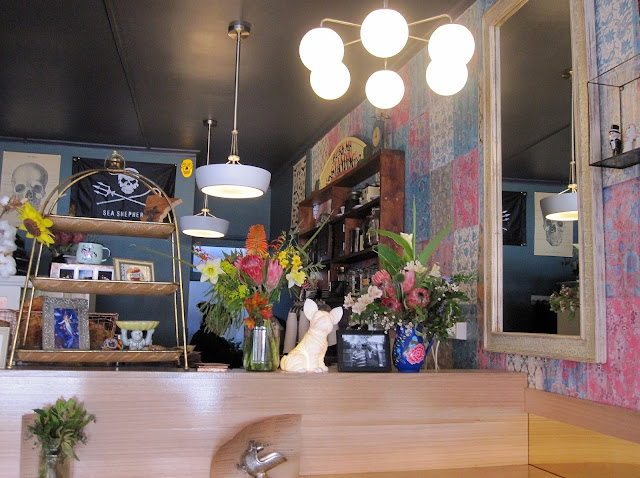 It reminds me of some of the crazy ones I visited in Russia – eclectic décor, eclectic people and a really nice vibe that makes you want to stay there and write novels or at least drink coffee all day (and no, I didn’t get a freebie from them).
What got me in was that they had fresh flowers all over the place- more than necessary really, and then you start noticing all the other stuff –definitely some conversation starters there! 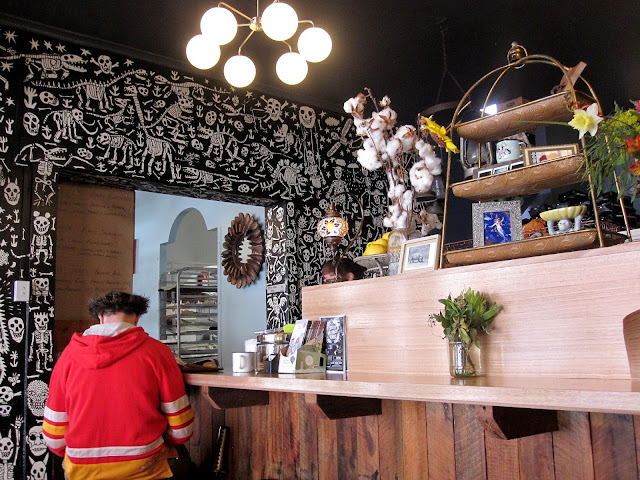 Oh. And did I mention the coffee wasn't half bad and they have enormous yummy bagels. I’m sure they have other interesting food, but after the apple fruit bagel generously loaded with cream cheese, I couldn’t bring myself to look. I do know that they have an excellent variety of bagels as I had a really hard time choosing between them.


I see this as a sign that Hobart really is coming on. Coffee culture is definitely happening  -be it in a hole -in  -the  -wall,  a grand hotel or sprawled over the footpath or both. The food gets more interesting every day and there are some lovely little shops. The latest addition is a Speaker’s Corner. I look forward to seeing it in action. 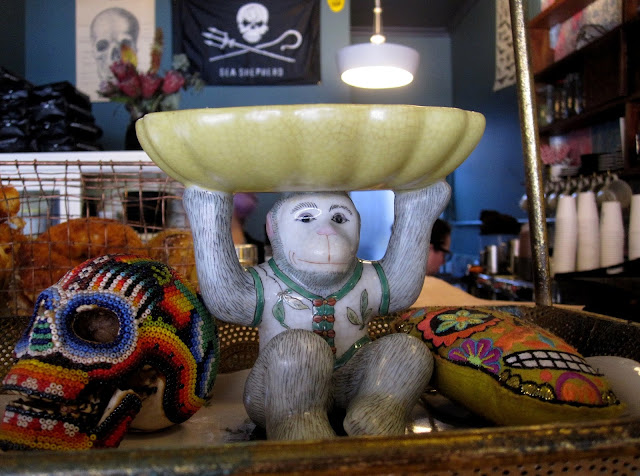 Mount Misery, Tasmania – much better than it sounds


We – walking buddy and I, walked to Mt. Misery last week.  Although it was a bit of a dreary day, this three hour walk was much more interesting and attractive than it sounds.

Access is via Huon Bush Retreats an eco - resort at Ranelagh which is a private Habitat Reserve, an interesting concept in itself. Sixty –eight landowners in the area have banded together to create a haven for flora and fauna, protected by covenants over the land, the first to have been issued in Tasmania. You don't have to stay at the resort to do the walk, nor is there any charge, but donations are welcome. Learn more about private reserves at the end of this post*.

After negotiating the gravel road of which the last 500 metres is especially challenging to 2WD cars - the secret is not to stop or slow down, you arrive at what appears to be a bushland campground. There was no one else here when we came though we had contacted the managers beforehand. Cabins and teepees are tucked away unobtrusively among the trees and there is even an outdoor bath. The resort uses solar power, natural water and composting toilets and doesn't have television or wifi, though there are board games if you like.

Wallabies hop about freely and the air is filled with birdsong. The tracks have all been built by the managers and there are a number of interpretive panels. Unusually, these also include information about the Aboriginal heritage of the area and the geology, things you don't often see.

Even though I am a card carrying member of the Slothbagger's club  the walk to the top of the mountain wasn’t too difficult. Along the way,  there is a great variety of vegetation in a smallish area -enormous eucalypts, a bit of rainforest, heathlands, fungi and ferns, including epiphytes – the type of ferns that make their home on other plants, rather than putting roots down themselves.

If you didn't want to do the whole walk you could just walk up to the lookout where you can look down the valley and see the bend in the Huon River which was the staging point for all that came and went until the road was built, or you could walk a little further to the plateau and get a bird's eye view of the surrounding mountains. After that, it’s only a gentle climb to the top.

On the way back we do a detour to a pretty little waterfall that drops way, way down into a narrow gorge. We were lucky to see it in flow because apparently it hasn’t run for a couple of years due to lower rainfall. This year despite the  crippling drought on on the mainland - the second worst since 1902, Tasmania has had its share.  All in all a thoroughly pleasant day.

* About Private Habitat Reserves
Until 2009 the State Government managed conservation efforts on private land, including that on Mt. Misery, but since then they have been managed by The Tasmanian Land Conservancy, a non -profit foundation, which buys land with high conservation values or endangered species on it, puts a covenant over it to protect them in perpetuity, and then resells it to a suitable buyer who will protect it. It is an interesting idea which is especially useful in places where the Government is unable or unwilling to fund reserves itself.