It must be Australia Day 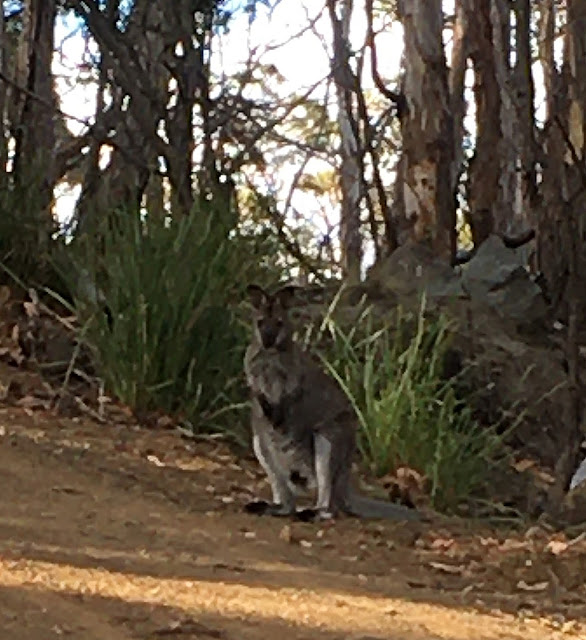 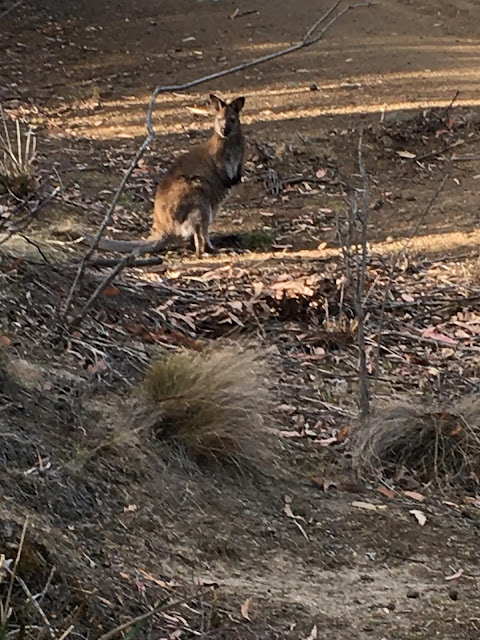 I visited a friend who lives on the edge of town today. I couldn't believe my eyes when I got near his house. There were dozens and dozens of kangaroos. There are usually one or two up this way,  especially around dusk, but I had never seen so many kangaroos in this area before. Did they know it was Australia Day?

As I drove a bit further on, the answer soon presented itself. Around the corner, a man was filling buckets of water and the kangaroos were simply flocking to them. Things are looking very dry, so it could be a nice thing to do if you are on the urban fringe. It proves that in some places at least our wild life is still thriving.

Speaking of wild life - this is the time of year that young devils first venture out of their dens or get kicked out of home, so keep a look out for them and drive carefully on our roads.

And now for the Itinerary you’ve been waiting for......

The Apocalypse Tour for Cashed –Up

Experience the Tour of a Lifetime - everyone’s Lifetime.

Image by Herbert via Pixabay

I have often been asked to lead tours or suggest an itinerary for visitors to Australia, so here is a very special one for those who still think that (a) There is no climate change (b) That the earth is flat. (c) That the latest bushfires, heatwaves and erratic weather are a natural phenomenon or (d) They were caused by arsonists or the Greenies for not allowing us to burn off and log everything. There are after all no bushfires or dead animals when everything has been paved over. No food either, but that’s another story. For the rest of you, just come anyway. Australia is vast and there are still very beautiful places to visit. However, the places that have been burnt out need you the most, so come on down.


Tour guests may not fly here in their private jets or with commercial airlines, like they do at climate summits. If they don’t have their own luxury yacht, perhaps they could get together with a few friends and charter one or build a Kontiki -style raft - a great team -building exercise! That way, assuming you are leaving from your tax shelters in the Caymans, you can take in additional wonders of the modern world such the Great Pacific Garbage Patch and the sinking villages of Kiribati  while you still can and as you pass by New Zealand, do stop by and get a glimpse of the vanishing glaciers on its West Coast.


Where to stay – you will enjoy a variety of accommodation, from nights under the stars to emergency shelters set up for bushfire evacuees, rustic glamping amid the remains of luxury lodges in what used to be bushland, and any shelters you have been able to cobble together yourself from twisted corrugated iron, half -burnt fence posts and scrap fencing wire. There will be a prize for the most innovative design and winners will be featured on a popular Home and Garden show.

Most meals will be supplied  -Real bush tucker made from the abundantly available barbecued wildlife, served with delicately smoke tainted wine or sautéed fruit bat with a side of freshly deconstructed roadkill from our highways, where animals are either seeking food after bushfires or fleeing from destruction of their remaining habitat by loggers

Image by suburbanbloke -[CC-By-SA]
6
CORRECTION : About the Red Cross. I stand corrected re the amount retained for administration.  However, according to Charity Watch Site The Good Cause, they are still ahead in terms of transparency and effectiveness. Let’s hope they do the right thing with the other 60 million which have not yet been given out. The world will be watching.
at January 25, 2020 No comments:

Are the weather Gods trying to send a message directly to Canberra? Last week the nation’s capital sweltered in 40+ temperatures and looked like it was about to be engulfed by flames.  Yesterday it was slammed by hail stones the size of golf balls, which caused considerable damage and loss of power to 1000 homes. Meanwhile the Gold Coast had flash flooding due to super storms, but according to the Rural Fire Service, the rain has been so patchy that 46 fires in NSW are still burning and 16 have still not been contained. Drought continues in many parts of the country with huge dust storms enveloping places such as Dubbo and Parkes. Severe weather warnings continue for much of Australia, with the main bushfire season only just beginning. Some people have suggested that we should ease up on the prayers a bit and actually do something about preventing further climate change, rather than generating more hot air. There is no economy on a dead planet as farmers, tourism operators and small shopkeepers are finding out. They deserve to keep their jobs and businesses just as much as coal miners, in case they are still being used as an excuse.

Of course we still want you to come and visit our other attractions, but with Disaster Tourism trending perhaps we could capitalise on that. My initial target market would be well -heeled Climate Change Deniers so that they can see the results at first hand. However, we don’t want them adding to emissions, so my first challenge to them is to get here without contributing further to greenhouse gases. That means no coming in their own private jets*  -  there were 1500 of them at last year's Climate Summit, or even by commercial airlines. They must come by balloon, dirigible or by sea.  If they don’t happen to have their own luxury yacht, they could perhaps get together with a few friends and charter one. That way, assuming they are leaving from their tax havens in the Caymans, they could also take in additional wonders of the modern world such the Great Pacific Garbage Patch, the sinking villages of Kiribati and a glimpse of vanishing glaciers on New Zealand’s West Coast.  Within Australia we have very few trains and the ones we do have don’t connect with each other very well since they, like fire management are a state matter. Wonder why we needed Federation? Perhaps we could deploy some of those camels, so they won’t all have to be put down.

What will it Cost?  Not sure of the final costs yet. According to Paul Read and Richard Dennis writing in The Conversation, our disaster bill to date  - tangible costs only  i.e. lives lost, homes lost, livelihoods lost, stock losses, tourism etc are currently estimated to be $100 billion, and that’s not counting the human cost or the toll on wildlife and habitat. This amount will be split among tour guests with an additional surcharge for wasting time, opposing the carbon tax and evading er minimising their taxes, so that we can establish some new industries, so that even our coalminers can look forward to a future, rather than being cast aside when the coal runs out.  Nostalgically looking back to the past is not an option, nor is adaptation.  We need forward planning now, so please think hard at Davos folks.

*Don't at least some of you own laptops so you can teleconference each other?