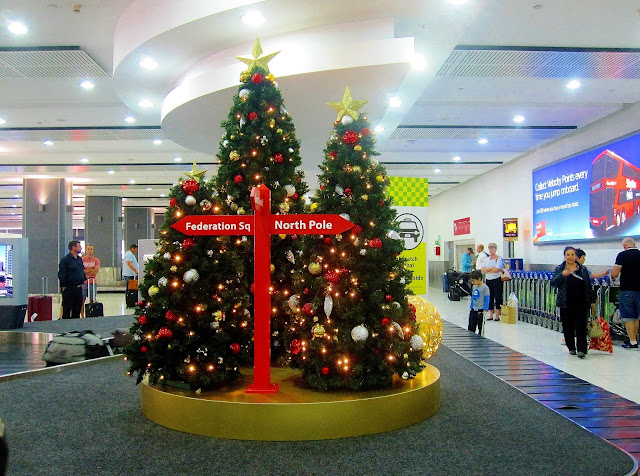 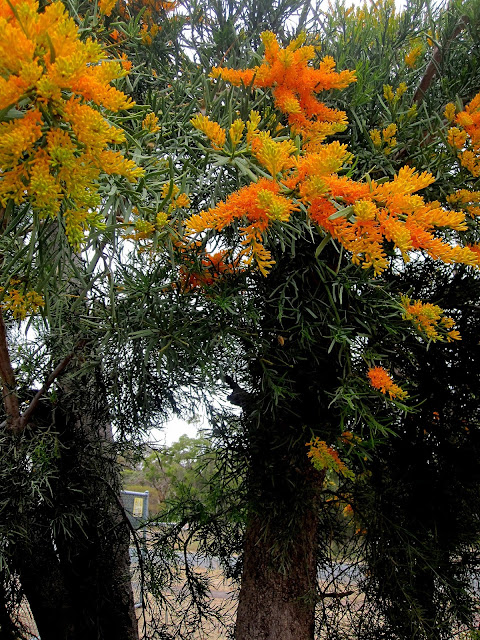 In Western Australia the season of flowering trees continues -not just the Jacarandas, stunning as they are, but also those above, several types of ti -tree and the first of the flowering gums, a spectacular pink one. (Sorry no photo, I was in someone else's car on the way to dinner).The bright red calistemons, usually one of my favourites because they come out at Christmas time and provide a seasonally appropriate splash of colour, came out much earlier this year and during a particularly hot spell, making them go into almost immediate decline before the flower heads had fully developed.

Though I wasn't sorry to be leaving the heat behind, I was a bit sad to be leaving Western Australia, knowing that I was unlikely to be back, now that my daughter and her little family were relocating to Queensland. This had been their home for the past six years or so, but such is the way in Australia. You have to be prepared to go where the work takes you. It makes the annual get together that is Christmas all the more important. Goodbye to the West and all the good friends there.

Rain! ...and the revolt of the Shopping Trolleys


Whooeee!  It just rained, and a real gutter -spiller it was, complete with thunder and lightning. I don't think we've had a drop of rain since I came back from Broome on the 4th of October.  All around you can hear the bush and the trees sighing with relief and I feel much the same. Before that it’s been a bit like "Troppo Season" in Darwin just before the rains hit, which is usually accompanied by an excess of violence, pub brawls  and road rage. Then, when the rain does finally break, you feel like going out and dancing in it. That how I felt last night.

It’s been over 37oC for the past few days and everything has been tinder dry. Tempers have been short too. Indeed, the Allied Shop Assistants Union has been thinking of going on strike due to abusive shoppers. So much for Christmas Cheer.  To be fair, while I was braving the crowds yesterday, one nice man with a massive trolley let me go ahead of him with my single bottle of milk and a box of chocolates. It's hard to get excited about snowflakes and turkey dinners when you break out in a sweat just getting out your credit card.
Outside in the parking lot, there were standoffs over the last available parking space that had a tiny bit of shade and I could see people sitting in their cars with motors running and the aircon on, eating icecream.  Even the trolleys seemed to prefer the shade.

Blame my suspicious nature, but I’ll swear they were up to something the way they clustered together in conspiratorial knots. Were they plotting revenge on thoughtless shoppers who abandon them on vacant lots, use them as baby carriages, or simply leave them in the street to be monstered by traffic?  (It doesn’t happen to Aldi’s because you have to pay for those).  Don’t say you haven’t been warned.

As you may have guessed, I don’t have much to report at the moment- no stunning photos or exciting adventures, but not for lack of activity – end of year concerts, family moving house, Christmas parties, guests  coming, people leaving, including me. I’ll be heading back to Tasmania later in the week and then it will be full on Christmas mode for a couple of weeks.