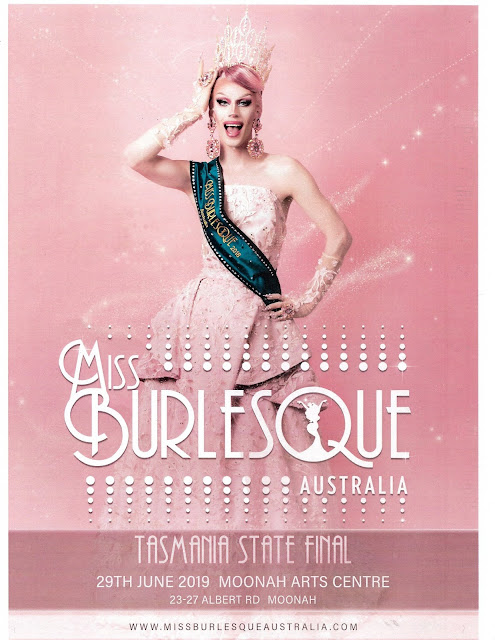 Just a quickie tonight for my friends at Miss Kitty’s.   Do you love costumes, glamour and a bit of frivolity or are you sad that Dark Mofo is over and are looking for something fun to do? Then go along to The Moonah Arts Centre tomorrow night.  In fact, better still, wear your own sequins, victory rolls and red lipstick and join in the fun. There’s champagne on tap too.

I bet you didn’t know burlesque dancing was a competitive event. I didn’t either until I went along to Burlesque Idol a few months ago. I was worried that it might be a bit sleazy but it was clever, witty and hugely creative. Far from being exploitative, many participants say that it’s also truly empowering. A bit later I’ll write something about the history of burlesque and its recent revival, but that’s all I have time for now.

Creatures of the Night 3 -Dark Path


“And when you’re out in the woods, be nice and good and don’t stray off the path.”
Brothers Grimm “Little Red Cap.”

I was wrong about Dark Mofo. It was busier than ever with over 15,000 people attending and many events and performances already booked out.  I didn’t go to the parade or the burning this year, but you can catch the latter on the ABC’s page.

I did however, tackle Dark Path which was essentially a four Km  Art Walk with a nod to dark fairy tales, witches and disturbing thoughts.  It’s a pity that it was -3° C or I would have stayed around for more of the events, but here are a few glimpses. (Pity help the dawn nude swimmers in the morning!) 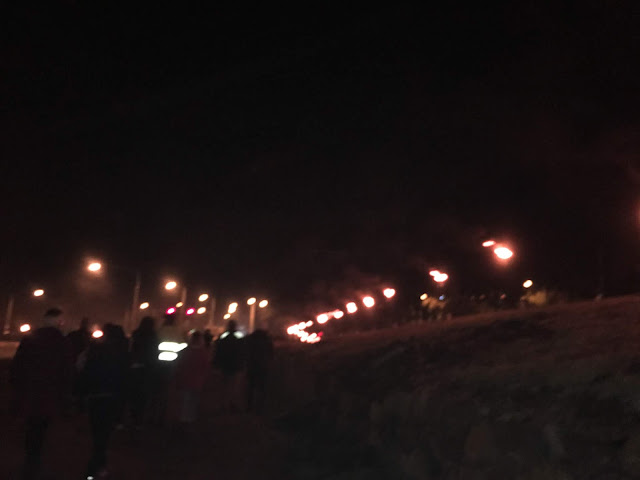 I followed the torchlight procession struggling uphill over the Domain, a largely grassed area flanked by trees commemorating the war dead. Government House is near the top along with the old Powder Magazine. In this area there was the haunting exhibition “Missing or Dead” by Aboriginal Artist Julie Gough, recounting the stories of 180 Aboriginal children stolen or lost during the early days of Van Diemen’s Land.  These stories are sad. They are indeed the war dead from a largely unacknowledged war.

In the Powder Magazine itself was Chris Henschke’s “Demon Core”   which builds on his love /hate fascination with radioactivity, already encountered in “A forest.” This installation however, recalls “a disastrous critical mass experiment “which occurred in America in the 1940s. I had to wait in line for 40 minutes for this. 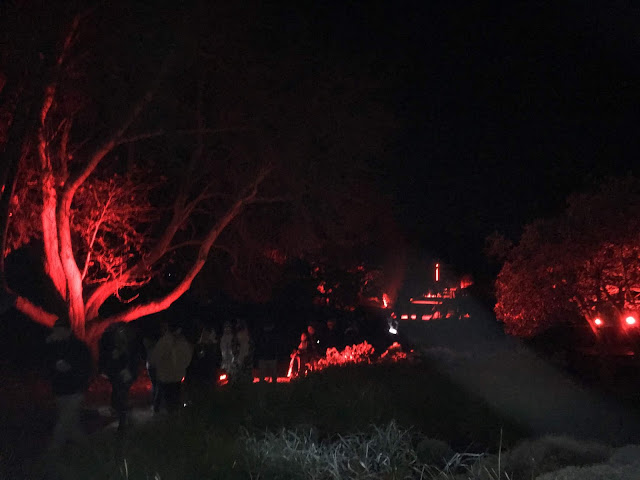 Next stop was the Botanic Gardens themselves. How eerie the trees looked, bathed in red light, even more so when they began to speak and scream. A crazy Tesla coil added its crackling voice from to time and split the night sky with its artificial lightning.

More queues awaited at Tony Ousler’s De –Extinction Pavillion where extinct species were projected onto screens. The venue was fitting. It was where the old Beaumaris Zoo was, and where the last Tasmanian Tiger was said to have died in 1936. Ousler's work raised interesting questions – disquieting questions, such as is the next extinction likely to be truth itself, with critical thought among the first casualties?

“Oursler’s sprawling new work confronts the erosion of critical thought, and the rise of misinformation, conspiracy theories, superstition, and magical thinking, inviting us to ask: is truth on the verge of extinction?

Alas, by now the lure of my nice warm bed was much too strong, so after lingering for a while at this fire pit or that, I gradually made my way home without stopping at the many bars and refreshment stands. You could say I was much too good, but there’s always next year. Right!

Creatures of the Night 2 – Into the Forest

The crowds were there. The red crosses were there. Businesses were open. The aroma of sizzling steak filled the air, yet it seemed to me that Dark Mofo was neither as big nor as shocking as in previous years. Not that there wasn’t some gratuitous violence or exhibits which made you shudder, but Dark Park remained  dark and the kind of events which usually took place there, were either confined to strictly limited crowds inside the former Forestry building or scattered about across other venues including the Domain and the Botanic Gardens, but more about that later.   For now, a little about “A forest.”


We approached “A forest” with some trepidation. We were issued with earplugs on the way in and were warned about the possibility of experiencing depictions of violence before entering the Virtual Reality segment. With sudden thunderous noise, inexplicable exhibits and frightening images, it was rather like an adult horror show. It would have greatly helped if there had been some signage as to meaning or point. What, I wondered was the artistic merit or social purpose of watching random empty petrol drums implode? Or why was a bowl of fruit attached to a Geiger counter? Was it trying to say something about irradiated fruit?


Reading up on it later, I at least discovered that there was nothing sinister about the fruit. The Geiger counter registers the natural radiation in fruit and turns it into sound. Who says cabbages can’t scream? The Virtual Reality segment by Jordan Wolfson was shocking. People came away dazed as if they had been assaulted, yet without any kind of explanation you were simply left to wonder.  Steven Rhall’s “Air Dancer as a Black Body” which popped up at random, was also probably scary enough without the subsequent explanation that it is the way white people interpret black bodies.


There was more. We didn't even get to see the second virtual reality segment because the queues were too long. The one I understood least however, and which may have been a blessing because it embodied so much suffering, was the poetry written and spoken by 100 imprisoned  poets “For, in your tongue I cannot fit” by Shilpa Gupta. Unfortunately, for me it just looked like a thicket of microphones emitting a doleful chorus and I  came away confused and vaguely dissatisfied, but still, that is the aim of Dark Mofo, to challenge and confront.  This year it seems to be less about public spectacle, but more about private anguish. 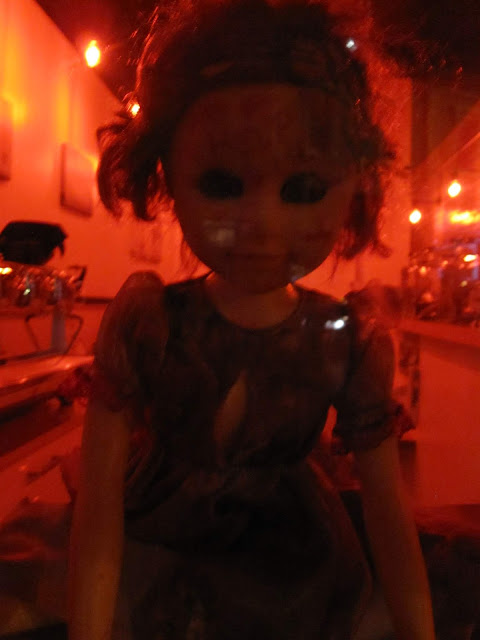 As we hurtle towards the solstice it’s time for Hobbits and Hobartians to venture out of their holes, cold. dark and scary though it may be. Dark Mofo is on.

Haven’t seen much of it so far, though thanks to my daughter we did go out to Doctor Sketchy’s Anti -Art School on Wednesday night and last night our lovely neighbours lured us out into "A Forest” another Dark Mofo event.

I’ll begin with Dr. Sketchy’s. There are now hundreds of these around the world from Ireland to Antarctica. They were begun by illustrator and former artist’s model Molly Crabapple and illustrator A.V. in the Lucky Cat café in Brooklyn in 2005. Tired of the usual still life exercises involving boring bowls of fruit and static models, they injected some life into the proceedings by adding flamboyant characters such as burlesque dancers and freak show performers, not to mention ample glasses of wine and a few art based games.

At our session we had gorgeous 'bendy' man Samora Squid who stands about 6’ 4” and can contort himself in the most amazing ways including slipping his entire body through a tennis racquet frame.  Unfortunately, I think I was too fascinated with what he was doing to put much on paper, especially as we only had a few moments to sketch each pose with a feisty corset -clad Dimity Magnus cracking the whip and all the while having to maintain animated conversations, eating and drinking etc. Despite this, some people managed to produce some excellent work and were duly rewarded, though even lesser talent got a Fantale or two.

Also surprising was how lively the West End - at western end of Murray Street, was at that time of night. During the day it pretends to be a quiet business district with a late night chemist as its highlight. Now it was all lit up. Maybe it says something about how often I'm allowed out after dark, but  The Westend Pump House - the converted warehouse bar and eatery where Dr. Sketchy's was held, has apparently been open for at least three years. Across the road wine merchant Hop,Vine and Still which was hosting a lively wine tasting has been open for eighteen months and Urban Greek, right next door (it must be OK because it was packed out), has also been open for at least three years.