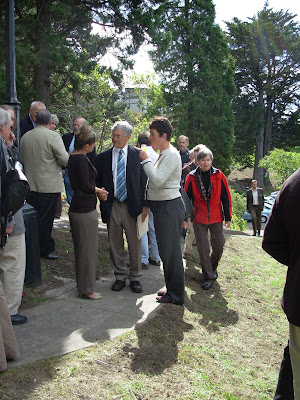 In my case a bit of Greenhouse Guilt has paid off. After my trips to Hokkaido and Mongolia last year I thought I should contribute a little to the "Save Recherche Bay" fund being promulgated by the Tasmanian Land Conservancy (TLC for short), which buys up land destined for logging to preserve it for future generations.

Recherche Bay has historic connections to Rear Admiral d' Entrecasteau's search for missing fellow Frenchman, La Perouse in 1792 and was probably the first bit of Tasmania ever stepped on by Europeans. The bay is named after his ship and many of the islands and channels and even the Huon River in this area, were named and charted by him.

I know there are many flaws with Carbon Offset Schemes - George Monbiot likens them to pissing over the side when when the ship is sinking, when we should be down in the engine room bailing (http:www.planestupid.com), but at least this is an established forest which is already sequestering carbon and one which we can see and visit.

The good news is that this forest is now secure thanks to a huge contribution by Australian entrepeneur, adventurer and now philanthropist, Dick Smith. He and wife Pip were guests of honour at the recent celebration to mark this event, to which we were also invited. It was good to see politicians of all persuasions there too, including Senator Bob Brown, Peg Putt from the Greens and State Labour Environment Minister, David Llewellyn. The state government contributed by waiving extensive stamp duties and formulating management plans.

If you want to know more or support the work of the Tasmanian Land Conservancy, look up their website at

On the subject of air travel, there's a nice quote by Richard Branson on How to become a Millionaire. "Start with a billion and buy an airline."