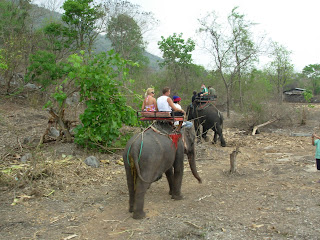 Thursday the 13th. March is National Elephant Day in Thailand so I have had the guilty pleasure of riding one. Elephants are revered in Thailand often featuring outside shopfronts and cafes and in very large sculptures - the one at the elephant museum is said to be 14 storeys high.

Although I have mixed feelings about the exploitation of animals for human entertainment, there are various reasons for making exceptions here.

The first is that this is one of several sanctuaries for elephants no longer needed since logging became illegal in 1989. These activities help to provide food for the elephants and an income for rural people who would otherwise be unemployed. You can see that the surrounding countryside is rather barren looking.

Were it not for tourism, perhaps no one would bother about the remaining elephants. As it is there are only 4,000 left where once there were over 100,000. I suppose the obvious thing to do would be to make a donation, create alternative employment for their keepers and allow the elephants to graze in peace but I couldn't resist the chance to try this out for myself. The elephants did not seem to mind though it was a bit of a bumpy ride. 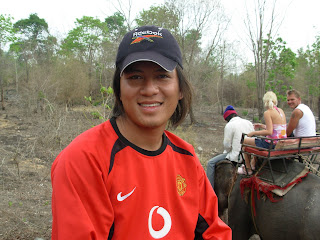 The route to the elephant sanctuary passes through Kanchanaburi where the Bridge on the River Kwai is supposed to be located. The Bridge is is not the one constructed during World War II because that was destroyed by allied air raids but the arches are original and stand as a memorial to all those who died building the infamous Burma Railway. Many Australians were among the prisoners of war forced to work on it by the Japanese and around 16,000 of them are buried in the lovingly maintained cemetery nearby. 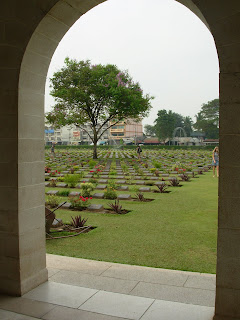 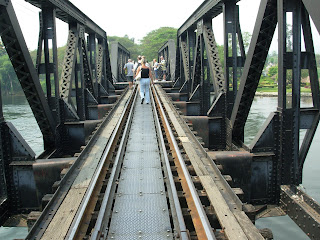 That famous Bridge on the River Kwai. Only the arches are original. The rest of the bridge was destroyed by the Allies at the end of Word War II

After a bumpy one hour ride on the railway you arrive at the Tiger Temple where another encounter with nature awaits. Here there are definite plans in the pipeline to create an island sanctuary for the tigers - many of them orphaned by poachers -which more nearly resembles their natural habitat and will allow young cubs to be rehabilitated into the wild. Meanwhile these photo opportunities serve the same function as those at the elephant park. To raise money for the care of the animals and to build better facilities. There are plenty of other creatures roaming freely here - wild horses, goats, humped backed cattle, razor back pigs, assorted roosters and peacocks and tiny curious deer. 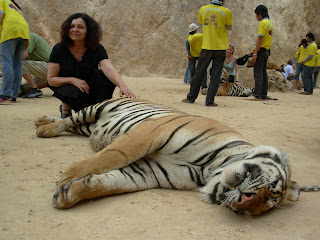 At the Tiger Temple - This tiger is not drugged or dead and I'm hoping he has been fed. They have had their exercise and are having their afternoon sleep. The money tourists pay to be photographed pays for their upkeep and is being used to create a new more naturalistic environment for the tigers

Then it's back to noisy, bustling boisterous Bangkok for the last bus to the airport. At least I've learnt a few things since I came two days ago. This time the thirty Km trip is only costing a quarter of what I paid and about ten times less than I was quoted when I first arrived. I also accidently hired out a whole longtailed boat all to myself, due to a slight misunderstanding with my Tuk Tuk driver, but it was a great way to to see a bit of the town with its superb temples (wats) alongside tiny stilt houses which appear to be only just floating on the river. Next time I will take a guided tour, although all in all I didn't do too badly. Best value was the full Thai massage (70 minutes) for around $AUD 10 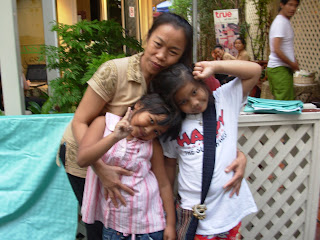 Masseuse Won and her children in Bangkok
Email Post