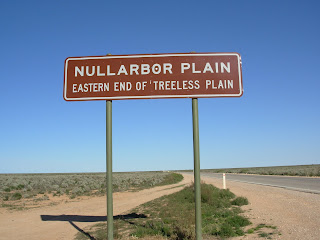 Translation: A paddock is the Australian word for field. When truck drivers say they are going for a run across the paddock, they mean they are driving across the Nullabor Plain, that vast area near the bottom of Australia called the Great Australian Bight, the bit which looks like someone has taken a bite out of it. Nullarbor means ‘treeless.’ It is.

The last time I did this trip, the road wasn't sealed and it was a long, death defying ordeal of dodging enormous pot holes, wild life and gigantic road trains which loomed out of clouds of red dust.You also had to carry in everything yourself – food, fuel, water and spare parts, as there wasn’t much in between – a lonely tank or a bore, if you were lucky.

This time it was a long,easy, sometimes boring drive with very few distractions. Only the wind was a bit of a problem, tossing the van around like a shoebox and making it use much more fuel that it should have.Just before Eucla on the longest stretch, it ran out. While I was debating whether to ask someone to phone the automobile club (my mobile wouldn't work) or give me a lift into town, along came Gary,one of those angels of the road. He wouldn't hear of me leaving the van and simply drove the 45 km to Eucla and back to get some. He wouldn't take money for this either, nor let me take his picture, but we did enjoy a cuppa and some of those yellow peril biscuits I'd bought in Donald. They tasted much better than they looked!
It was a pleasant time of year to travel. T-shirt weather by day. No bugs or flies. I tried to get all this information from the web and even consulted the RAC so here it all is for free. 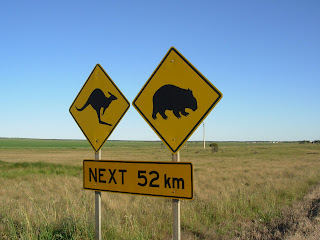 The tough, hard drinking truckies have gone since the introduction of strict drink driving laws and so have the stubbies that marked the roadway. The trucks are bigger - up to 36.5 metres long, fewer and newer. Sadly, most of the wildlife has gone too, despite the signs saying watch out for Kangaroos, Wombats, Emus and Camels. One of the highlights however, was seeing dozens of whales and their calves cavorting in the shallows at the Head of the Bight. 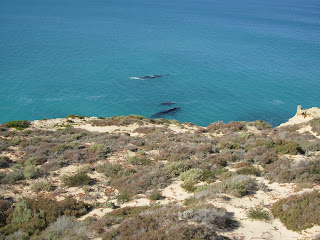 Whales in the Marine Park at the head of the Bight

The Plain itself was much greener – OK, sort of greyish-green anyway, than I had ever seen it -so Serengeti – like that you expected to see herds of wildebeest, large mammals or at the very least a Mutaburrasaurus ambling across those primaeval unfenced spaces. Alas, there were only small herds of grey nomads or the occasional lizard sunning itself on the road.

At first I was reluctant to drive after dusk, remembering the damage a big Red or Grey (kangaroo) can do to cheap Japanese cars, but after a while I noticed that there wasn't even any road -kill here and that at night the wind stopped and the slow moving caravans were safely corralled in caravan parks, so I kept driving. It was very peaceful under the great bowl of the Milky Way with only a full moon in the rear -vision mirror for company.

The only drawback was, that places such as Crystal Brook in South Australia and Cocklebiddy in the west, marked as major transport hubs on my Road Atlas, were shut up tight after dark. This contributed to the debacle in Eucla. After that, instead of refuelling once a day, I filled up at every opportunity.
Caravanners dislike vans like mine. They call them "Whizzbangers" because of the noise their doors make when they are opened and shut. In mine the alarm sometimes goes off when I move around. Most caravan parks also want to charge the same for a single person as for a double, so I don't often stay in them. Rest areas with facilities are few and far between and often crowded when you get there. Others offer little more than a rubbish bin and a bare patch in the scrub and these can be very isolated.

Small towns on either side of the Bight are another endangered species, victims of changing transport patterns, new roads, trucks with greater fuel capacity, the same drink driving laws and long years of drought. 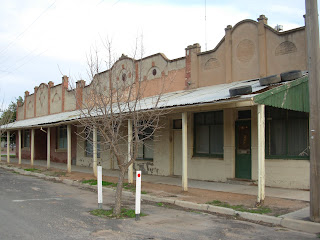 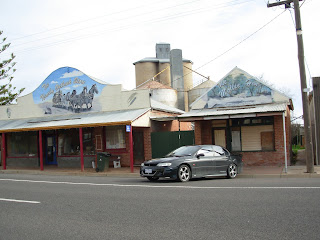 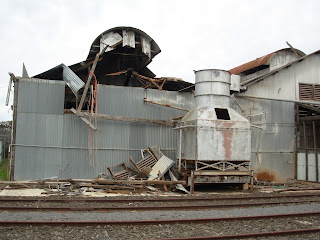 Abandoned Meatworks at Donald in the Mallee. The Country Cookie Factory was about the only thing still going but it does pride itself on being a tidy town winner and a plastic bag free town. 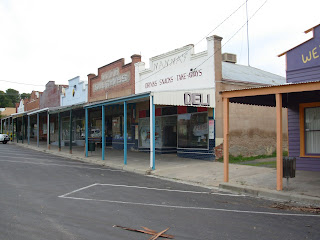 Murrayville appeared to be an exception. There were closed shops here too but it seems to be having a bit of a renaissance. After miles of desolate looking country it was green and the Field Days looked like a visiting circus or a UN convention - all those tents and flags. The $10 Counter meal at the Mallee Fowl Hotel caught my eye. New owner Dale is planning to add local produce such as Goatmeat Pizza with Local Olives. Lambross, a local farmer late of Sparta, via Coober Pedy, gave me a two batches of his olives and some good olive oil to try.

I mention to one of the farmers, that things aren’t looking too bad around here.

“Got to shut the gates to keep the crop in," he says in that dry country way. 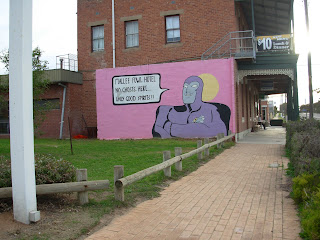 Stop if you see this sign - $10 Counter meals, friendly people! 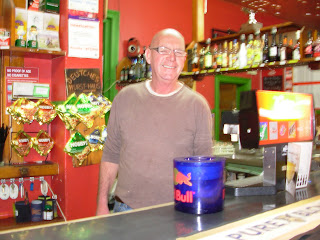 Dale the new publican has big plans, but the Chicken Schnitzel was the best meal I had along the way.

They explain that it's because they have ground water here. The pros and cons of irrigation aside – salinity is a problem in some places and yes, the Murray doesn’t look too healthy in these parts either, you have to admire people who have the courage, foresight and skill to turn this desolate –looking country into orange groves, olive farms and vineyards. 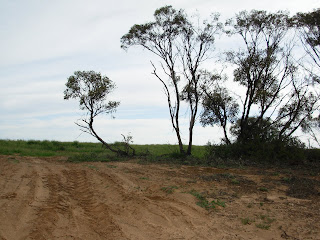 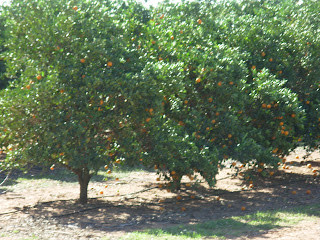 Water remains a problem almost everywhere else. “Please do not ask for water as refusal often offends” is a common sign in many places, though I did manage to get a shower each day.

Fuel prices are another killer. Up around $168.88 in some places. BIG TIP: Don’t necessarily go for the big new service stations. The older ones, in small towns and a little way off the road, are often much cheaper, even if some of them do close at night.

Fuel costs also affect the price of food. Small tins of tuna of which we get five for $2 on special at our local supermarket, sell for $3.20 each here. A tin of beans was $3.80 at Eucla and a Packet of Cuppa Soup – around $1 on special at home, retails for $4.20. Didn’t dare ask about much else until I got to Norseman where I found delights like olive bread, capsicum and Fetta. Had hardly seen any fruit or veg till then and when I did, it was taken away by Quarantine officers at three different border crossings. 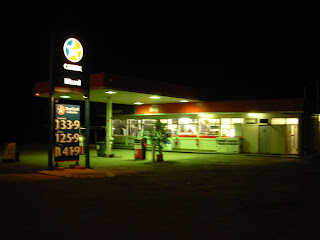 Nightlights, hisses, squeals, rumblings and terrasounds. Another friendly truckstop at Southern Cross. I feel like a baby elephant protected by the herd. I just hope none of those 32 Wheelers rolls over! 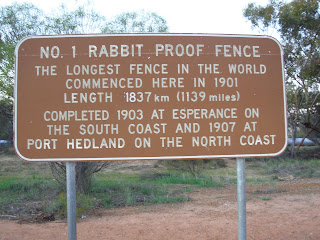 Rabbit Proof Fence
This fence was supposed to keep out the rabbits out which had become pests in the Eastern states. Today it keeps out exotic diseases 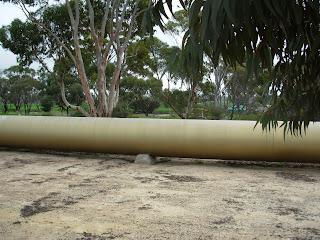 In Cunredin, they have painted their waterpipe gold. So they should. It is responsible for all its agricultural wealth. It pumps the equivalent of 25 six ton water trucks a day and all uphill. How do I know all this? There is an excellent museum here too in the old number 3 Pump Station. It's a story of scandal and innovation with many interesting sidelights. 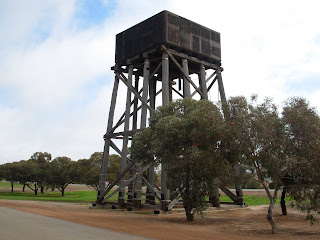