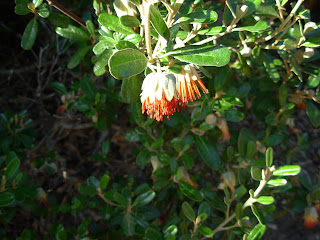 The last time I saw Western Australia, it was a dry and barren land with lots of bare earth and very little ground cover compared to Tasmania. This time though, it rained the whole of September, making it the wettest winter on record in 50 years and the plants have been celebrating with a riot of colour and variety unlike any I have seen, anywhere. Even a small patch of waste ground beside the visitor's information board in Augusta yielded three different types of orchids and the stoniest roadsides still produced an amazing array of plants and colours. The camera doesn't begin to do them justice - especially the flamboyant blues and reds, and the brightness of the West Australian sun tends to bleach them out, but for now you'll just have to use your imagination. Sorry, I don't know most of their names either
Spider Orchid 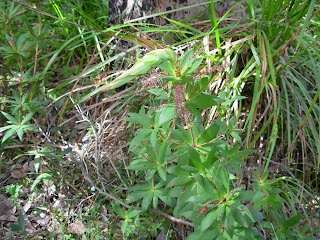 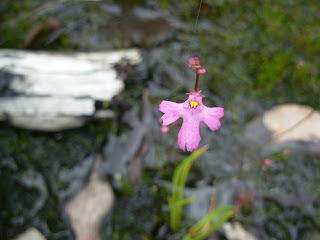 One of my first Orchids. Orchid Spotting became a bit of a passion. Have counted about twelve so far 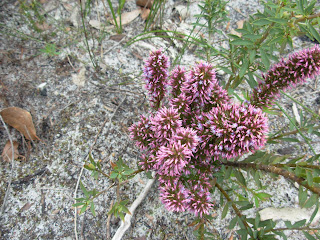 A tenancious Pink Flower growing at the edge of the road

The first journey took me around the South West, where everyone raves about the tall trees. Each small community has it's "Valley of the Giants." Maybe I have grown taller since the last time I saw them back in the seventies, or maybe it's because I've since seen Tasmanian Blue Gums which rank among the world's tallest trees, but I wasn't all that impressed. Karri trees are only the third tallest plants in the world and there's currently a dispute going in the Guinness Book of Records between the Canadians and their red gums and Tasmania's Bob Brown about a big blue gum in the Florentine Valley. Nice straight trees though and the Tingle trees were different, but Giants? Never! Unless you are talking about the potholes. 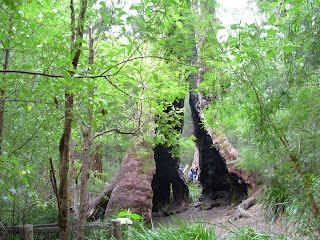 Amazing Tingle trees with no apparent means of support
There used be one so big that people would drive their cars inside, but it eventually did fall over. This one is duckboarded to protect the roots

On the Coast there is Albany, with the first 'A' pronounced as in cat or the locals will know you are a foreigner. This charming little town was the first settlement in WA and would have been the capital had it not been for the hasty establishment of Perth. It has a fine sense of history, well preserved buildings and an excellent market for local produce on Saturdays and Sundays. Really loved my organic "Over the Moon" brand Camenbert and my double strength strawberry jam, not to mention all the free samples, especially the yoghurt and the honey. Lots of lovely restaurants and galleries too, though I could not partake of either, not even the Distillery which charges handsomely for a taste, something which seems to be quite common in the west. Plenty of vineyards too and some spectacular scenery, beaches and fishing on the coast. Take the old road to Denmark for some lovely rural scenery. Walpole and Augusta are also pleasant stopovers, though perhaps not as diverse as Albany. 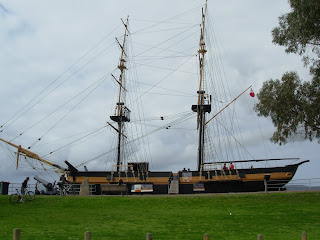 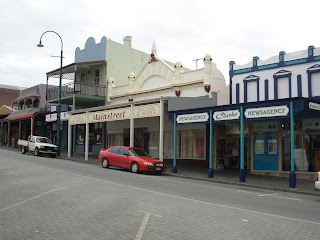 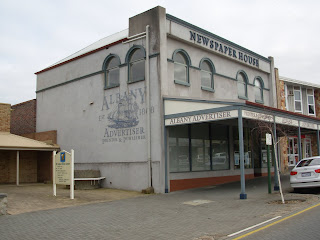 Dear to my heart 'The Advertiser' newspaper office 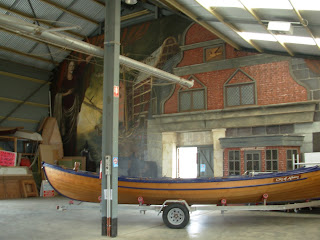 The Boatshed, scene of the delicious Sunday food market, Albany 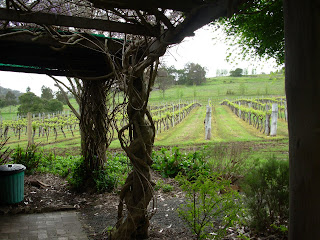 One of many charming vineyards in the South West 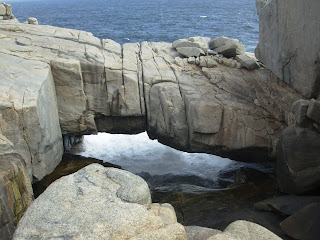 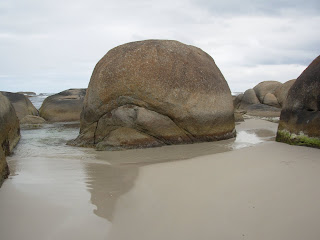 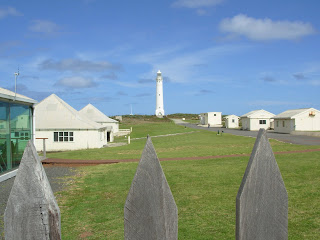