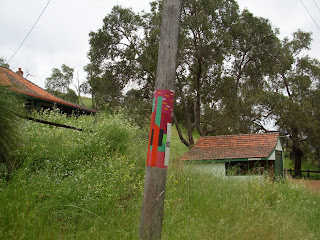 It seems that a lot of art is escaping from galleries these days and for the most part I don't mind that at all. I am often overwhelmed by too much of a good thing. I love it when the setting becomes part of the work, as with Antony Gormley's project at Lake Ballard or some of the various Art in the Forest or Art by the Sea displays.
There is another kind of outdoor art though, much more primitive - indeed a lot of it borders on kitch, but I do love the element of surprise in either the medium, the location or indeed, the subject matter. It says somewhere there is a creative spirit at work, or at least someone. This collection is by no means complete, just a few little things that have tickled my fancy here and there. 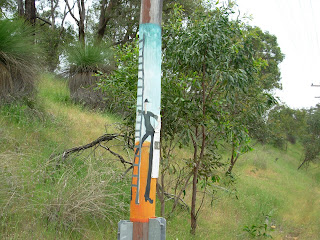 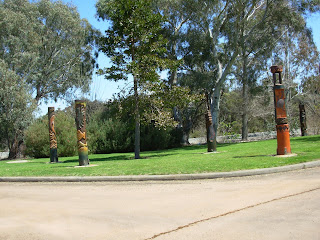 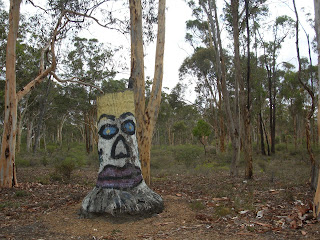 In Australia's vast open spaces it is almost enough to know that another human was there, particularly if it was one with talent or a sense of humour. 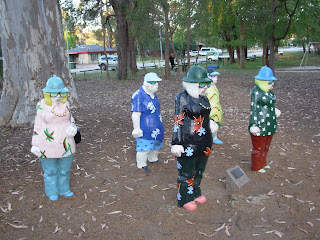 Help! The tourists are coming!
Sculpture in the Park, Mundaring 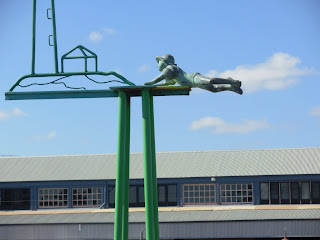 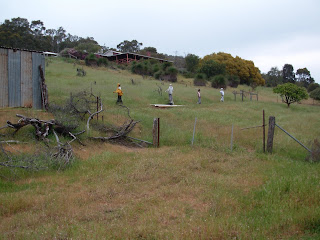 Peopling the Landscape -strange figures adorn the hillside at Chittering
Murals add interest to many a faded wall.
This one is at Westonia 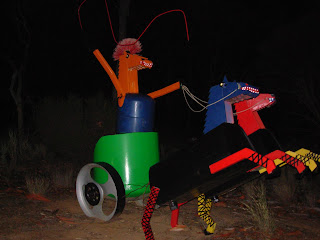 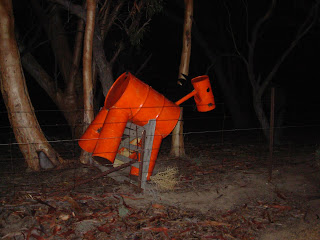 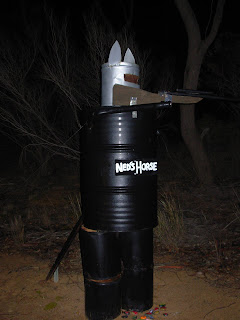 Horsing around.
Almost did a double take when I saw these apparitions near Kulin while driving late at night. There are dozens of figures like this, all made out of old drums. Oh I get it! Kulin is the home of the horse. I'm sure I will never forget. They certainly set it apart from all those other wheatbelt towns and add a little interest in what is basically a very monotonous landscape.
Those roadside 'attractions'

While you might cringe at the thought of Queensland's Big Pineapple or Big Banana, Tasmania's Big Potato, Rockhampton's big Bull, or Harvey's Cow (note that I have not included them here), these things do visually distinguish each place from its often very similar neighbours and etch themselves indelibly on the mind - yes, whether you like it or not.

Transformation of everyday objects
A lot of graffiti is ugly . I am not a big fan of tagging everything indiscriminately but in some places it's definitely an improvement. I am thinking of utilitarian objects such as miles of pipeline in Darwin or grey concrete bus shelters in Perth or those endless backyard fences you see from suburban trains. Tram art is a delight in Melbourne as are the junction boxes in Brisbane's Gap - I vaguely remember one covered in very lifelike ants - and these rubbish tins in Beverley, WA. 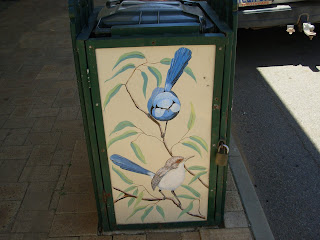 Who said rubbish bins had to be ugly?
This is one of several in the main Street of Beverley, WA
Wish someone would do something about those wheelie bins

I adore the often subversive grafitti in Hobart's underground Rivulet. There are declarations of love, some are purely artistic, some of it is political, philosophical or full of wit. Mostly though, they are about the joy of individual expression. This bit of Western Australian Grafitti definitely falls into that category. 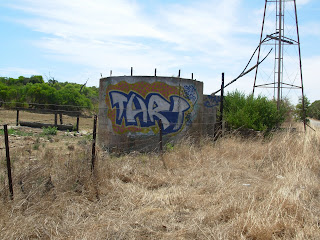 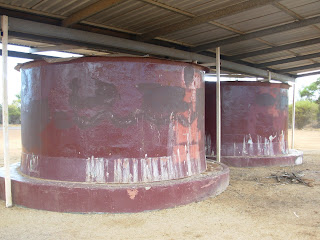 The case for Grafitti: How ugly is this?
Historic Tanks on the Great Western Highway.
This is one place where I wish they had left the graffiti.

Whoever scrubbed off the grafitti here, not only has no artistic sense but no sense of history. Imagine the people who would have passed by here over the last hundred years or so, before the road was built - Swaggies, stockmen, poets and rogues. Today's grafitti may be tomorrow's Lascaux Cave.
Of course there is that awkward stage in any object's life between growing old and grubby and becoming a valued antique, regardless of its imperfections.

I know this is a bit of a mixed bag and no, I don't want you to go around daubing paint on everything, nor do I want every other town to do the same thing, I just wanted to acknowledge originality and a bit of free spirited fun.