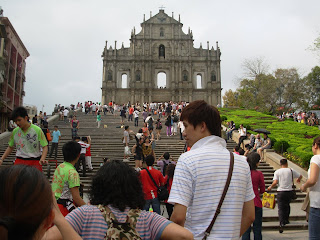 Tourists throng around the ruins of St. Paul's

There is something schizophrenic about Macau. On the one hand there is the architectural and cultural legacy of four hundred years of Portuguese occupation alongside an older Chinese tradition. Then there are the glittering palaces dedicated to hard core gamblers - a sort of adult Disneyland, cheek by jowl with the grubby high rises and narrow alleys where the majority of the people live. Then there is the extremely avante guard architecture of the waterfront set against ancient forts and Buddhist temples. The sacred and profane can to be found in equal measure- elegant churches and seminaries sit alongside the global brand shops in Senado Square or the thousands of tiny shops and stalls which crowd already congested alleys. 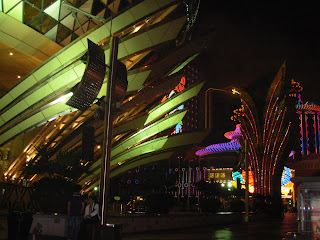 Disneyland for Adults - Two of Macau's many glittering casinos 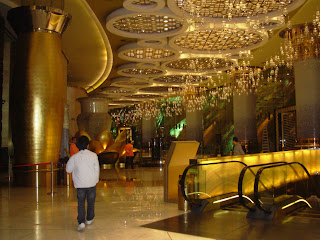 Interior of one of the casinos - Thank goodness they were open! 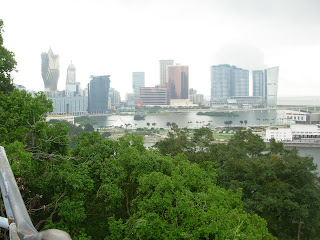 Ultra Modern Buildings on the Waterfront - Did the builders get it wrong? 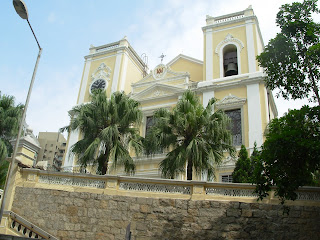 Church of St. Lawrence. One of many impressive churches and public buildings of the colonial era which are now World Heritage listed 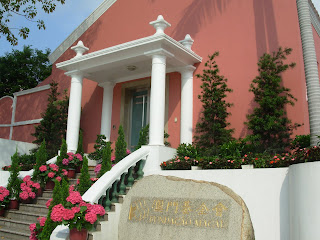 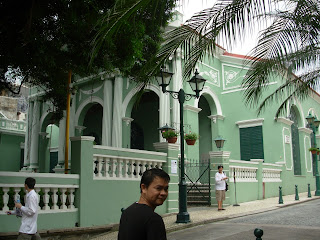 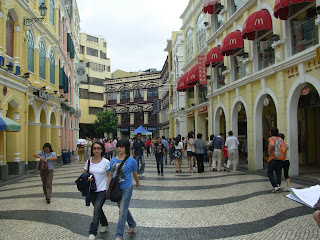 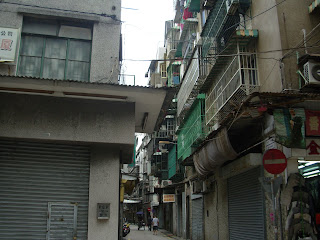 Typical high rises where most of the population lives
The whole place is an assault on the senses. For the eye there are the delicate pastels of the buildings, the flowers spilling from lamp posts in colonial style and the elaborate black and white mosaics which adorn the wider pavements and public squares. It feels oppressively hot and humid. People press in from every side and speak in a hundred different accents. The nose is assailed by the smell of incense from temples and tiny shrines, the aroma of Starbucks coffee mingling with that of freshly baked bread and delicate pastries. Pungent and sickly sweet smells emanate from backstreet restaurants and sewers. One alley is devoted entirely to the luscious smells of confectionery being made. Above the roar of traffic you can occasionally hear the sound of birds trilling or the sharp clap of fans as people practice Tai Chi in front of the A-Mah Temple.
My own experiences were mixed too. Only the golden casinos were open when I arrived at 2 am. The staff were kind enough to put my pack in their cloakroom while I looked for somewhere to stay. "No room" was the answer everywhere because hundreds of high rollers flock in from Mainland China to gamble the weekend away. What felt even worse was that no one seemed to care that they were sending me out into the street in the middle of the night in a strange city. For all that, it was warm and proved to be fairly safe.
In the morning with the help of a local - I was pleased to discover that there were one or two friendly folk around - I found a tiny room in a seedy hotel. Like the rest, they were charging double rates at the weekend but, having been up all night I was past caring and gratefully fell into bed. The shower was great. Later I trailed along with the crowd through alleys and Senado Square to the impressive ruins of St. Paul's Cathedral, a popular tourist mecca. The smell of pastries was too much to bear so armed with a croissante, a delicate custard tart and something with chocolate on it, I headed on up to the Mountain Fortress for a great view and a feast. By nightfall, hungry again after walking for most of the day, I scoured the alleys around the hotel and found some kind of stir fry and rice for dinner. Tantalising smells also came from the confectionery stalls but no one would sell me less than a kilogram so I went from one to the other sampling peanut toffee and sesame bars until even I had had enough. Next morning I took a bus intending to visit the A- Mah Temple but ended up losing quite a bit of money when the driver told me to put my $10 note into a machine that gave no change. I was a bit miffed about that since it was only supposed to cost about $3, but I made the bus driver take me on a trip around the town until we had used up all the money. That pleased everyone. A- Mah is the goddess for those who make their living on the sea and very possibly gave the island it's name. The temple itself is impressively set over several levels on massive outcrops overlooking the sea. When I finally got there, people were earnestly engaged in morning exercises of various kinds including Tai Chi. It is one of the few green spots and open spaces and enjoys a refreshing sea breeze. Away to the south the delicate looking Sai Van Bridge stretches it's double decker steel tendrils towards Mainland China, closely guarded on this side by the somewhat sinister -looking Gate of Understanding. Unlike the other bridges, this one is typhoon proof which is somehow symbolic of unbreakable bonds. 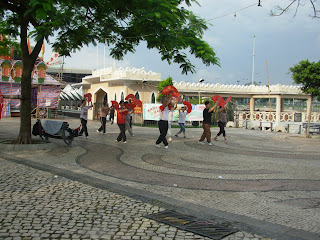 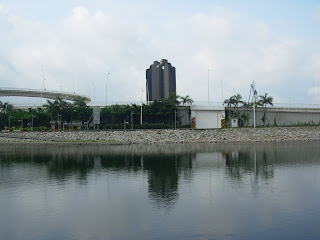 The Gate of Understanding 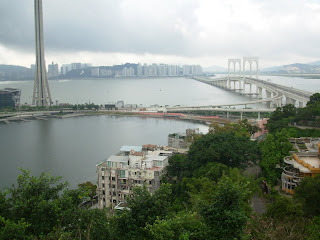 Webs of steel connect Macau firmly to mainland China
After that, I walked again for most the day - through the city, up and down hills, down narrow lanes, past markets, more impressive churches and finally, to the Guia Fortress in the East. This one has a beautiful solid Portuguese lighthouse and chapel on top and a WW II air -raid shelter underneath. The area around this fort is also a favoured exercise spot. It seemed that most of the play equipment is designed for adults rather than children and the paths were full of panting lunchtime joggers no doubt running off those pastries. 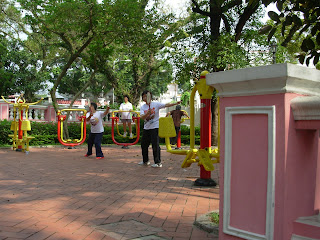 Playgrounds for Adults on surrounding hills 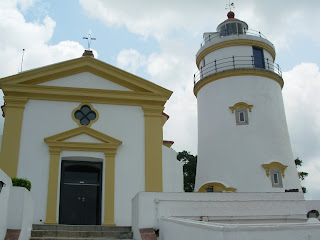 This Portuguese- built lighthouse on top of the Guia Fortress was the first to be built on the coast of China
There was just one more thing I wanted to see. I had heard that Macau had bird singing cafes where people took their birds out to tea so that they could socialise too. I thought that was a lovely custom, but once again, no one knew what I was talking about, not even the tourist bureau. I did see a little bird cage at a garage for the ubiquitous motor scooters, but there wasn't a lively cafe with birds to be seen anywhere. Torrential rain started pouring down while I was out and I was drenched to my underwear. I shouldn't complain. Large parts of Southern China were flooded that day, but I was a bit depressed and bedraggled as I went back to the hotel to pack. There was a restaurant just off of their lobby and lo and behold, while I stood there waiting for a taxi, a man brought his bird cage in and parked it there while he went in for lunch. It wasn't quite the spectacle I had imagined, but at least it proved that the tradition hadn't completely died out. 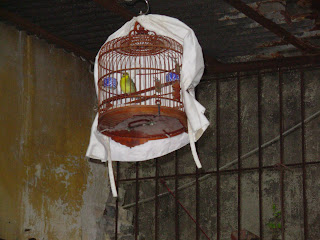 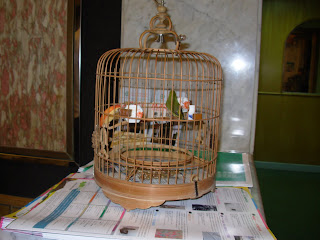 At last- a bird in a restaurant, well very close anyway.
My Macau story wasn't quite over. When I arrived at the airport to board my plane, the Air Macau staff wouldn't let me board without a Chinese Visa, even though the embassy had said I wouldn't need one as I was travelling on to a third country. A frantic dash back to town, more photos, an interminable wait and much money later, I was finally back at the airport clutching a Visa, but much too late for the plane. Having missed not one but two connections and unable to contact Air China "All our lines are busy.... etc", there was no choice now but to pay another fare to Beijing, rather than miss the last flight out for the day and thus my next flight as well. So much for cheap airfares. You get that sometimes. My chagrin was marginally appeased by the very pleasant service on the plane- such a contrast to that between Singapore and Macau - and the fact that they also served meals and good coffee without charging anything. Thanks Pan and Fiona for restoring my spirits. 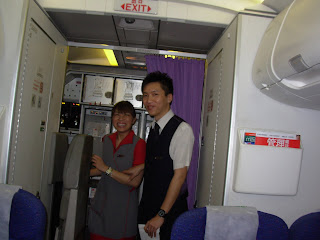