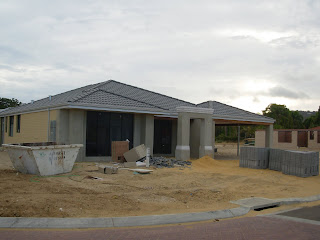 Lest the foregoing posts make it seem that everything in WA is old and or abandoned, that is most definitely not the case. The City of Perth is compact but has all the attributes of a modern city -gleaming towers that reflect the blue of the skies, lovely river front parklands, one of the oldest universities in Australia, trendy shops and eateries, world class entertainment and a zoo, but except for its bell tower, there is little to distinguish it from anywhere else. There are your Maccas, and Targets and all the other retail chains. All very handy when you need them, but a bit bloody boring to look at when they all look the same. I am looking for those things which make a place different. 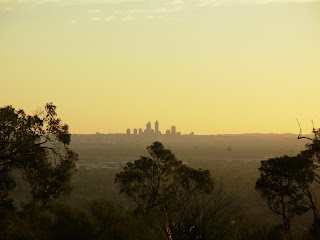 By far the majority of the population appears to be living in endless new subdivisions springing up north and south along the coast in almost identical houses of four bed, two bath configuration, or the odd ‘lifestyle’ village intended for retirees. They remind me of those even –aged timber plantations that pretend to be forests but are totally devoid of any other form of life. Not only are these houses visually uninteresting after you have seen a few hundred, but their stories have yet to be written. They remind me of the new mining towns – functional and more comfortable to live in, but nowhere near as interesting or charming as the old ones. 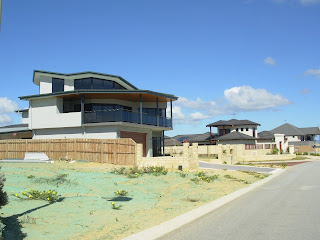 There is a massive building boom going on all around Perth, especially along the coast where it stretches almost as far as Geralton 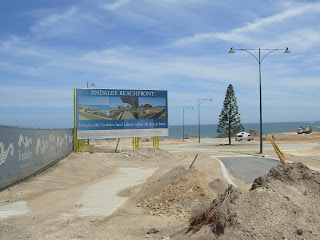 Thought Brighton Beach would be a nice place to have lunch
except it was in the process of being transformed into another exclusive 'lifestyle' community and I was chased away by the builders. 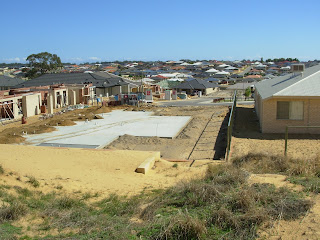 I tried to find two lookouts shown as scenic points on my GPS.
'Gentle Paul' turned out to be a Shopping Centre and 'Secret Harbour' dumped me in the
middle of a new subdivision. 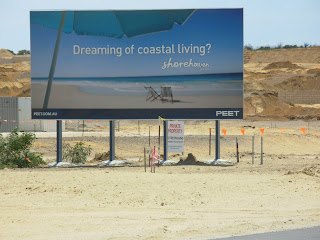 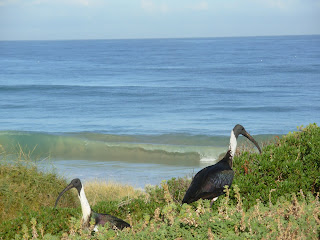 The birds don't mind coastal living either. OK I just wanted to put this photo in. These guys popped out of the bushes when I finally found a bit of beach that hadn't been paved over or fenced off.

To understand the West or even the local style, you have to leave the main highways and head for the older places, the old roads and the outback where its wealth was and is being created and these styles evolved. Here you see considerable diversity in building as people experimented with available materials and struggled to come to terms with the demands of a harsh climate and vastly different land.

Initially, where timber was scarce, they used tin, mudbrick and local stone – even cemented shell blocks in the case of Shark Bay. Then they added verandahs, breezeways and in grander places, towers that sucked in cool air. There may be elements of the colonial experience as well. In Colonel Sanders’ house, built at the Convict Hiring Station in Lynton in around 1853, the door of each room opens on to the verandah to catch the ocean breeze, an Indian idea which I have seen used in other fearfully hot places in the outback, such as the Great Western Hotel in Cobar. The nice wide streets in most country towns are owed to the cameleers and bullockies who brought in supplies and needed to be able to turn around large teams. Eventually, with the arrival of large numbers of Italians in the 1950s, came lots of paving, cement rendering and large open entertainment areas – very much the style you see now, though minus the balustrades and lions. 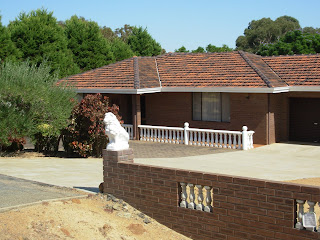 Not sure who to blame for the impressive gates – perhaps pastoralists with delusions of grandeur, but in the cities, they appear mainly on newer buildings, so I am thinking that perhaps it’s the Rose Porteous effect (wife of Australian iron – ore king – Lang Hancock) after the construction of her Paradise de l’ Amour. Her other legacy appears to be the profligate use of bricks.

Here and there there is also something of a Spanish influence – arches, red tiles and a kind of low bungalow style especially evident on the Great Eastern Highway between Mahogany Creek and Northam. A pastoralist and meat works owner who imported his cattle from Spain, got the ball rolling by building his grand El Caballo Hotel and it looks like the neighbours were inspired to do the same. The beachside township of Yanchep also has a number of houses in this style. Certainly Mediterranean style, whether Spanish or Italian is so much more suited to this climate.

Not sure either where the “city wall” concept originated. It doesn’t seem to have existed prior to the building boom inspired by Alan Bond’s America’s Cup Challenge in 1987. Maybe Florida’s gated communities? 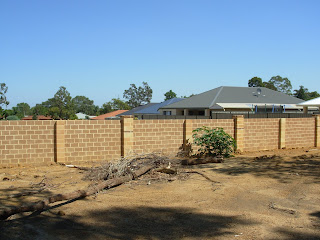