Back in the Wild, Wild West – Day 3 Picking over the bones of old mining towns


Undeterred by my friend’s departure, I decide to continue with the itinerary I’d planned which took in the Pieman Ferry and some waterfalls I hadn’t seen before. I take the coast road between Strahan and Zeehan built over the railway line which connected Zeehan and Strahan when Zeehan was the third largest city in Tasmania. This is a lovely smooth road over button grass plains with far fewer bends and hills than the one from Strahan to Queenstown. There’s hardly any traffic on it either. After about 10 kilometres it passes by the Henty Dunes, 30 metres high and extending for 15 kilometres. These are some distance inland and date from previous Ice Ages when sea levels were lower, but the still powerful Roaring Forties blew even more strongly.
At the Mt. Dundas lookout about 7 kilometres from Zeehan I notice that there’s quite a thick haze which has been getting progressively worse since Strahan. There’s still no signal on my phone, so I call in to the Supermarket to see if the Fatman Barge is still going across the Pieman. No one’s sure. There have been fires. “Better ask the Fire Brigade,” says the lady behind the counter. At the fire station I learn that there are 27 fires burning across the west coast but that the Pieman Ferry is still operating.
In 1901 Zeehan  with around 10,000 people, was the third biggest town in Tasmania. Known as “The Silver City,” 159 companies had leases in the area and its streets boasted seventeen hotels, banks, a stock exchange, the School of Mines and Metallurgy, a newspaper and the largest theatre in Australia at the time.  Alas, its rich silver seams had almost run out by WW1 and the population dropped to 650 by the 1950’s. While fire has claimed many of the wooden buildings, remnants of its former glory can still be seen on the main street in buildings such as the still superb 1,000 seat Gaiety Theatre and The School of Mining which is now a museum visited by some 25,000 people a year. Good to keep in mind for all those wet days.

Emboldened I go to the petrol station to top up the tank. There wouldn’t be another one for 109 kilometres.  It’s an automated service station. I put in my card. The first pump doesn’t work, neither does the second. I try again. No luck! The receipt keeps saying I have timed out. Then someone tells me that there’s another service station on the far side of town. That’s automated as well. In goes the card. I try the pump. Again no service, but this time it says, “Card declined.”   I call the bank.  I have mobile reception at last.

“After three failed attempts on your card, we lock all your accounts for 24 hours,” says the friendly call centre person in what must be some distant land. “No, there’s nothing we can do. Not even a manager can change that, but if you go to a NAB ATM, we can give you a new pin.”

“I’m just looking that up now. There’s one right near you in Wynyard.” She says brightly.

“That’s 152 kilometres away,” I moan. “I doubt that I’ll have enough fuel for that.”  She obviously has no idea about Tasmania. It does look rather small on the map, but that’s 152 km. of winding road and a couple of mountain ranges away.

It’s also Sunday morning.  I ask around the town without success. If the caravan park at Strahan hadn't taken most of my cash, I might have been able to bribe someone into using their card and giving them the money, but now that isn’t an option.  No use going via the Pieman now if my card didn’t work.  I wouldn’t have enough money for the ferry either. Perhaps I would have better luck in Rosebery, only 29 kilometres away and the second largest town after Queenstown. At least I was known there since it was my nearest shopping town for ten years.

Rosebery (pop. 1052) too seems to have fallen on hard times. There are lots of empty shops and ‘For Sale” signs. Indeed, Wiki says that the population declined by 22% between the 1996 and 2001 censuses, though its mine is expected to go on producing 24/7 until 2024. Mineral wealth to the tune of $80 billion has been extracted from this region and despite occasional booms and busts, the towns have usually recovered with a change in technology, better access, higher mineral prices or new discoveries.
What is different this time is that access has improved so much that many miners and their families now live on the coast in the more salubrious climes of Burnie, Devonport and elsewhere and the workers drive to and from work, though they may stay in the town during their shift. This has ripped the heart out of these mining towns. The community spirit and the need for self reliance which bound people to an area is beginning to unravel.

The pub is closed this morning. One of the two former service stations is closed. The other is also an automated one and rejects my card too. The people in the supermarket are strangers and they don’t have Paywave. Nor can they give any money out. The petrol station in the next town, Tullah, is closed too, but there is one in Waratah, about halfway to Wynyard and Burnie. I already know it has reasonably priced camp sites because I was planning to stay there anyway – just not yet.  I assume that they would let me stay overnight and pay them the next day, or failing that, I would at least be close to the main North - South Highway, if I did have to drive to Burnie or Wynyard and ran out of fuel.

In contrast to the other towns, Waratah (population 206 at the last Census) looks neat and perky, not the ghost town it was the last time I saw it in the early 1980’s, before the coming of the Que River (1981 – 1991) and Hellyer Mines (1989 -1991) which brought new life to what was the birthplace of the West Coast’s mining history. The discovery of its “Mountain of Tin” by “Philosopher” Smith in 1871, not only sparked a frenzied prospecting and mining boom  in the unsettled, mountainous west of the state, but saved the Tasmanian economy at a point where it was having to consider attaching itself to Victoria. The trials of those early prospectors surviving without roads, transport, regular communication in densely forested country plagued by rain and snow, are the stuff of legends. Check out Binks, C.J. Pioneers of Western Tasmania, (Blubberhead Press, Hobart, 1988) to get an idea.
As he writes of the prospectors (p, 57):


“Though there were times when they hated the monotony and the drudgery, the unending toil and damp and cold, they relished the independence of the prospecting life, it’s satisfactions in enduring hardship and its practical challenges. They valued the old friendships and the easy mateship of the camps, where a man’s past mattered little and where he was judged on his ability to stand the rigour of the life and his willingness to give a lift or a helping hand when needed. And though the life was rough and uncomfortable, and its returns meagre, there was always the knowledge that somewhere in a misty  future there waited on some distant hillside not a dazzling El Dorado, but some workable lode which could be sold to the developers for a modest sum that would ensure the future. But stronger even than this was the yearning of the restless spirit for the freedom of forest and plain…


I can relate to that.

To my delight, Waratah still has a service station and roadhouse run by people. It also has Paywave and I am able to get some cash for the ferry as well as fuel, so after admiring the Waratah Falls right in the middle of town, I drive another seven or eight kilometres to walk Philosopher’s Falls.
I'm glad my friend is not with me. Though the map said it was only five minutes off the road, it didn’t say that then it’s a 1 ½ walk from there down about 1000 steps and then up again, though the falls are well worth it. 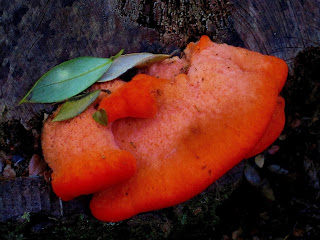 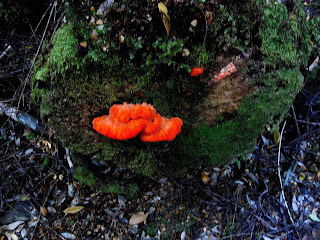 When I come back, the van's brake lights are on.  The brakes are cool and work fine, but the brake lights are hot and no matter what I do I can’t get them to go off, not even after the long run through Savage River and on to Corinna. In hindsight, I should probably have gone back to Waratah, but had hoped there may have been some help at Savage River, shown as a big dot on my map. It's really only a mine and a collection of sheds and doesn't even have a public toilet, though there is one marked "Men." I continue on the historic white gravel road to Corinna, but after a quick look around - it's dead flat, I perch on the long hill outside the town expecting to be able to roll start the van if the lights drain the battery overnight. At least they will work as a trouble light and stop people running into me while I sleep.