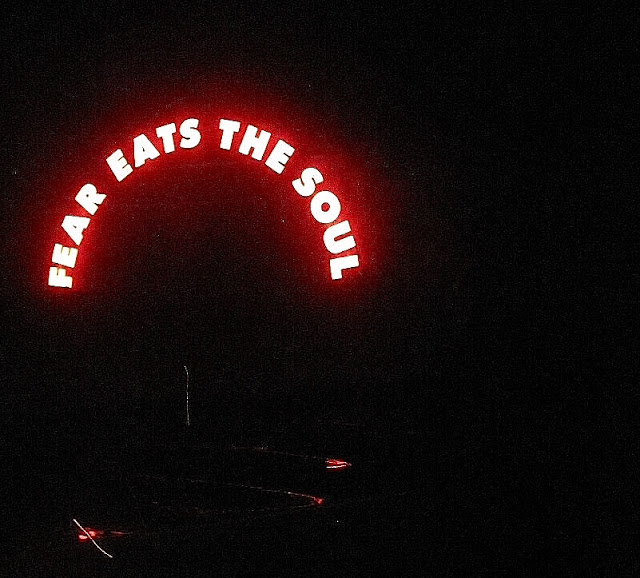 Winter has come to Tasmania with a vengeance. Today there’s snow to 400m and before that we had heavy rain and screaming winds for a week. In the north of the state they had the worst flooding in 85 years. It gets dark at 4.30 p.m.

Despite the temptation to hibernate, preferably in bed to keep warm, it is our first fine evening in quite a while, so mustering all my courage and my Nepali jacket - they know a thing or two about cold in Nepal, I head downtown to experience a bit of Dark Mofo.

Now in it’s fourth year, Dark Mofo is Tasmania’s winter festival inspired by MONA’s themes of death, darkness and sex. How better to fight the cold and the dark than in true pagan tradition with fire, food and fellowship?

The theme colours of red and black glow from city buildings as I make my way into town. In Dark Park, one of the venues, triangular obelisks spew forth flames at regular intervals lighting up small knots of people clustered around burning braziers. The flames not only feel warm, but give off the most delicious scent of eucalypt, of bush and of long forgotten fires.

I follow the red glowing lines that take you to various attractions in the park. It is set in the old industrial heart of the colony – behind the Gasworks with its tall chimney, behind the Wharves with their long sheds, in front of Henry Jones’ old Jam Factory and the former foundry, their architectural details picked out in ribbons of glowing red. It’s definitely our new red light district tonight. Beyond it the cenotaph glows darkly.

After wandering around for a bit, I come upon the long queues lining up for the House of Mirrors. Why not? It proves to be a remarkable installation, well worth the $10 it cost to go in.


I’m not quite as thrilled with the next group of attractions in the Arts Building. Here too the queues are long but at least admission appears to be free. The scents and the music are evocative and deeply relaxing, yet visually I am somewhat disappointed. There are more queues lining up for Bodystorm, but  I follow the red ribbons of light through a food hall and a packed food court where people are balancing waffles and icecream, tacos and drinks. The mood is upbeat and people are good natured despite having to queue for everything, even the battery of portaloos. It's a funfair for grown - ups, with scary bits. I pass Reuben still working on a mural and venture into a light show which looks like constellations of planets moving and bending to music in the dark.

Another shed houses a giant papier maché sculpture of a sea serpent the Ogoh –Ogoh, made by the Balinese contingent which is still working on the scales. Each New Year, such figures are carried through Balinese villages to attract dark forces and evil spirits and they are subsequently burnt to restore harmony between the spirit world and the world of humans. Here we are invited to write our regrets on slips of paper and post them into the body of the beast which will be burnt on the solstice. It’s quite satisfying and something truly different. That’s one thing you can count on at Mofo.

There are big queues waiting at the maze, so I eschew that for some live music – a South American Band playing in the Tasmanian Brewing Company’s shed, and then make my way slowly around the block. The evening’s performance of “Lustmord” in Shed 2 has not yet started. There are lots of other activities around the town and further afield at MONA and other venues including the long time and rather creepy former Mental Hospital at New Norfolk, but that’s about as much excitement as I can handle for one night. I'm pleased to report that I didn't feel cold once!

You can see the full program which runs until 21/6/2016 here. While I may go along to some of the exhibitions and dark music gigs, I promise I will not be lining up for the dawn nude Solstice Swim! However, it is good to see so many people out and about and or coming to Tasmania especially for Dark Mofo. Last year it attracted 174,000 visitors with 8,000 of them coming from interstate or overseas.