Variation and Succession – A gallop around Lesmurdie Falls


Lesmurdie Falls are quite high and lie on the edge of the Darling Scarp.This huge scar on the landscape runs for over a thousand kilometres and can be seen from space. The fault upon which it lies marks the point where Australia broke off from India some 135 million years ago. It also contains some of the world's oldest rocks - magma intrusions thrust up from the centre of the earth around 260 billion years ago. Though now around 30 km inland from the sea and the city of Perth, its edges were sea cliffs  a mere 200,000 years ago when sea levels were higher.

I had visited these falls once before at the height of summer and after a long period of drought  and they had been rather disappointing. Now, after what has been one of the wettest winters on record, they were not only flowing magnificently, but the surrounding bushland was green and alive with the harrumphing of frogs, the squawking of birds and the chirrup of humans or maybe the other way around.  The wild flowers were abundant too, buzzing with bees and insects especially among the white flowering shrubs near the base of the falls with their all pervading smell of honey.

The wildflowers were perhaps not as rich or diverse as on some of my other short walks but they did display considerable variation. The mouse ears for instance, which I had admired earlier come in shades of orangy red here, rather than pink and are slightly smaller.

In fact everything in WA seems to come in a great variety of colours and forms - from upright shrubs, to prostrate ones and vines. Though blue flowers are still my favourite, here they are represented more by a nightshade species and by a straggly grass -like shrub with many tiny bell flowers. The blue lady shown previously often tends to purple in some areas and the big blue pea flowers which I have previously only seen as a vine, can also be found  densely packed on a medium shrub or as a sparsely flowered upright plant in its own right. Much of this can be blamed on the on the substrate. At Lesmurdie this is really obvious, because quite different species grow on the darker, older granitic rocks than on the reddish remains of dolorite.


New species continually replace the previous ones and it has been fascinating to watch the changing procession of plants as spring marches on. The kangaroo paws now display neat rows of teeth, some of the brown and yellow pea flowers have turned to seed and new species have taken their place.  In previous weeks, I have often wondered what the red lobed ground – hugging plants were, but at Lesmurdie they have unfurled into their full glory – often over a metre long with tiny sticky pads and an innocent white flower at the top. Now I can see that they are sundews - a very dainty carnivorous plant. I had also wondered about small round spiky things I’d seen which looked rather like sea urchins. These turn into trigger plants of which Western Australia also has an enormous variety. They are also carnivorous. Thank goodness they are only small! See the  G'day from WA pages under Trigger Plants to see how this mechanism works. 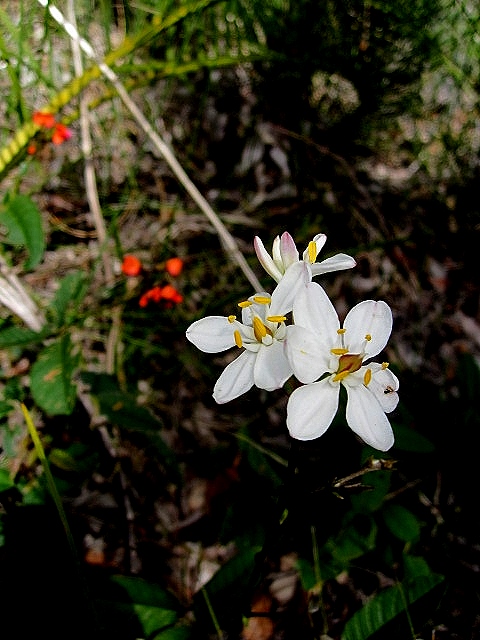 Saw some wonderful flowers along the Zig Zag Track today - another part of the Scarp, but these will have to wait until the next time I'm let off the leash.
Email Post