It’s official. It’s winter now, but yesterday was our first fine day in a while. Or at least that’s what the weather bureau promised, so my long suffering walking buddy hauled me off to Mt. Field.

It was still overcast and gloomy as we made our way up the narrow Lake Dobson Road, but suddenly we were above the mists and in the most beautiful alpine wonderland. Little pillows of snow lay on the moorlands and the mountains beyond carried a delicate dusting of snow. Curiously it’s not at all cold and there’s not a breath of wind.Yes, we may have missed the fagus this year with its glorious autumn display and we’d missed the summer wildflower show, but don’t think there’s nothing to do or see, just because it’s winter.

Once the showier plants have gone, you notice more subtle things such as the colourful trunks of the Snow Gums, the fresh greens of mountain pepper and conifers, the mosses and lichens and the great diversity of moorland species which cover the spaces between sparse eucalypts and rocks. It’s also the perfect time to see Russell Falls in full flow, though we don’t do that till later. The other good thing about winter, is that there's very little traffic on this road and the few people we do meet are smiling and friendly.

There are a lot of interesting walks up here – to mountain tarns and rivers, over peaks and valleys and so on, but most of them are too long for us today because my friend has to leave early. We set a timer and walk the Lake Belcher Trail as long as we dare. The early part of this walk is duck -boarded to the end of the Moorland Mosaic, but with a bit of ice and snow on it, care is in order even here.  After that, we lumber about in snow and mud. It’s a bit disappointing that by the time the timer goes off, we haven’t arrived anywhere in particular, but it’s exhilarating just being out in the fresh air and sunshine.

I discover my first Mt.Mawson  pine (Pherosophaera hookeri) though I didn't know what it was until I got home and must admit I was expecting something a bit bigger. We throw a couple of half - hearted snowballs – not too hard, I didn’t want them shoved down my neck; make a couple of stops on the way down and do a quick lap of the new improved Russell Falls Circuit. 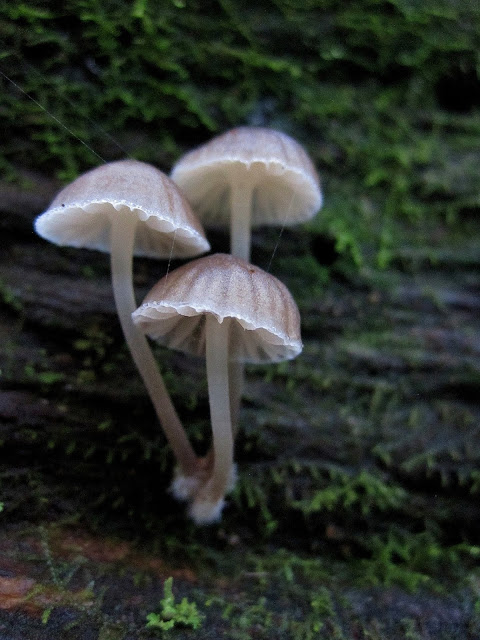 If you walk up the track a bit now after you cross the little bridge, you can see the full extent of the falls whereas before you could only see two levels. It’s a short easy walk – 25 minutes return and the left side has been levelled and tarmacked to make it suitable for prams and wheelchairs.
There are a few fungi about too, but it’s already too dark to take photos – perhaps the sun never reached here at all. It certainly feels like it.  It’s "put on the ski gloves" cold and I would kill for a cup of coffee.

We have a pit stop in Westerway, just before the National Park where tiny cottages hug the Tyenna River. One of these is the Possum Shed, a gorgeous little place whose rear deck overlooks the water. On a good day you can see platypi from here, but I don’t linger outside that long. Great coffee, great day. The cakes were pretty good too.

By the way, if you get the chance watch David Attenborough's "Tasmania." He captures much of the flavour as well as some excellent footage of our native animals.