Franklin - A stroll through history

I was intrigued by Franklin (Population around 400) which lies in the Huon Valley some 45 kilometres south of Hobart. Amid the straggle of charming cottages along the main road are some very substantial buildings such as the Palais Theatre, its pub and the bank, which attested to former glory, when so few other villages of its size boasted such amenities.

Franklin seems favoured by both geography and history, or at least it was at the beginning. In the first instance, it lies on the wide Huon River, inside the D’Entrecasteaux Channel, making it a safe harbour for early explorers, starting with Bruni D'Entrecasteaux in 1792. Later it became an important port for the export of timber and produce and especially apples, which despite initial misgivings about the quality of its soils, it produced in abundance. Historically speaking, unlike other towns such as Dover or Cygnet, it enjoyed the distinction of not originating as part of the penal system, having been established in 1839s by Lady Jane Franklin (Governor Franklin’s wife); for the benefit of honest free settlers whom she personally interviewed, after purchasing the land from her own purse.

Although many of the original settlers left "The Settlement" as it was called, for other acreages in the vicinity -for example, the Geeves who founded Geeveston and the Judds, who started Judbury and planted the first apple trees, the little town continued to thrive, especially while the river was the only means of access to the region.  As many as 32 ships a month passed through the area collecting apples and other produce from the many jetties. Boat building also became important. In 1850, the town was renamed Franklin in honour of its benefactor and went on to become the Huon Valley's major population centre and industrial hub. In 1916 it even had its own small hydro -electric scheme on Price's Creek.

Speaking of those heady times, one John Skinner of Huonville recalled,”

"A trip to Franklin was the highlight of our existence. It was a big bustling town then, with trenches of all the big Hobart stores... Friday night shopping was a marvellous treat. It was a blaze of light..."

So what happened? The residents of Victoria (now Ranelagh to avoid confusion with the State of that name and other parts of the district) further upriver, had long clamoured for a road from Hobart. In 1855 a track was finally built, but instead of going through Victoria it went where Huonville now stands. A coaching service followed in 1869 and soon a hotel, shops and a wharf sprang up aided and abetted by a convict station. With the building of the bridge from there across the Huon in 1876 the importance of shipping, the mainstay of Franklin, began to decline.

In 1920, administration of the Huon Valley which now included other growing communities such as Cygnet, was relocated to Huonville. This marked the beginning of the end for Franklin. It even lost its hydro scheme which came under the control of the state operated Hydro Electric Commission in 1929.

Remembering the machinations about the pipeline in Western Australia, which lead to the fall of the towns which missed out, I couldn't help wondering what underlay those decisions. Was there rivalry between the emerging townships such as there was in the late 1990s when the councils were ordered to amalgamate? At that time (1990s), the Geeveston Mayor, pointing across the river to where Cygnet lay, said, “That’s the East Bank. This side is the West Bank, and in between, well that’s the Gaza Strip and none of them will ever come to any agreement.” 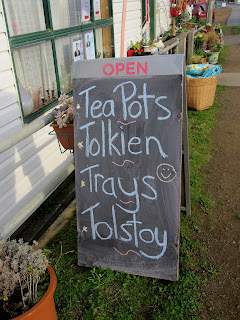 Nevertheless, Franklin could still have the last laugh. While Huonville gets bigger and busier, so busy you can no longer get a parking spot on its main street, Franklin remains a pleasant stopover. Its quaint shops and cottages provide a range of food and accommodation as well as galleries and craft outlets. Many have also become the new homes of “Sea Changers.” Nor is there any shortage of entertainment. As well as the offerings at Frank’s Cider House and the Tavern, the fabulous Palais Theatre hosts concerts, a regular market and vintage movie nights and remains the home of the Franklin Folk Club.  Franklin also proudly boasts the only remaining Wooden Boat Building School in Australia and the wharf remains the starting point for river cruises and tours.


Footnote:
Beyond the wharf, in the middle of the Huon River, lie the Egg Islands, a conservation area for the protection of endangered species including seven threatened birds, one fish, one amphibian and two invertebrates and several plant communities. Residents have also worked hard to rehabilitate and defend Price's Creek where its power station once stood.