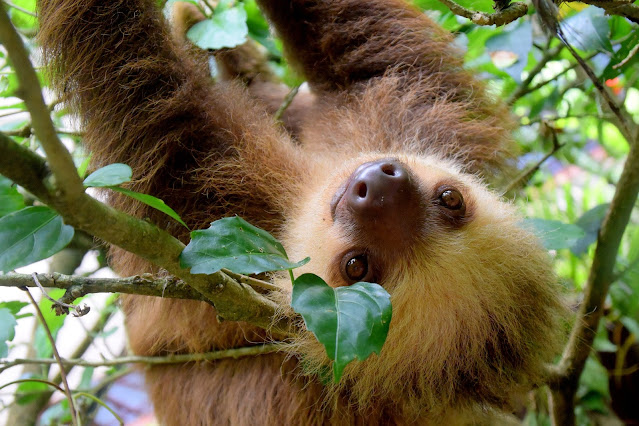 -Image by Minke Wink from Pixabay

Oops almost missed it. Did you know it was International Sloth Day today or yesterday depending on which side of the Dateline you are on?

Sloths are endearing, slow moving creatures of the rainforests of Central and South America. They are not lazy as has been reported. They just move very slowly and are able to slow their metabolism right down. Until recently this has been an excellent survival strategy. They move so slowly that creatures which prey on them don’t know they are there. This has served them well for the last 35 million years or so. Their other trick to evade predators is that they attract green algae which afford them camouflage among the leaves. Though some species have evolved to be good swimmers, most rarely come down from the trees and spend most of their time hanging upside down from branches even when they give birth. Normally they are nocturnal and subsist on leaves, fruit and insects within their reach. You can read more about these remarkable creatures here or here. Did you know for example, that until 10,000 years ago there were also giant sloths and although often referred to as having  two - toes or three toes, this in fact refers to the number of fingers they have?

Unfortunately, like so many of our fellow creatures – both cute and not so cute, two out of the six living species of sloth are now under threat and on the ICUN red list, meaning that they are vulnerable to extinction. The pygmy three -fingered sloth is Critically Endangered and the maned three- fingered sloth is considered Vulnerable. This is mostly due to the usual suspects: –

·         Farmers killing them because they regard them as pests
·         Because they are hunted for their fur and poached for the illegal wildlife trade.

The curse of ‘cuteness’

Despite their happy, friendly -looking faces, sloths do not make good pets. Even zoos have trouble keeping them alive because they have such a highly specialised diet and it is very unlikely that amateurs will be able to replicate the storied canopies and hot and humid conditions necessary for their survival. See the video below for a glimpse into this ugly trade.

If you want to know what happened next, see the longer video here

Obviously much more needs to be done to protect sloths from poachers and to make sure perpetrators are punished. Since we have little control over what happens in their home state, border controls in recipient countries must remain vigilant and both legislation and law enforcement must be stepped up in order to make the trade less attractive. Awareness and reporting of sightings by the public are important too. You most certainly should not be cuddling them, taking selfies with them or heaven forbid, buying them yourself, because all of these simply encourage their removal from the wild. [This is important for your own safety as well. Sloths carry many parasites including ticks which could potentially be vectors for  new and exotic diseases].

The second most important thing you can do is help to conserve their rainforest habitat as best you can. One way is to avoid rainforest products such as coffee, chocolate and bananas, unless they carry the Rainforest Alliance certified seal. This seal means the products were responsibly sourced and harvested and didn't contribute to deforestation or the destruction of the sloth's natural habitat.

You can also help by funding rainforest tree – planting and restoration. Having to cross open ground puts arboreal sloths at severe risk, but by helping to create connected habitats in Costa Rica you can help to prevent this. It will also benefit other rainforest dependent species and of course the health of the planet. Read more here. The Sloth Conservation Foundation has not yet been rated by Charity Navigator but it is run by a qualified sloth researcher who seems genuinely concerned about the welfare of animals.

Be wary of some others. At least one sanctuary in Costa Rica which originally received glowing international coverage, has been the subject of allegations of exploitation and neglect of the animals it purports to protect,  with animals being kept in cages and only rarely being released into the wild. I certainly wouldn’t donate without independent verification that the right thing is being done and it is not just a money -making enterprise, despite the cute videos.

For more ideas on how to help, click here

Let's make it a happier day for the sloths and make sure they have a future too!

Email ThisBlogThis!Share to TwitterShare to FacebookShare to Pinterest
Labels: Protecting Sloth Habitat, Slothness is not laziness, Stopping poachers, the Downside of being cute