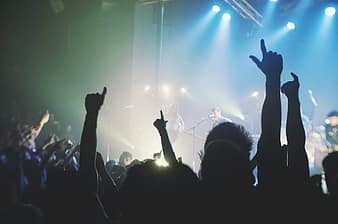 A fatal crowd surge during a performance by US rapper Travis Scott on Friday night has become one of the deadliest live music incidents in recent years. Crowd crushes during the Houston show, which was part of the Astroworld Music Festival, led to eight deaths and dozens of injuries.

The incident is still being investigated, with criminal investigations also underway. How does such catastrophe emerge in a space where people are supposed to be enjoying themselves?

I have been working in the area of crowd safety for several years. My expertise focuses on ways of boosting safety at large events such as Schoolies, outdoor music festivals and sporting tournaments. Based on reports, it seems several factors — compounded by mismanagement — led to an environment that was not conducive to what we call “cooperative crowding”.

In a successfully managed event, organisers will create an atmosphere in which people are relaxed and feel part of a collective. Reports of early pushing and shoving at Scott’s show are a bad sign.

Adding to this, several witnesses reported they were unable to persuade event organisers to take action once the disaster was unfolding. It may be the music was too loud, although such details won’t be known until investigations finish.

According to the New York Times and several other outlets, Scott’s show continued for 40 minutes after city officials reported on the “mass casualty event” — with the show finishing just half an hour earlier than planned.

It’s all about event control

Event managers will often turn the lights up, or play music with a slower tempo, to help tame a rowdy audience. Lighting conditions and music are both important psychosocial considerations.

In fact, there are several ways organisers and performers on stage can attempt to settle a crowd — even among audiences of high-intensity musical acts.

For instance, German heavy-metal band Rammstein can attract intense and sometimes aggressive crowds. When the band played the 2011 Big Day Out festival in Sydney, managers put on a pyrotechnic display and ambient music between sets to helps shift and control the crowd’s mood.

It’s about knowing your audience and the environment they are likely to create. The genre will determine the demographic and the expectation of the crowd’s behaviour. If it’s expected a particular show will attract a high-energy demographic, this needs to be prepared for in advance. Effective crowd control is preemptive, not reactive.

At music festivals, the acts in the lineup can also have a direct influence on the audience’s behaviour. Festival-goers can be persuaded to participate in activities and behaviours at the performer(s) request, abandoning safety restrictions put in place by event management.

As such, performers can create a calming environment through their interaction with the audience and have a positive influence on the crowd.

What measures are in place?

Despite widespread coverage of the Astroworld incident, the reality is that deadly crowd surges are not common. Australia’s most recent crowd-related music festival fatality was during a Limp Bizkit performance, during the Big Day Out event in 2001.

On the whole, event managers put a lot of work into making sure crowds are looked after. Investment in crowd care can come through venue “chill-out spaces”, and granting different levels of access such as ground level versus stalls, or VIP seating. This is because events both in Australia and internationally are heavily legislated.

On-the-ground security guards matter a lot, as they help ensure the crowd is sufficiently spread out and safe. The layout and design of the venue is also crucial, and the space should be able to handle the expected number of attendees.

The 2010 Love Parade disaster in Germany is one example of a chaotic crowd surge in which there were several systemic issues. The events communications system went down and there was only only one entry and exit – a catastrophic situation that culminated in 21 deaths in a crush inside a tunnel.

Closer to home, in 2016 attendees at the Falls Festival had to rush from one stage to another, which resulted in about 80 people being injured, including 20 hospital admissions.

On the other hand, there are plenty of well-organised events that manage to accommodate hundreds of thousands of people, such as the Glastonbury festival.

What can I do in this situation?

As concerts and shows start to resume, you may wonder how you can stay safe in a volatile crowd. The reality is, there is not much someone can do if they find themselves stuck deep in a dense mosh pit which is out of control, and the risk in this scenario is great.

The best way to avoid danger is to stay on the fringes, well away from the most congested sections of the crowd. If you have concert plans, ask yourself: what kind of people might I expect? Will people be drinking? Will it be family-friendly? Common sense will go a long way.

If, despite your planning, you find yourself in a crowd situation where you don’t feel safe, you should immediately report to security if you can. If you’re near the stage, you might also be able to get the performer’s attention. The performer has lot of power and, as several incidents in the past have shown us, they can shut things down until the crowd starts to cooperate.

This article is republished from The Conversation under a Creative Commons license. Read the original article.

[Found the bit about bands being somewhat able to control mood and intensity of the crowd particularly interesting here, however there are other safety issues which must be addressed whenever big crowds are expected to gather. We'll talk a bit more about this next time, along with sharing some other tips for staying safe in a crowd].