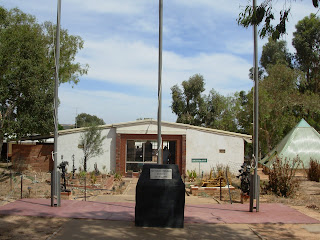 I had my passport inspected and stamped and have just made my first international trip this year, all without even leaving the country. I have been on a pilgrimage to Hutt River Province, about 65 km north of Geralton in Western Australia, which will be 40 years old on the 21st of April, 2010. Over the weekend of the 24th and 25th of April, Hutt River will be a lively place with pipe bands and brass bands, knightings, bush dancing and rides for the children. It will also be Prince Leonard and Princess Shirley’s 63rd wedding anniversary. 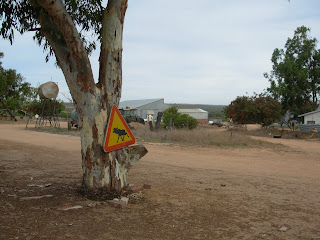 Where's the castle? Typical outback working farm architecture is not what you would expect in a royal kingdom

Apart from the pretty new Chapel, the Government Offices and the souvenir store, Hutt River doesn’t look all that different to any other outback farm - a few run down buildings, a tractor or two, the sound of a generator humming in the background, except for the tour buses bringing in 40,000 visitors a year from all over the world. Obviously its charm lies not so much in its physical appearance, but in the remarkable story that it represents. 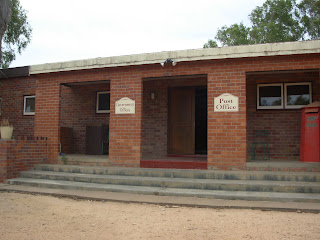 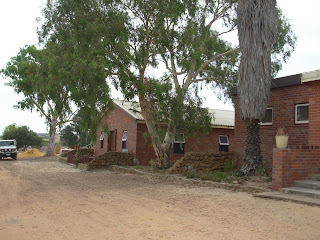 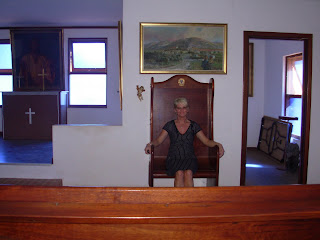 Visitor from Dresden tries out the Royal Pew 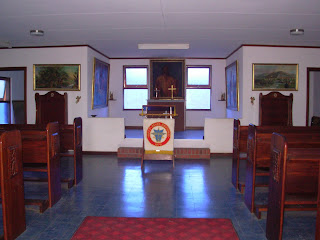 Inside the chapel - the carpet has been salvalged from Buckingham Palace

Australians love their bad boys, their anti -heroes and those who dare to challenge authority. Perhaps it’s because so many of us are descended from rebels of various kinds, or because a good many of our forebears were brought here in chains, but I am sure there is a genetic disposition to cheer the underdog and cock - a -snook at those in charge. We still worship Ned Kelly and Peter Lalor of Eureka Stockade fame of course, but Prince Leonard is a hero from our own time, who not only dared to challenge the Federal Government but actually won.

It was 1969 when an argument about wheat quotas started it all. The Commonwealth Government, which guaranteed wheat prices, fearing a bumper crop, asked the state governments to impose quotas on the amounts to be planted.

Unfortunately, the Western Australian Government did not announce its quotas until October, after all the planting had been done. Leonard Casley, as he was then known, already had a thousand acres under wheat when he was told he could only have one hundred. Nor was there to be any compensation or appeal.

He was not about to take this lying down. As well as being a farmer for twenty years, he was a dashing man about town, owning property in Perth - eighty flats, some shops, and “a couple of mines.” He also wrote on mathematics and physics for NASA.

He took it upon himself to examine the Government records and discovered that the quota arrangements were only a proposed Bill, not yet an Act of Parliament. This was all the ammunition Leonard Casley needed to make an appeal to the Governor of Western Australia. However, this provoked a hostile response from the Western Australian government which then threatened to seize his land.

A search of Crown Law and titles revealed one tiny clause “That the government could not appropriate more than one twentieth of his holdings for any reason.” (I’ll bet they have since removed that clause!) and his claim for seccession was upheld by International law and appeal to the crown, though not, of course, without considerable obstruction from the governments of the day.

The rest, as they say, is history. At first, law professors at prestigious Australian universities were adamant that the bid for seccession would fail, yet three years later, they were inviting Prince Leonard to address law students and lawyers. “It’s never just about the Law,” says Prince Leonard emphatically. “It’s about diplomacy, knowledge and politics.”

History abounds at Hutt River – the tiny souvenir shop is crammed with photos and memorabilia of meetings and greetings, commemorative coins and international honours from France, Spain, Luxembourg and Monaco, yet Prince Leornard remains a humble and modest man. He could make a killing from tourism – a recent TV program in Germany sparked 300,000 hits on the Hutt River website, but he doesn’t charge entry fees and is always happy to oblige when it comes to photo ops. At most he might sell a few stamps or postcards or perhaps one of his beautifully presented commemorative coins but even then you feel it is about pride in showing you something special, rather than trying to sell you something. Princess Shirley tends to shun the limelight and we didn’t really get a chance to talk, though I have heard that there were times when she had grave doubts, especially when letters with the seal of the Governor General began to arrive. 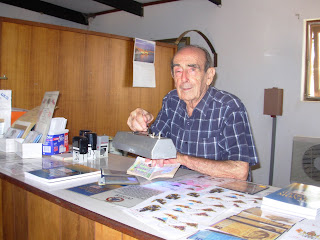 Prince Leonard looks a little tired now. He says the trip to Sydney for the recent book launch about his exploits An Australian Monarch (by William Pitt), almost killed him and he has now turned to more spiritual pursuits – commissioning the paintings for the Chapel and turning his mathematical skills to pondering the formula of life. He has also founded his own college and is writing a book. He is pleased that so many the visitors these days are young people. 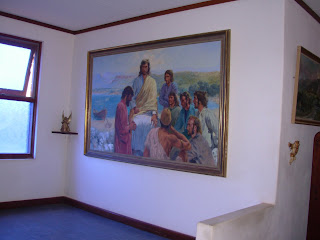 Among many beautiful paintings in the chapel, this one shows Prince Leonard's sons as seekers of truth on the Sea of Gallilee

Hutt River will live on in many ways, not the least through his children -four sons, two daughters, and 23 grandchildren and the two great grandchildren rumoured to be on the way. I 'm delighted to have met and been able to chat to a living legend and a truly remarkable character. 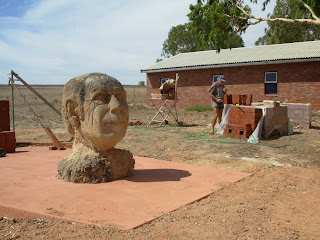