The Trees that Outlived a Town 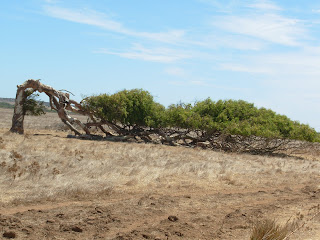 The Leaning Trees of Greenough have a tale to tell. They have outlived the town that grew up around them 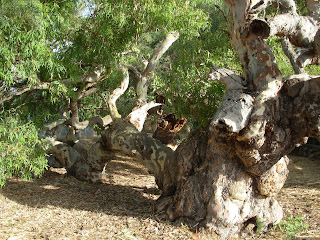 This river redgum at the museum is over 800 years old. They grow this way because of the prevailing south westerly wind 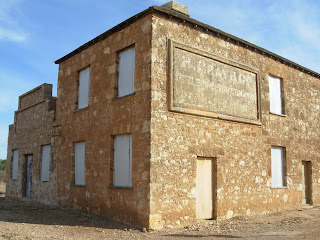 One of many scattered abandoned buildings


They challenge me, these buildings that stand so proudly and defiantly with their sightless windows. They shout at me that some great tragedy has taken place here and that I should find out what it was.

What happened here I wonder? Was it a lack of water as in Coolgardie? Was it a natural disaster? Or a human failing? Was it fire? Pestilence or Drought? Did it happen all at once? Or was it a progressive insidious thing, a slow erosion, a loss of faith in the future, where people packed their things and left one by one? Why do these buildings stand so solid and yet so empty? Do they have some moral to teach us?

I am in what is left of Greenough (pronounced Grenuff) 24 kilometres south of Geralton. It started well enough and at one stage boasted a thousand souls. The explorer, Sir George Grey predicted that it would become the granary of Western Australia when he called by in 1839. Augustus Gregory coming in 1851 subdivided its flat lands into 20 and 30 acre lots to attract English settlers and soon after a thriving wheat growing district developed. 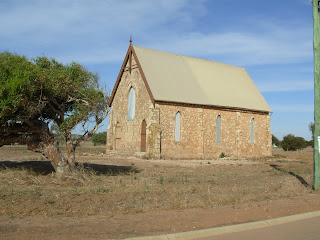 The Wesleyan Church, built by Convict labour in 1871 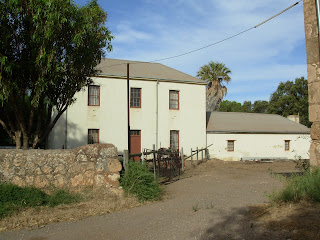 The Greenough Pioneer Museum - one of the few inhabited buildings

My first port of call is the Pioneer Museum, one of the few inhabited buildings in town and one of the more substantial ones. The building dates from 1862 and was home to the Maley family. There the proprietors tell me that the blocks were simply too small to provide a living and certainly no cushion against a bad season or other disasters.

According to Wikipaedia (http://en.wikipedia.org/wiki/Greenough_Western Australia, there were plenty of those, “…starting with a major cyclone in 1872 then major flooding in 1888” which covered fifty square miles and was five metres deep in places. This was followed by the discovery of gold which led to the gradual abandonment of the town. “By the 1900 most of the settlers had left the area with many small farmlets converted to grazing.”

Another theory put forward in the the National Trust's Visitor’s Centre on the main highway, is that the advent of farm machinery which could not be operated economically on small farms, led to a reduction in the number of workers needed. I have no proof, but this is more likely to have been an effect, rather than a cause, as men rushed off to the goldfields. Gold was first discovered in Western Australia at Hall’s Creek in 1885, and then in Coolgardie in 1893 which rapidly became the third largest town in Western Australia. International Harvester did not start producing farm machinery in Australia until 1902 and is thus unlikely to have been a major factor until after that date. The flow –on from the International Harvester decision of 1907 – that all men (sic) should be entitled to a living wage, would certainly have added to farm costs and spelt the death knell for any marginal properties that still employed labour. 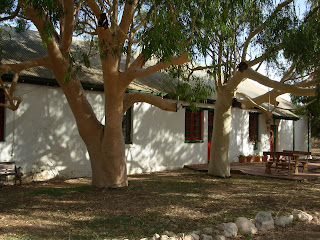 Part of the Hampton Arms, no longer on the main highway, but still going

What is the critical mass for a town? When does the last shopkeeper decide to board up his shop or a family decide to leave their home? When does the government decide to shut a school or stop services such as the Post Office or the Police Station?

Wikipedia says that the wheat industry was not very successful until the railways made transporting it to ports economical. That began in 1899 with the opening up of the Great Southern Railway. Greenough was not on the railway line. Once the wealth from the goldfields had gone, early in the twentieth century, Western Australia had to depend solely on wheat and wool and was plunged into dire economic straits when prices fell in the 20s and 30s. Not until migrants arrived in large numbers after World War II did it begin to recover (Wikipedia, History of Western Australia).

That was too late for Greenough. During the Great Depression, many of it’s fine buildings -including the second best hotel in Western Australia (which even had its own ballroom), were ground up to be used as road gravel, leaving only a few randomly spaced survivors – churches mostly, although the pub, The Hampton Arms, a quaint place offering teas, books and antiques, survives on a back road, cut off from the mainstream of traffic between Perth and Geralton.

Like the trees and despite the vicissitudes of life, Greenough struggles on. If you are passing do call in at the museum, the pub, the olive farm and the National Trust’s historical centre while you can. 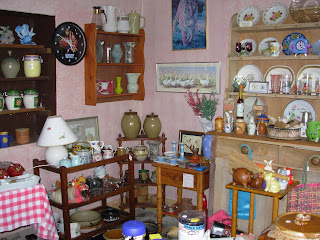 Inside the Hampton Arms there are antique shops, old books and a little cafe