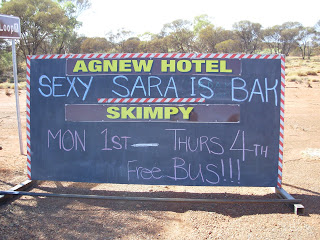 This sign just outside Leinster attests to the continued popularity of the Agnew Hotel. A 'skimpy' by the way, is an underdressed barmaid.

I have seen so many ghost towns this last week that the mystery is no longer why so many places disappear, but why in fact, any survive. 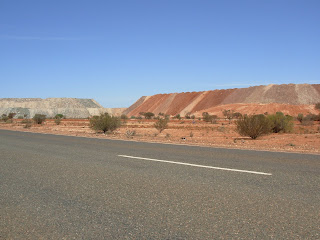 All that glitters is likely to be a beer can 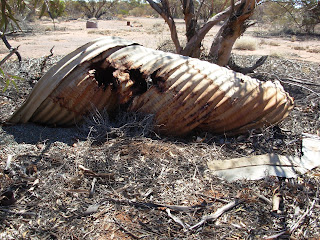 All that remains of Comet Vale
In country only a geologist could love, (or maybe the odd artist -see next post), the rollcall of the dead includes Paynesville, Goanna Flat, Niagara, Comet Vale, Goongarrie, Siberia, and many more that I didn’t visit such as Linden, Bindah, Mt. Morgans, Lancefield, Beria, Murrin Murrin, Eulaminna, Yundamindra, Yerilla, Porphyry, Mt. Ida, Riverina, Mulline, Lennonville to name a few.

Mostly relics of the 1890s gold rushes, there isn’t usually a lot to see.Niagara and Comet Vale are typical - just a clearing with bits of broken crockery, a few rusting sheets of tin, lots of broken bottles with the glass turning blue or purple and of course a gigantic mullock heap or three.

While the township of Niagara has disappeared, the dam built nearby to service the railway and the town of Menzies still stands in a most spectacular setting. Though water failed to fill the dam, ground water in abundance was found near the town, and the dam became redundant. The road is terrible and the warnings are dire, but it is a lovely place to camp.

At Siberia there are about a dozen graves – one of them a child’s, in a shallow semi- circle. The only sound is the wind rushing through the trees. At Goongarrie (1893 – 1903), once a busy coaching stop between Coolgardie and Menzies until the coming of the railway, there are still a few stone railway cottages.

Then there are the ‘living’ ghost towns. That is, they at least have a working pub and or mine. These include Agnew, Broad Arrow, Ora Banda and Kookyne. 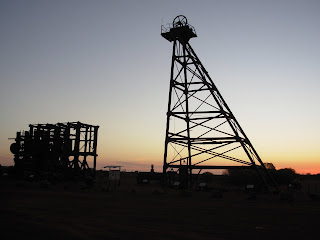 Head frame at Agnew where the mine is still going 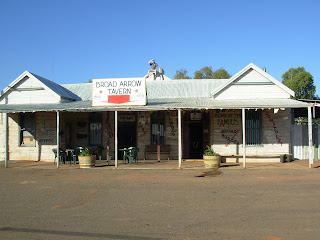 Broad Arrow's Tin Pub- much favoured by motor bike riders. Not a surface anywhere that doesn't have graffiti 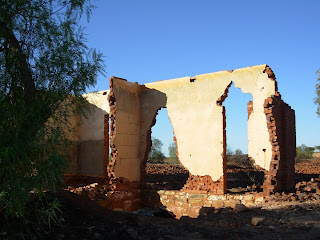 Some of the impressive ruins at Kookyne - a living ghost town

As well as a working pub and impressive ruins, Kookyne is nicely signposted with photographs and stories to give you a good idea of just how big and bustling this town was and about what life was like in its heyday. There were several mines working around Kookyne but it was rising water in the Cosmopolitan Mine which led to its closure in 1911 and the subsequent demise of the town.

Gwalia, south -west of Leonora, is also a fascinating place, less because of it’s grand buildings such as the State Hotel or the house on the hill built by Herbert Hoover (then the mine manager, but who went on to become President of the United States), but because of the tiny corrugated iron cottages that the miners lived in. Vernacular architecture is usually ephemeral and consigned to the dustbin of history as not worthy of preservation, yet here it is possible to see how ordinary people lived. It is a credit to the people of Leonora that they have found an ingenious way to preserve them. 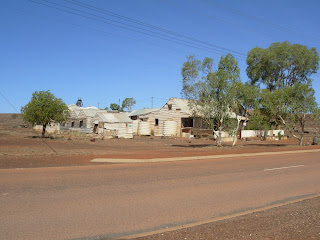 Patroni's Guest house at Gwalia. Though the mine has reopened today's miners prefer the comfort of Leonora or fly in and out 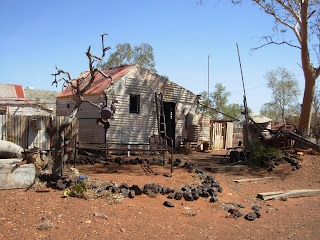 One of several Miner's Cottages at Gwalia 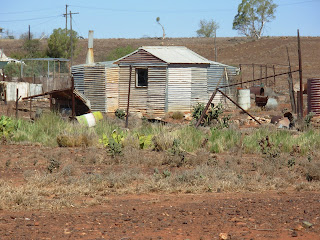 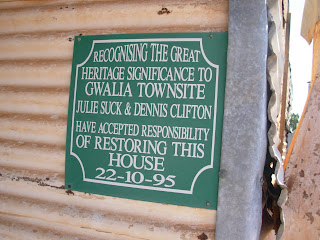 In 1995 these cottages were auctioned off to the people of Leonora to ensure their survival. Otherwise, very little of ordinary people's lives has survived on the goldfields. 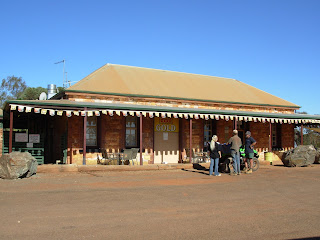 The fine brick pub at Ora Banda (population six) has had a chequered history and has stories of murder and mayhem to tell. It is very popular with tourists and the mine there is also being reworked. 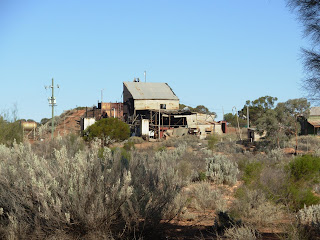 Although the mines have reopened in Agnew, Gwalia, Ora Banda and Davyhurst (another long abandoned town) most of the miners prefer to live with modern comforts in Leinster, Leonora or Menzies and/or to fly in and out, so it is unlikely that these towns will revert to their former glory.
The Survivors

Since the advent of efficient personal transportation, the survivors include Mt. Magnet, Sandstone, Leonora and Menzies. Though not as big as they once were, they have charming old buildings which endear them to tourists and provide services to the mining industry and travellers. 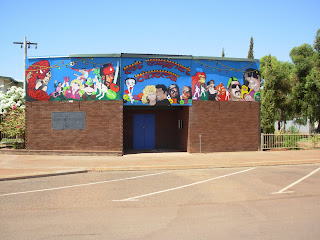 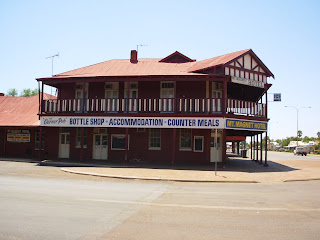 One of three big hotels in Mt. Magnet
Leinster is a modern company town which only dates from the 1970s. Long regarded as a model for the mining industry it offers many amenities and sporting facilities, not usually found in the older towns. I suppose if I had young a family a green place with plenty of trees, a gym and a pool, good shopping, parks and childcare would also appeal. Loved the free showers! 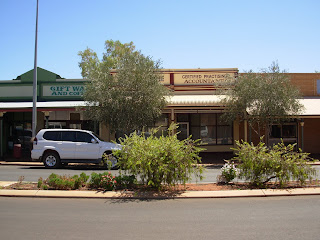 Pleasant streetscape in Leonora attracts visitors and services to the mining industry. There is excellent tourist information at the library

Westonia, not far from Northam is another surprise. Though much has gone, as evidenced by the attractive murals and mock buildings, it too has had a recent revival and harbours a modern telecentre, a conference centre and elaborate sports facilities away from the main street. Mercifully it is also on a sealed road, not far from the main highway.*

Along the highway, mines continue to come and go, much as the towns did a hundred years earlier, leaving little in their wake other than the ubiquitous tailings dumps. A new find, a change in technology, a rise in the price of metals or improved infrastructure such as better roads or adequate water, may change their fortunes overnight. 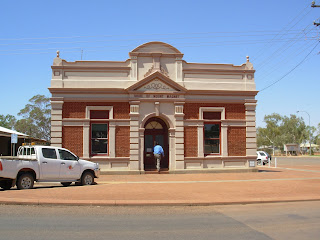 Shire Office at Mount Magnet. Many of the buildings here, including one of the big hotels, were originally made of mud brick 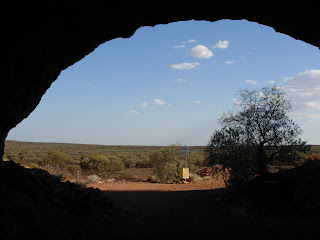 An enterprising brewer near Sandstone set up his ingenious brewery inside one of the rocky outcrops. He was not the only one to realise that there was more gold in servicing the mining industry than could be found by digging. 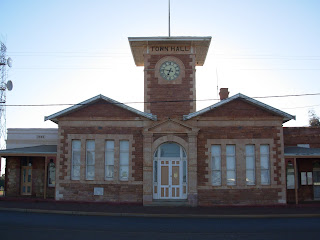 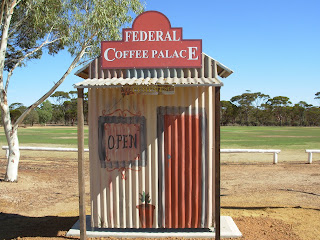 "Westonia -more than just a facade" says the sign on the highway.It has also had more than one revival.

Except for Westonia, most of these places are part of 965 Kilometre Golden Quest Trail which starts at Kalgoorlie or Coolgardie and their stories can be found on various plaques, along with a little about the local flora, fauna and geology.

Another interesting route is the Miner’s Pathway that starts at Payne’s Find and runs through Mt. Magnet to Meekathara and across to Sandstone. 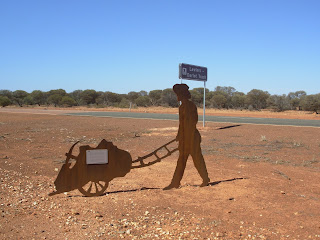 On the Miner's Pathway near the Darlot-Lawler Track. Those who died along the way were often considered 'the lucky ones' compared to those who made it to the gold fields.


Kalgoorlie has been the big winner in all this. I suspect that all those who made their fortune must have moved here. True, the red light district may no longer be as busy, but most of its elaborate pubs are still going. There are lots of fantastic buildings in Hannan Street and the “Golden Mile” shows no sign of slowing down either. Nor has Kalgoorlie forgotten its benefactors – Paddy Hannan, who found the gold and C.Y. O’ Connor who designed the weir at Mundaring and the pipeline to pump water uphill five hundred and fifty kilometres, are commemorated in the main street.That's as far as from Scotland to London or almost the length of the Rhine for those of you who can't imagine what a feat that was. 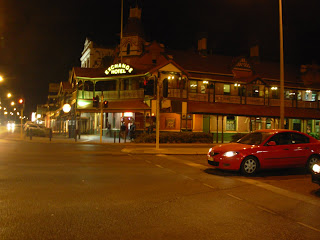 Saturday night in Kalgoorlie -Undisputed Queen of the Golden West 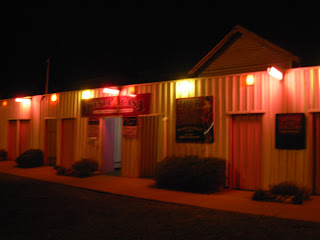 Questa Casa, over one hundred years old and regarded as the oldest brothel in Australia, doesn't seem to be doing as much business these days, though its daytime tours are popular with visitors. 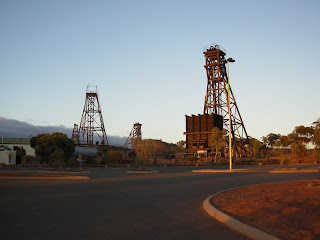 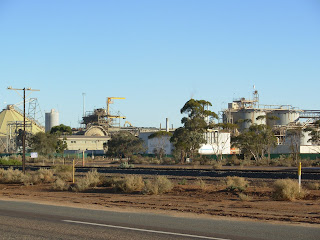 And the wheels keep turning.... The cycle on the goldfields goes on.

1. There are lots of large kangaroos on this route and four -trailer road trains carrying heavy equipment and explosives. You may also encounter the occasional large wedge -tailed eagle, stray goats and free ranging Brahmin cattle and the whole area is subject to extensive flooding, though looking at it today, that’s hard to believe.

2. Oh yes, and don’t believe locals when they tell you that “No the road isn’t sealed, but it’s a good dirt road,” or that “It’s just a little way off the highway.” They all drive big fat four wheel drives or utes that are built like tanks and to them a hundred kilometres is neither here nor there in this vast country. Take plenty of water and make sure you have enough fuel to get back, even if it does cost $1.70 a litre.

3. For safety reasons, stay away from any active mining operations and watch out for abandoned mine shafts at deserted ones.

4. You need a Miner’s Right before you go prospecting on Crown Land. To prospect on Pastoral Leases you need to notify the pastoralist.