Places in the Heart - Mongolia Revisited 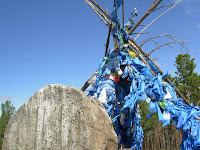 Its hard to explain the allure of Mongolia to those who haven't been there. Sometimes it's even a mystery to those who have. The landscape can be monotonous, even desolate and its largest city is lately remembered more for the efficiency of its pickpockets and the zealousness of its immigration officials than for the splendour of its architecture or the charm of its streetscapes.Yet those who have been here often come back again and again. 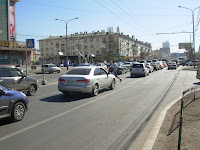 The fleet is newer 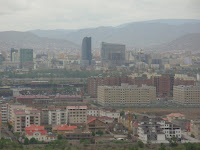 For those coming from densely packed European cities, the USA and Japan, those wide open spaces and endless unfenced horizons are impossible to forget. Nor will I forget Katje's face as she tells me about her time in the countryside helping poor herders with their animals. Katje is German. Her face is fresh and tanned and her blue eyes shine ."I have never been so dirty in my life!" she says proudly. 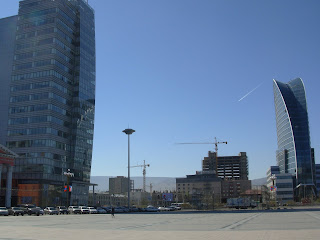 There is still that exotic combination of the ancient and modern 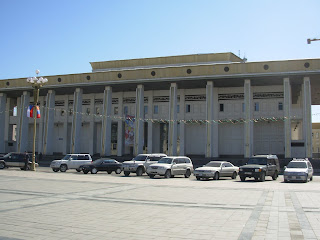 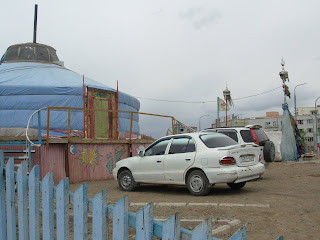 The Temple of Heavenly Sophistication is in a most unlikely setting

Tourist numbers are up this year. Many are international volunteers combining an element of adventure travel with making some kind of contribution to the country. Though there do seem to be more people sleeping on the street and street crime seems to have increased (Mongolia was also hard hit by the global recession as well as the ZUD- see previous post') there are far fewer child beggars than four years ago, presumably thanks to the efforts of aid agencies and such volunteers.

It was not uncommon to have people coming into the hostel bearded and smelling like camels after three weeks in the country or a few days of trekking or travelling by train. Who would have thought it so liberating! And the thrill of that first hot shower - assuming the hostel had hot water that day -and the subsequent transformation were wonders to behold.
It does make you appreciate things we normally take for granted. Many assumptions are challenged every day. Like not being allowed to flush toilet paper down the toilet, or finding that the only facilities at a country hotel consist of a long drop two doors away with two planks to stand on or having to pee by the roadside with all the other passengers with not even a bush or a tree to hide behind. Privacy is simply not a concept in Mongolia. Up to ten of us sleep in an ordinary -sized bedroom at the hostel.
Nor does anyone wear seatbelts or helmets and it's still OK to smoke in restaurants. On the other hand the rules are strict about not wearing shoes inside and attention to cleanliness of the interior of the house is meticulous- even the carpets are washed by hand every day -and the hospitality is generous. 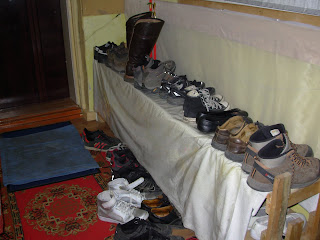 The hostels are busy this summer.

Sometimes it's about meeting new challenges and overcoming your own inhibitions. Helle from Denmark, mature and refined, shows me photos of breakfast in the ger camp where she worked- a stewpot with animal heads and entrails. "Absolutely nothing is wasted" she says, though she was obviously shocked at first. Vegetarians don't stand a chance.

Mongolia is so immediate that it forces you to leave the past behind and forget yourself for a while.
I have a theory that it evokes ancient folk memories of former lives as hunters and herders - a harsher but simpler life, less dependent on the mood swings of the global economy and much more tangible. You measure your progress not by possessions, but by the health of the herd, the state of the grass. If things aren't looking good, you move on. But maybe I am romanticising a life that is basically hard, often short and probably not very stimulating. Otherwise why would one third of the population choose to live in the city? 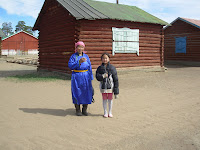 A Lifestyle under Threat?
Chaotic as it is, Ulaan Bataar stands at the crossroads between the East and the West, the North and the South. You meet people from all over the world, heading to Russia, to Beijing, to Korea, Japan or South East Asia, or going back 'home' wherever that might be. There's a mixture of ancient shamanistic and Buddhist beliefs beside modern shrines dedicated to the almighty Dollar or maybe the Yuan. Despite frustrations like 'Mongolian Time' -very like Island Time in Vanuatu -and disappointments like having my wallet stolen and being fined- The unexpected kindness of people in the hostel as well as complete strangers still endears the place to me.

For example, when I was returning from immigration in the rain, a very kind man offered me me a lift. Since every car is potentially a taxi in Mongolia, I declined at first, as I only had the bus fare left after just being fined around $250. He insisted on taking me anyway- it's about 10 Kilometres from town - and tried to give me money as well inviting me to stay at his home.

Bulgan and her family came into my life when I was asking for directions to the railway booking office. She insisted on taking me herself and we enjoyed a couple of wonderful days together along with some great meals provided by her brother. 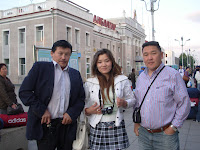 Bulgan, her brother Arunbold and a friend take me to the station

When Saggi the hostel manager/ Mother, found out that I had had my wallet stolen, she insisted on not charging me for the next three days. On the night before I left she also put on a fabulous farewell dinner for all the hostellers and gave me some lovely slippers to take with me. My fellow hostellers were really kind too, sharing food and drink as well as being great company. Many of them will remain friends long after we leave Mongolia. 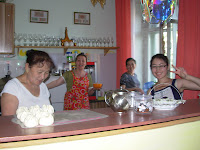 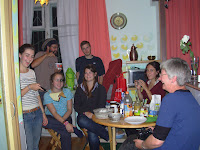 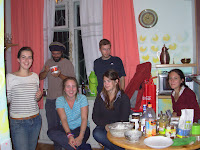 Friends at the Hostel partaking of a little light refreshment 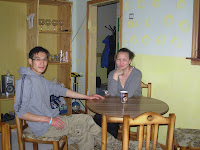 Many thanks Pascal and Saggi!
It was lovely meeting you all!