This says "Russia" in Russian. Reading Russian is a bit like cracking a secret code.
I was really excited when I first worked out that CTON meant STOP. I am glad I didn't drive. It would have taken me so long to decipher the road signs that I would have ended up in Vladivostock. There weren't many roads in Siberia though. Trains are the main form of transport. I'll tell you about them in the next couple of posts. Also about some of the great places I visited and the people I met in a journey of over 10,000 kilometres.

I had always wondered about . For most of my life it was shown as a large blank space in the Philips World Atlas. Now that is finally letting in independent travellers – even shoestring ones like me, I thought I should have a look around and give you an idea of what it is like. I can tell you now that it has 145 million people, at least twelve different ethnic groups and eleven time zones!

I’d always wanted to travel by Trans Siberian Rail too and thought would be a nice cool place to spend a Northern summer. It wasn' t! Russia had its hottest summer ever recorded and it was 35oC from the moment I crossed the border until I left , two and a half months later. In fact, severe fires were still burning in Volvograd only a month ago. 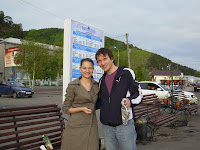 A great welcome to Siberia

My first stop after Ulaan Bataar was in Irkutkst,"The Paris of the East" where I was met by Max from the Hospitality Club. Just as well as he was one of the few people who spoke English. Even though it was very late in the day, he and his sister immediately whisked me off to Lake Baikal for a taste of smoked Olmi, a smaller relative of the salmon.
Snow still lay on the far mountains and it looked very picturesque and serene. It is the deepest Lake in the world and contains about one fifth of the world's fresh water (Lonely Planet). On the way Max told stories about the Lake. For instance, how the Angara River, the daughter of Lake Baikal, had fallen in love with the mighty Yenisey and had run away to join him. Or the story about how the rock in the middle of the lake was used to to test prospective brides. If they could stay on it overnight, they were thought to make good wives. If not, they were considered likely to stray and that the marriage would be doomed. 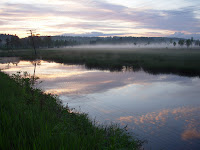 Evening near Lake Baikal
Max had to work the next day so he left girlfriend Natasha to show me around town. Although Irkutsk has quite a lot of industry and plenty of soviet- style apartments, the city centre and the area around the river have retained their charm with many older wooden houses, golden domed churches, grand merchant houses and public buildings. It was a perfect day, with lilacs in bloom everywhere and lovers sprawled on the grass in the park or walking hand in hand by the river. Russians are a romantic lot, much more demonstrative in public than most Westerners.

There were yummy bakeries and coffee shops as well. The coffee shop we visited was also a flower shop and the iced coffees were delicious. The next day was just as beautiful, so we fed squirrels in a nature reserve near the city and wandered along by the river. All very idyllic until we were terrorised by a large and savage dog that was thankfully attached to one of the houses. 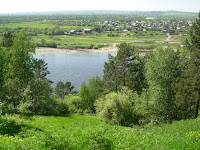 River Views
The day after wasn't so great. The weather was nice enough- too hot in fact, but we spent most of it and half the next day complying with Russia's fairly complex registration requirements which were to cause problems from time to time. Some hotels wouldn't do it all, preferring to avoid foreigners altogether, rather than deal with the mind -boggling paperwork. Others simply charged more or insisted on a very expensive overnight fee. I certainly vowed I wouldn't put friends through it again - queueing first in one department then another, then at the photocopy shop. After that came a stop at the post office to pay the fee, then back again with the receipt. Even then it wasn't over. Max had to take time off work the next day to prove his identity as the householder. The only option was to keep moving and to stay no more than three days.(This applies to private householders - it is a bit easier in hotels). 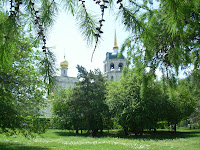 Fine buildings, lots of shade trees, many of them lilacs, make Irkutsk the 'Paris of the East' and a lovely place to be in Spring.Bureaucracy aside, Russians are romantics! 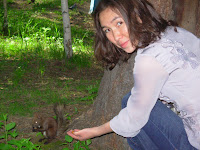 Not wishing to make an even bigger nuisance of myself, I took a trip to Olkon Island in the middle of Lake Baikal.

It is sacred to both the Buddhists and the traditional shamanistic worshippers. The colourful strips of cloth on trees and stumps reminded me of Mongolia. This is not surprising given that the Buriyati who live in this area are descended from the Mongols. Rather than join Chinggis Khaan in his battles, they fled to the forests of Siberia where they still live a simple life based mainly on raising cows which supply almost all their needs, even alcohol, though the recipe is a family secret!. 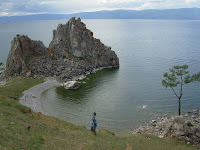 Place of Magic and Mystery
- Olkon Island
At one of the Buriyati villages there was a bit of a demonstration of the traditional lifestyle including a meal of homemade bread and butter served with sweet cottage cheese, herbal tea and something like ghee. Afterwards young boys demonstrated the local form of wrestling and their big sister recited a poem about Lake Baikal. Later still, the two Russian visitors and I were roped into a traditional dance which was very similar to the Crane Dance performed by the Ainu on Hokkaido in Japan. I regret to say that my performance was not exactly noteworthy. 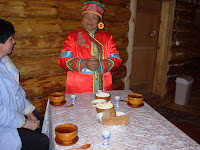 Traditional Food
Spent that night in Nikita's, a hostel owned by a former Table Tennis Champ. It is made up of all different little buildings that collectively have a lot of charm. Would have liked to haved stayed longer, but it was at this point that I discovered that my Lonely Planet was four years out of date and many prices had almost doubled. 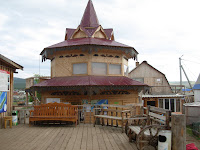 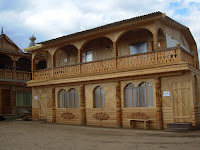 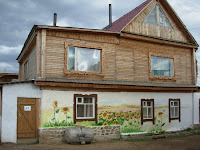 Home for one night only

Did enjoy my midnight banya though and the breakfast of millet porridge.
All around a building boom was in progress so I took lots of pictures of the traditional wooden houses seguing into the landscape because I fear that the next time I come, they will all have disappeared......... 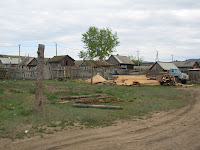 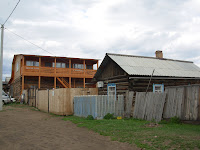 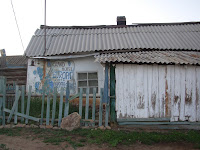 Then, after a long trip back to Irkutsk and a lot of help from Natasha and also her long -suffering Mum, Vera, I finally caught the night train to Krasnoyarsk.
Thanks for all your help team!

PS: Sorry about all the messed up fonts. Started this on several different computers and am now totally lost.
at June 30, 2010