San Pedro de Atacama has to be one of my favourite small towns, not the least because there's nothing for hundreds of miles, except for volcanoes that is - twenty - eight to be exact, although only one is active. The town itself is a charming mix of simple adobe structures and cobbled streets.  Once a way station for cattle drives to the coast, tourism is now the main reason for its existence and they flock here in droves, not always to the delight of the locals.


For the most part though, Chileans are warm and friendly. I got more hugs in my month here than I'd had in the last seven years. Yes, it's expensive and they do take your money, but at least they do it with a smile.

During the day it was warm enough for the men to take their shirts off and most of my fellow hostellers wore shorts, but as soon as the sun set it was very cold. The hostel solved this problem by having fire pits in the garden on most nights so that people could enjoy being outside under the stars. It is an excellent place for stargazing.

A number of tours begin here including those going to the salt lakes. My first was to the Valle de La Luna here (there's one in Argentina too, as well as the one in La Paz). The stark landscape was created by salt, most of which is composed of lithium - the largest deposit in the world. Some say that the reason the town is so laid back is because of the lithium in the water. The valley covers a huge area and is full of bizarre rock formations, caverns and a few stalactites formed in same way as in limestone. Occasionally you can hear the rocks crack and there will be a minor landslip as salt  and moisture find fissures in the rock and expand and contract with the dramatic temperature changes between day and night. If you want to get a better idea, click here.

Once a ceremonial site, its dunes are now popular with sand boarders. It is also said that Pink Floyd once performed "Dark side of The Moon" here.

My second excursion was to the El Tatio Geyser field about 90 kilometres from San Pedro. Because the geysers are at their best early in the morning, this necessitated another chilly 4 a.m. start. They were also  4,300m above sea level so we were advised to wear very warm clothing and not to partake of alcohol, meat or tobacco the night before. This was a shame since the hostel was having a barbecue that night with lots of free drinks.
This is the third largest geothermal field in the world and most certainly the highest. Everywhere geysers hissed, gurgled and bubbled. Bigger ones sent clouds of steam into the skies while smaller ones burped and chuckled. You can hear a bit of it here:


I couldn't press the shutter on my camera with the ski gloves on, so I briefly took them off. My hands practically snap froze. Now I couldn't press the shutter because my fingers were completely numb. After retreating to the mini van and its heater, it still took at least ten minutes before I had any feeling in my hands and the pain was unbearable. Meanwhile people were stripping off for a dip in the thermal baths. I couldn't bear the thought of taking anything off at all. 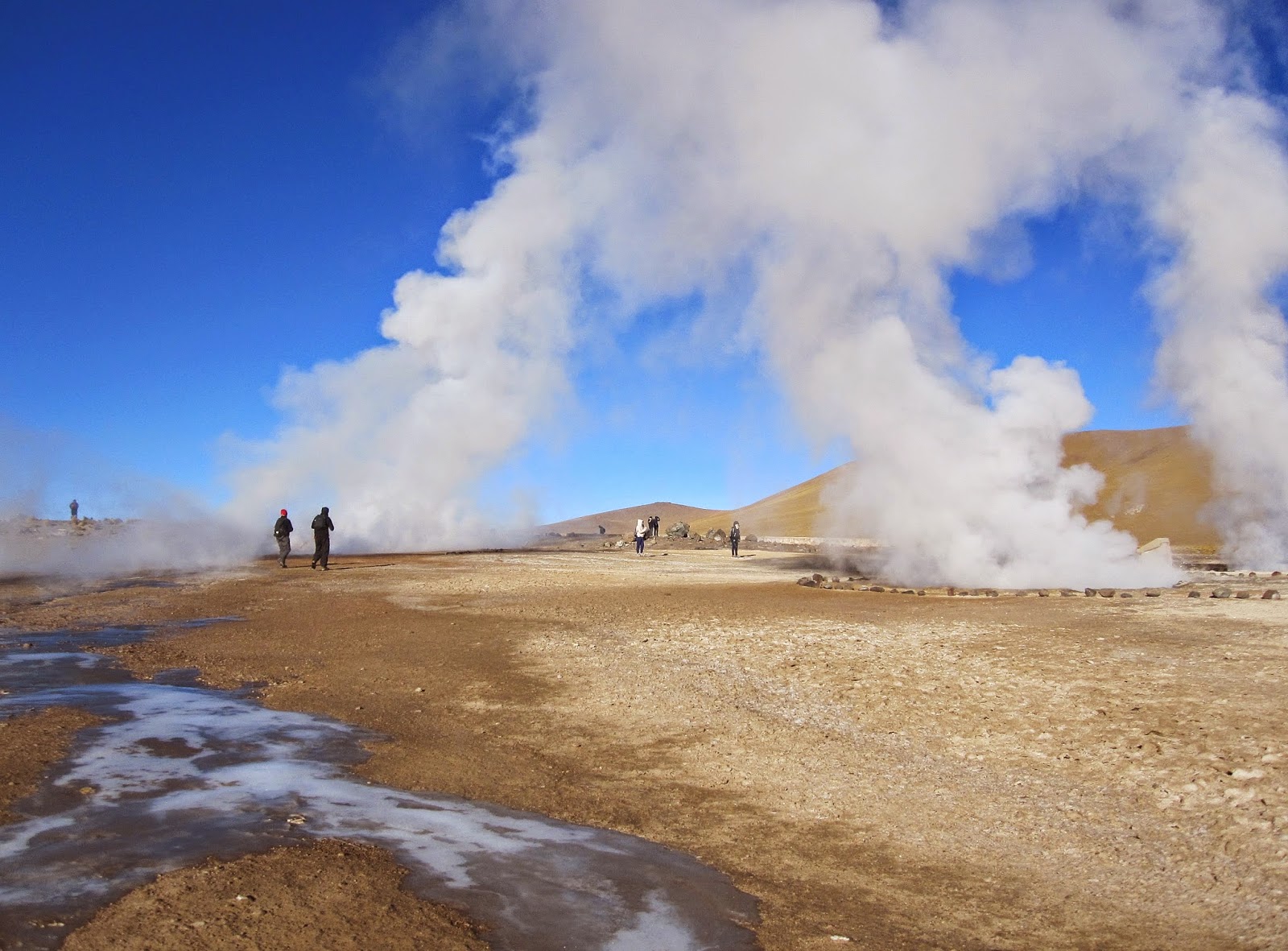 Unfortunately there is now interest in starting a geothermal power station here which may threaten the tourism value of the field. The guide said that just the exploratory drilling has caused the geysers to drop in height.  While the region may not seem very hospitable to wildlife, we did see one of the small local foxes. I think it was the Viscacha, a relative of the chinchilla. These do not run away when spotted but obligingly sit very still. There were also vicunas (other relatives of the Alpaca) on the grassier slopes further down. These were almost extinct thirty years ago, but a vigorous protection program on the part of the Chilean government has enabled them to recover and thrive.
.
We stopped briefly at the remains of ancient stone shelters used by nomadic herders in times past and  also at a frozen lake, - a bird sanctuary, where the birds waited expectantly, hoping for the ice to thaw, so that they could eat. We did our best to break the ice by throwing stones but with little success. We then stopped at the small village of Machuca which once lived from mining sulphur, and had been abandoned but now provides lunch to tourists. Although the smell of skewers of alpaca being grilled was tempting I had a cheese empanada which the guide recommended. It was freshly made and had the crispest lightest pastry I had tasted either before or after.
Walking up the hill to the little church, I noticed that each of the small neat houses had solar panels on its roof. It was sort of Stone Age meets the future without the Industrial Age, power poles and centralised power stations in between.