Chile II - La Serena and the Valley of Delight


First let me say Chile is huge - not wide mind you, it's only 350 kilometres across its widest part and 4,300 km long according to wiki, sandwiched as it is between the Andes and the Pacific Ocean, and you have to cover a lot of miles before there is much change in the scenery. I had hoped to break this journey, but the main industry here is mining, including the biggest copper mine in the world, so accommodation was at a premium and I ended up having to go straight through to La Serena, about 1156 kilometres away and twenty -one long hours by bus. Most of the way the landscape looked like the picture above, but as we came down a long pass towards the coast the vegetation began to change to scrub and cacti.  In summer La Serena is a very busy seaside town, but at this time of year it was rather quiet.


I wasn't all that excited about the the hostel I had chosen. When I arrived the owner charged me the equivalent of $120, instead of twelve. As I'd been travelling all night and wasn't used to dealing in currency with zillions of zeros at the end, I didn't even notice until later when I went to pay for something else.  Of course he returned the money when I complained and he also told me where to find cheap local food, but I'm sure he wouldn't have if I hadn't mentioned it. My room was  freezing too because it only had a screen instead of glass in the window and this opened onto the kitchen below. I shouldn't complain. Many of the hostels I stayed in especially in Bolivia, had no ventilation at all. Mostly though, I missed the warmth and friendliness of San Pedro.
After spending some time at the local market which had a greater variety of food than I had seen for ages and buying lots of dried fruit and nuts, I spent a day meandering through the nearby Elqui Valley on the local buses. The road was called Via D' Estrella -The Way of Stars because there are several observatories in this area. Clear skies, the absence of pollution - light or otherwise, and three hundred days of sunshine a year, make it an excellent place to study the stars. They also have a Valley of the Moon here, but I missed that as well. The rest of the valley was greener and quite remarkable with picturesque towns and hundreds of vineyards growing right to the edges of the barren slopes. It was a shame the grape vines were not in leaf or it would have been even more striking.

This is where most of Chile's Pisco (grape brandy) is grown and made. There are several distilleries in the area and many of them have tastings and tours, although none seemed to be doing them on the day I was there. This is the off season. To make the drink, sugar, egg -white and lime are added. You can also use other fruit such as passionfruit.
The little towns along the way were  attractive too.  At the place where I had to change buses (it may have been Vicuna, since I can't find any others on the Google map), there was a lovely plaza with street stalls and sculptures and very unusual architecture. It seemed to me that people were very creative here.

[* note: they are much sleeker and healthier than those in Bolivia]

Vicuna was Gabriela Mistral's birthplace, although there is a museum to her memory in the house where she lived at Monte Grande, just before Pisco Elqui a little further on. She was a poet, diplomat and educator who won the Nobel Prize for Literature in 1945, the first Latin American to do so and she is still their only female Laureate. When she died in 1957, three days of national mourning were declared and hundreds of thousands of people came to pay their respects. She is still fondly remembered today. A giant statue of her stands in the street in Monte Grande where she is buried (although she died in the U.S.A.) and the school there is named after her as is the Cultural Centre in Santiago and many other places. I specially looked her up because I wondered what all the fuss was about. For more about her life and poetry, click on the link below. South Americans do value their poets and writers. Perhaps these words inscribed on her tomb and taken from her poetry explain why:


“What the soul is to the body, so is the artist to his people,”

Pisco Elqui at the end of the road was also a pleasant surprise. There was a neat church behind a shaded plaza and there were some nice looking restaurants, but what I found endearing was the way the modest little houses had been decorated with paint, bits of mirror and a few plants which gave the place a certain character.The setting with those mountains directly behind them made it all look rather surreal. 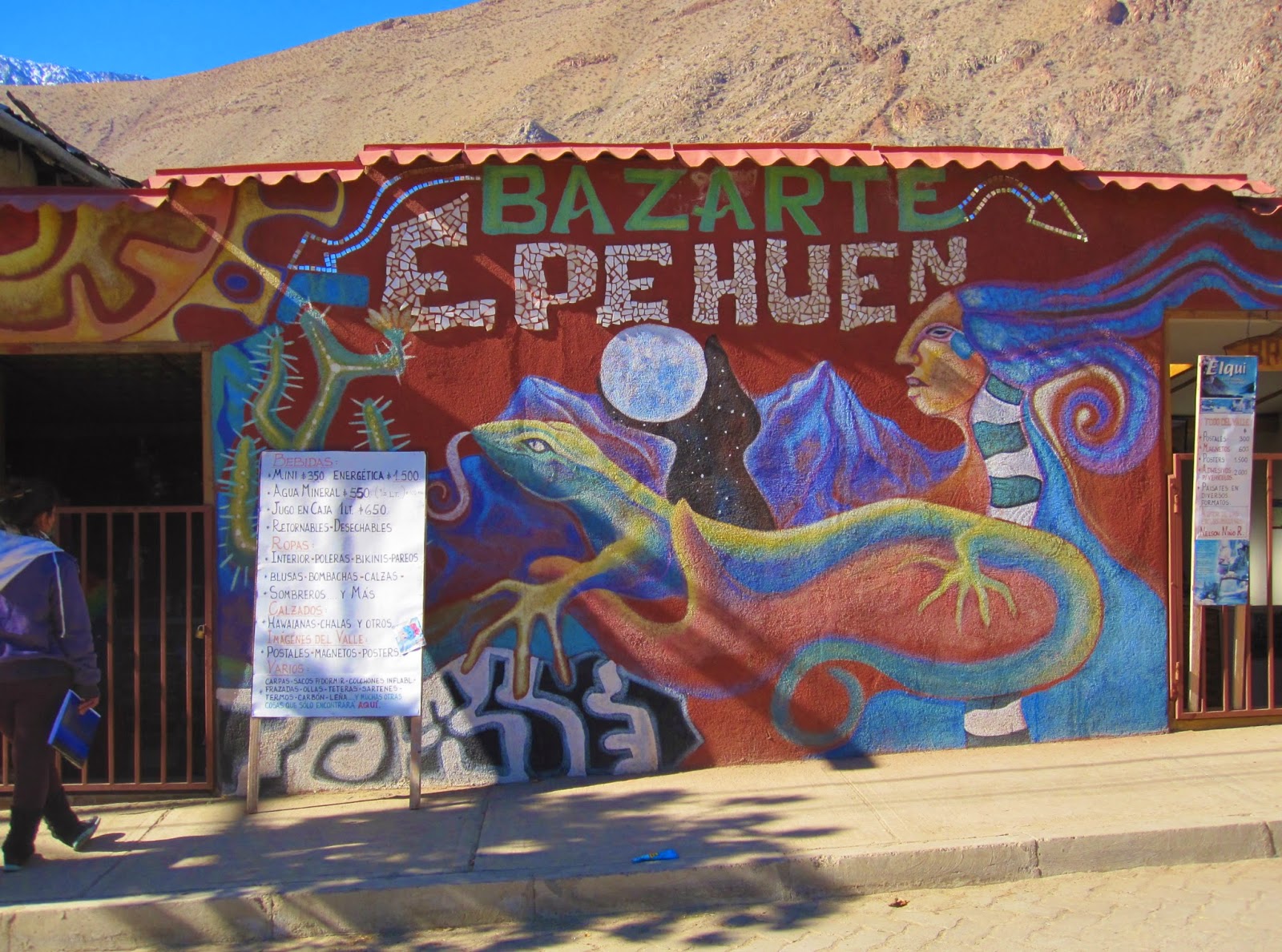 The Elqui Valley is also said to be a spiritual place. In the sixties New Agers flocked to the valley, believing it to be the new magnetic centre of the Earth and several communes were established. At least one of these still exists and indeed, according to one report, when NASA began studying the earth using satellites, the area was found to have high magnetic readings. It was also associated with spiritual practises among earlier cultures. I thought it would be an interesting place to have a Tarot reading. Unfortunately, while a number of alternative therapies such as Reiki and Yoga were advertised, along with herbal products and Tarot readers, I couldn't find a Tarot reader who spoke English. In fact, I had great difficulty finding one at all, but in this case the journey was more important than the destination. It was such a beautiful day and perhaps I did absorb some of that cosmic energy after all.