I was rather dreading a city of six million people but it proved to be quite interesting with lots of parks, fine buildings and  wide tree -lined avenues. It also ranks third in  South America when it comes to air pollution. This is partly due to its geography, lying in a basin with the Andes behind it, but also because it has more cars than any other city in Chile.
It also has more stray dogs per head of population than any other city though it is hard to get a figure on this.
Unlike the dogs in Bolivia, these dogs are sleek and well fed and better looked after than many a homeless person. They have kennels in the parks and little coats to wear in winter. Chileans and probably South Americans in general do not believe in de -sexing their animals - not even the strays and there was a public outcry when the local authorities put three of them down. Instead, everyone feels obliged to feed them, pat them and look after them, should one attach itself to their person.
You learn all these wonderful tidbits by taking a Tour for Tips rather like the one I did in Valparaiso. This one was led by Lisette and Matthais. We looked at several splendid churches and public buildings including the huge Cathedral in the centre of town which was in the process of being rebuilt for the seventh time after a major earthquake. As in La Paz, while the Presidential Palace has been restored, at least one of the surrounding buildings still bears bullet holes from the 1973 military coup. Although an independent tribunal last year confirmed that Allende committed suicide, how he could have achieved that with an AK 47 remains a mystery. Despite all the evils perpetrated under Pinochet's regime - the suppression of dissent, the 3,000 disappeared or missing and the 200,000 driven into exile, 46% of the population still voted for him when elections were finally held after seventeen years of military dictatorship. The reason given was that he brought economic stability to the country, though no doubt as far as the rich were concerned he effectively stopped their land being redistributed to the poor. Chile remains very conservative. It is still a highly stratified society with education only for the wealthy. Divorce and abortion are still illegal  and so is gay marriage, although these issues are now being debated. It is also somewhat racist in that the lighter your skin and your eyes, the more chance you have to succeed. People count their blessings. No one talks politics.

On a lighter note we also called at a cafe with legs - something quite original and unique to Santiago. Coffee, easily grown in South America was introduced  in the 1920's to displace imported English tea, but to attract the attention of  the elite they had it served by underclad waitresses in special coffee shops in the business district. Some of these still exist today (see below) but I was chased out of this one as soon as I pulled out my camera. It is said that President Clinton rather enjoyed his visit to one of these while bored during an
official visit. Inside the ladies wore red bikinis or only the bottoms in one case and rumour has it that at least once a day they take those off too, though the time is never specified. Guaranteed to keep hot blooded Chilean males keep coming back for their caffeine. 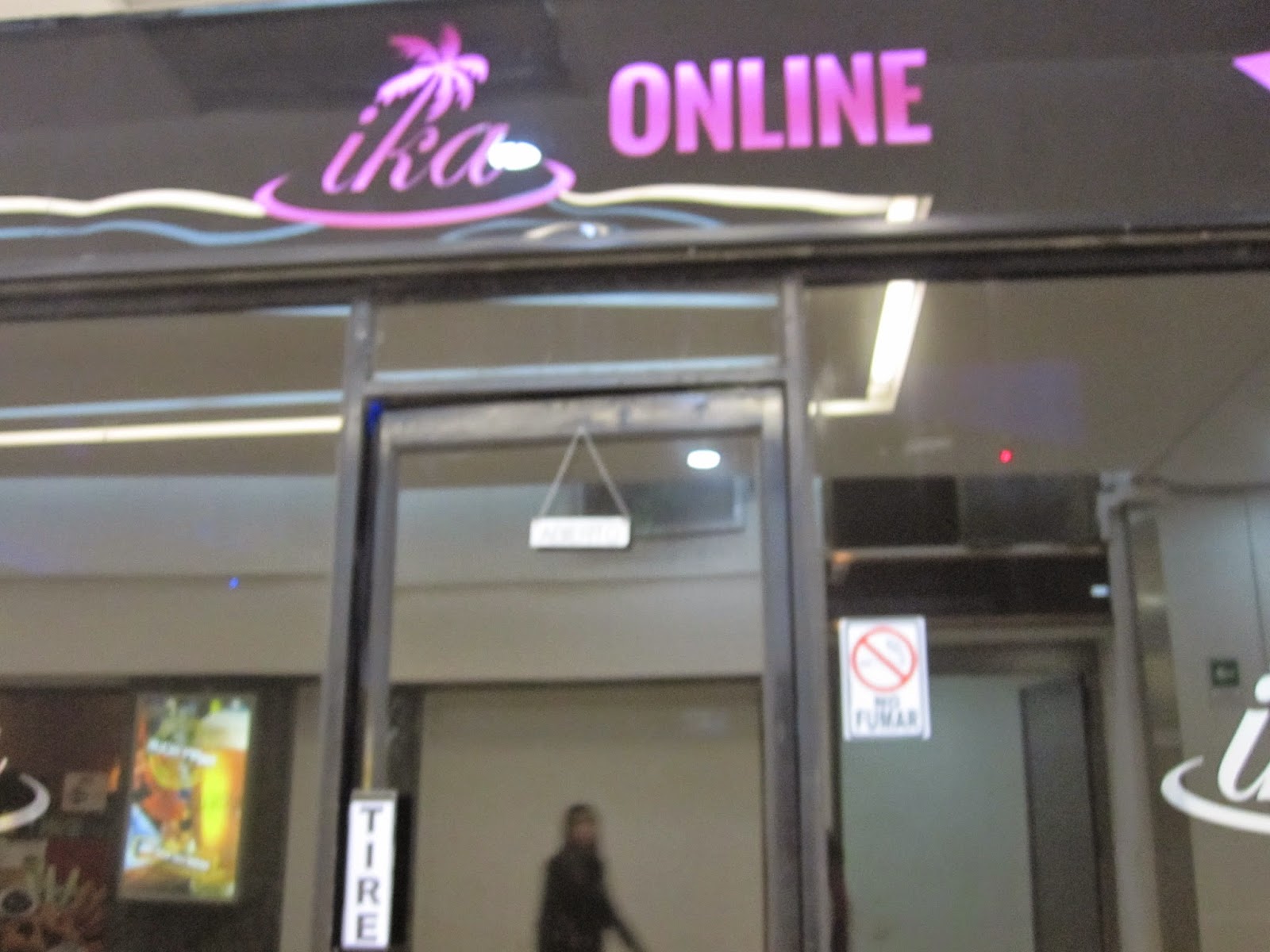 One of the the other highlights of my tour was an ice cream tasting. There are hundreds of ice cream shops  all over Chile as Chileans eat 7-8 kilograms of the stuff per head each year regardless of the season. The difference with this particular shop was that it was voted 25th in the whole world. Salted caramel was delicious, but having had caramel on almost everything for months, I was a bit caramelled out. Chocolate chilli was nice too, but in the end I had the house specialty - rose petal ice cream, before making my way to a very crowded peak hour subway. Three trains went by before I could squeeze on and even then the doors wouldn't close because a lady's handbag was caught between them. They do not have pushers as in Japan, but they do have ladies to make sure that you don't get pushed off the platform into the path of onrushing trains.
Another highlight was an impromptu dance performance at the Gabriela Mistral Cultural Centre. This was built by Allende in 1972 with physical assistance from the people of Santiago but later appropriated by Pinochet to house the Ministry of Defence. It seems very fitting that it has been returned to the people and is now used for all kinds of performing arts activities.

Along the way we also heard about Chile's indigenous people, the Mapuche who make up about 4.6% of the population about half of whom live around Santiago while the remainder live mostly around central Chile where they work in agriculture and forestry. Although not well treated in the past, the government is now seeking to redress this and their language, once banned, is now being taught in schools.

Public displays of affection are common, mostly for the same reason as in Russia. Accommodation and privacy are hard to come by, especially for young people so parks are one of the few places where young lovers can get together. One of the guides assured me that a good proportion of the local population was conceived there. There is certainly no necking allowed in the churches.The sign below says so.

I spent my last few days in a hostel which had a lovely courtyard, great breakfast, a bar and a pool. It may have been a monastery as it had high vaulted ceilings, but it certainly wasn't one now. And so ended my South American Odyssey for the time being at  least. This is a vast continent and there are many areas which I haven't seen including the Amazon and the entire east coast - Brazil, Argentina and all those smaller countries in between. I carefully avoided Brazil because of the World Cup. It was mad enough in the countries I did visit. Loved the amazing countryside - the Andes, the rainforests, the volcanoes-  and the friendliness of the people. Many thanks to those who made my time there special and helped me out when I was linguistically or otherwise challenged.
Muchas gracias mes amigos and amigas!
at November 30, 2014