A Summit before Breakfast 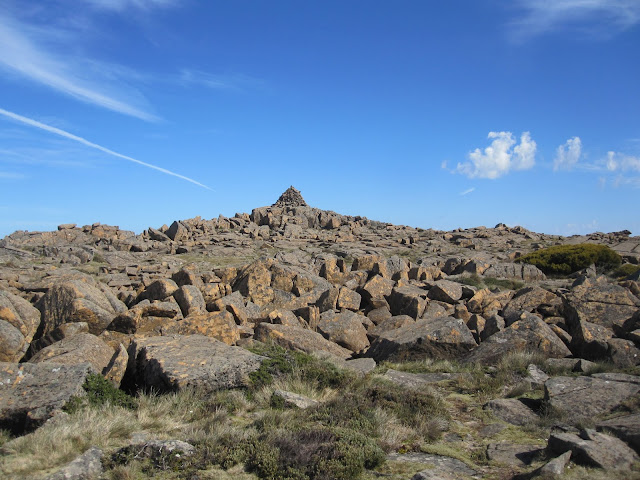 I climbed Legge’s Tor yesterday – another bit of unfinished business from last year. My excuse is that I was already in the area and couldn’t resist. This time I took my poor old van - very, very slowly, all the way up Jacob’s Ladder and started from the Link Track in the Ben Lomond Alpine Village.

It was a beautiful day for it. While the lowlands sweltered at 30 + Degrees C, it was a balmy 19oC up there.  Most of the showier flowering plants we’d seen last time had gone into frantic seed production mode leaving a patchwork of different greens – bright green, blue green, grey green, moss green, spiced up occasionally with a dash of red from the seed pods of the mountain rocket.  A few small flowers put on a brave show especially some yellow daisies and the delightful mountain anemones.

Initially the track was clearly formed and well signed, but once past the two older chalets we’d passed last time on the way up from Carr Villa, there were no more signs. An older guidebook I had seen had shown that the Summit Track started somewhere between the Chalets and there I found a rough foot track which went uphill. This led me onto an open, gently sloping plateau where two rows of lichen covered poles marched off in different directions.

Having glimpsed one of the summit huts on the way up, I knew that the summit lay somewhere above and to the left, so I chose the westward branch which soon turned into a bouldery climb. Gradually the summit cairn came into view and I scrambled over to that. So far so good, though since it was Australia Day, I wished I’d a brought a little Aussie flag to put on top. Otherwise it was almost an anticlimax. Yes, there were great views of distant bluffs and the surrounding valleys, but around the summit itself it was just a sea of shattered rock.  What does make this mountain special is that it rises so abruptly from the surrounding landscape and seems much higher, whereas our tallest peak only rises from an already high elevation and doesn’t seem so high.

Little tracks and more lichen -covered poles brought me to the two summit huts, but then the track just seemed to peter out.  I vaguely remembered something from the guidebook about descending between the ski lifts and promptly attempted that. Not so easy. After a couple of false starts which left me overlooking suicide drops, I did manage to pick my way down much, to the apparent consternation of a little knot of people who had gathered far below.

When I got there I came upon an information board. It said, “After reaching the summit, retrace your steps and walk back the way you’ve come.”  It also showed another walk – the Summit Loop, which must have referred to those other poles that had sauntered off to the North East, but I couldn’t actually see where it started from or ended up. Next time perhaps….

That’s two peaks already this year, and another whole Peak Bagger’s point.  Hartz Peak as it turns out is worth two, making 3 altogether. I’ll have to watch out. At this rate I’ll be thrown out of the Slothbagger's Club.
at January 27, 2018