Two River Rambles – and yes, children, there is something here which you can try at home!

Two more short walks between the showers this week. We are slowly working our way through those walks in the Kingborough Municipality. This time we did the North West Bay River Walk and then the delightfully named Snug River Walk, just past Margate, which also has a River Walk.

What is special about both of these walks – and this is the bit where you could get involved no matter where you are, is that much of the work of rehabilitation and tree planting has been done by school children in conjunction with other groups such as Landcare, Coast Care, the Council and others. Are there places near you that look neglected and run down? Do they need trees, places for animals to nest, somewhere for people to rest, or even just rubbish that needs picking up?  Ask permission first and see if any other people or groups want to help and you too can be a friend of Mother Nature.

The start of the North West Bay River trail wasn’t all that easy to find. The map showed it as leaving from the Longley Oval near the toilets. We did a full lap of the sportsground before we noticed the sign and the weathered grey vehicle or animal barrier near the entrance.  After that, the track  -though not the “wide gravel path” we were led to expect, was fairly easy to follow through bushland and down to the river with some lovely white gums on the way. At its end there are cliffs like those along Allen's Rivulet and it has shallow rocky pools where platypi are sometimes seen. Despite all the rain, there wasn’t much water flowing, -perhaps because some is abstracted for urban water supplies, and we didn’t see any platypi. Though peaceful and serene now, you can imagine that in warmer and wetter times or when the icecaps melted, a mighty river would have roared through, seeking out weak spots and plucking out boulders as it carved its way to the sea.

The sign for the Snug River Walk was also hard to spot, especially when coming from the north. It’s on the left just over the bridge and opposite the school, shortly before Kettering. If the North West Bay River Trail is more of a wild walk – you could hear lots of birds, the Snug River Walk calmly wends its way through lots of trees and shrubs, marsupial lawns and low marshes where there were ducks and native hens. It opens onto a small, family friendly beach with picnic tables and some lovely views across wide expanses of water. On a good day, according to the signage, you might also see sea eagles or fairy penguins here, but we only saw children launching sailboats and dinghies. I suppose that’s a form of wildlife too.


Rather than go back the way we had come, we crossed the enticing footbridge over the river and then took a rough track on the left. This brought us into former company town Electrona and from there we took the old road back to the car - much better than being buzzed by traffic on the Channel Highway, and ended up having our coffee in the picnic area on the other side of the road. Here too school children have done much planting with emphasis on native species, so that the animals would have a corridor along which they can move. Alas, it didn’t work for one poor wallaby which was lying dead beside the road on the far side of the bridge. Nevertheless, local people and especially the children of Snug Primary School, can be very proud of what they have achieved – for both wildlife and their community. 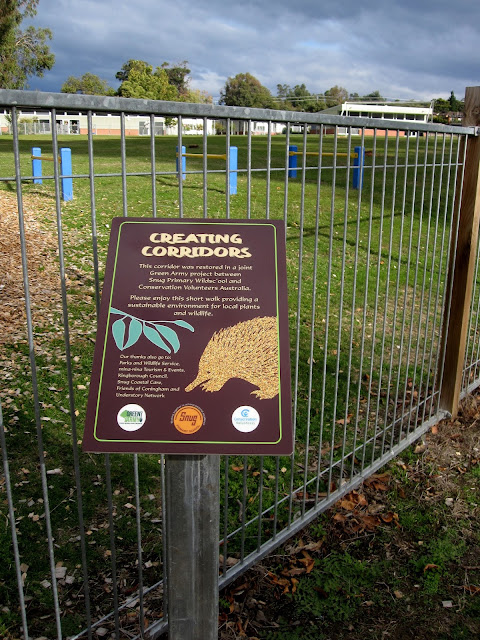