In praise of cubbies and other outdoor pursuits


As the  post about Parks and Playgrounds has been one of the more popular ones of late,  I wanted to write a bit more about outdoor play, especially as I have just read that only 8% of Australian children now play outside. This seems unthinkable. I’m showing my age here, but when I was growing up, staying inside was a form of punishment. It only happened when we were sick or naughty or hadn’t done our homework. Of course there wasn’t much television then, nor were there any distracting computers and not only hadn’t we heard about stranger danger,  there weren’t too many strangers about either. Nevertheless, despite these changes, several things are happening here and there to make outdoor play both possible and safe again.

It’s a pity that enjoying nature now requires organisation and direction, but over in Yanchep in Western Australia they have just had their second hugely successful Cubby Town which attracted an estimated 5,000 people. As well as being able to make structures with material provided  - mostly cardboard and tree branches, children could also enjoy nature crafts, a mud kitchen, a climbing wall  and a high ropes course.

Although Cubby Town is a joint venture between various organisations and departments such as Parks and Wildlife, the local council, the Department of Sport and Recreation and so on, it is largely the brainchild of Nature Play WA  a non - profit organisation devoted to encouraging children and families to spend more time outdoors. As their website says:

Child advocate, Richard Louv, author of “Last Child in theWoods” agrees, saying that many modern affllictions such as obesity, depression and attention difficulties can be attributed to “Nature deficit disorder.” 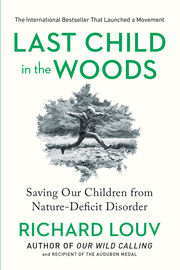 The good news is that you don't have to live in Western Australia to reap benefits. If you are stuck for ways in which to bring nature back into your life, Nature Play has excellent resources for families schools and individuals on their website, regardless of where you live. For instance, you could start your own Family Nature Club in your neighbourhood, or devise your own Passport to an Amazing Childhood. There are tips on how to build an adventure playground with due regard for safety and there are lots of activities which you can try by yourself. Be inspired and don't forget to check out the list of  51 things everyone should do before they turn 12.