Secret Hobart – A cosy night in and an evening out

Our streets are usually rather deserted at this time of year, so where do Hobartians go on a cold winter’s night – that is, those who aren’t hibernating or escaping to Queensland or possibly Tuscany?  I can confide that a goodly number go to the Shambles Brewery in North Hobart on the first Thursday of the month for “A Pint of History.”


Out in the back amongst the barrels and gleaming vats you will find an assortment of history buffs imbibing ales made on the premises, local wines and my own personal favourite, mulled apple cider. All seats are occupied. Tables overflow with food and drink. I and my friend Jane settle for a couple of glasses and a pint of chips. 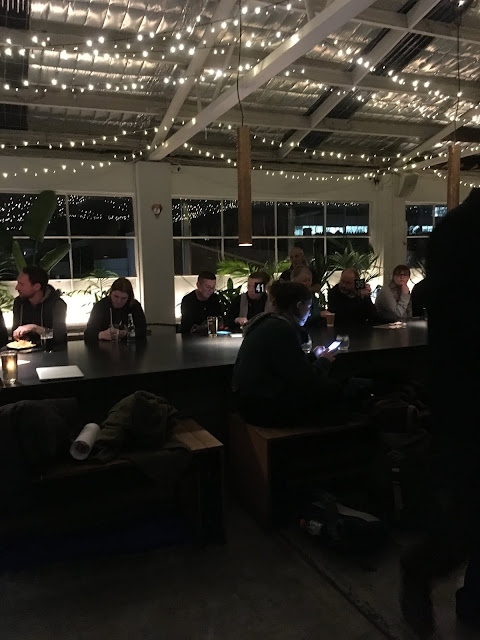 Tonight’s event is called “A cosy night in.” It begins with some light entertainment with the MC presenting fashionable jokes of the C19th.   Most of these fall rather flat, proving how ephemeral humour is. Then there are strictly timed presentations –no more than ten minutes each, by three local historians on obscure aspects of history – the evolution of board games (who would have guessed that one of our eminent historians was a board game aficionado) or what went down in military mess halls or what Arctic explorers did while being snowed in.

Afterwards there’s a bit of Q & A and a raffle of book vouchers and ‘rare‘ books  -all very pleasant and convivial and much more entertaining than speeches delivered in a draughty lecture hall.

I also went out on Wednesday night. My, my social life is really taking off. This time it was for a quiz night at the Royal Yacht Club of Tasmania for another pleasant evening. There were about 120 people at this regular event and the competition though good natured, was fierce. Thanks to a brilliant team member well versed in celeb. doings, we won round one and also earned a round of drinks in a sudden death playoff.  In the second round our collective lack of football knowledge led to defeat by the Smooth Echidnas. Obviously something we shall seek to remedy before the next one. There is a $2 entry for this one, but that's hardly going to break the bank.

Next up it will “Science in the Pub” at the Republic Bar and Grill, also in North Hobart and there are several other little known gatherings which I have yet to attend such as Saturday Irish musical afternoons at the New Sydney Hotel or the monthly meeting of Skeptics in the Pub.

The thing is, no matter what your interest is, be it line dancing, sport, Mah Jong, gospel music, intellectual stimulation, movies, crafts  or Rotary, there will be a group somewhere that caters to it. The secret is to know when and where so that you can commune with like minds, get to know new people or learn something new. If you are coming to Tasmania, do a little research beforehand and you will be pleasantly surprised.

If you don't fancy coming to Tasmania in the depths of winter these are things which you could try at home. Pubs and clubs usually don’t mind as in our case it brings business at a slow time of year. In my case at least, it definitely beats huddling around the heater watching reruns on TV.
at July 26, 2018