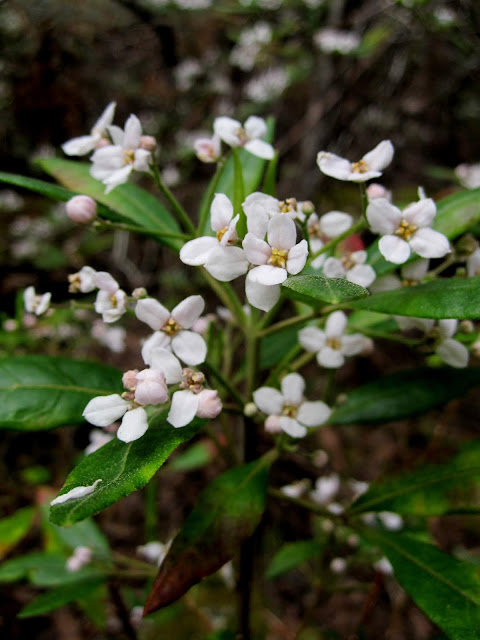 Had a pleasant walk to Pelverata Falls yesterday. It’s only about an hour and a half  south  of Hobart and the winding road to it passes through some through some lovely country – green, undulating  and with lots of daffodils everywhere.

The walk itself was interesting – gently rising and falling through diverse bushland with a bit of a rough rocky climb at the end.  Along the way there were bowers of climbing guinea flowers in bloom and some cute greenhood orchids which, with their outstretched antennae, always remind me of young aliens. There were also some unusual wild flowers I hadn’t seen before and some lovely views over farmland and mountains.

The waterfall itself, all 114 m of it,  was not running as strongly as it would have been a couple of weeks ago with all that rain, but beautiful nonetheless, and the gorge in which into which it tumbles was stunning in its own right. If I had a painting of it, I would have said that’s not how you paint cliffs. They look they look as if they’ve been painted by an amateur  - too uniform, the way the colour has been applied in too even brush strokes and so on, yet  they really do look like that.  The waterfall on the other hand, looks much better than I have been able to show it here.

All up the walk takes around three hours and is fairly easy going, proof being the two or three young children who negotiated it with no shoes. The potential for treading on a snake would deter me from doing that, though we didn’t see any.

Had a little bonus at the end. On the way down we had spotted a sign advertising lemon slices, eggs, vegetables and such.  Most things were already gone, but we did score lemon slices to have with our thermos of coffee, also some daffodils, although some of them looked a bit sad. A friendly man walking by invited us to come to his place and take as many daffodils as we wanted.  I tried not to be too greedy, but he rushed in and picked me some more so I now have daffodils everywhere and enough for the neighbours too. It really does feel like spring.