A serendipitous encounter - A Brewer's Tale

Yes I know it’s April Fool’s Day – did you get pranked? This is not a prank, just a bit of fun. I was having a pleasant stroll through St. Andrew's Park near the old Scots Church when I glimpsed another large tower in the Lane below. This is an interesting area where the sacred and the profane rub shoulders. Always intrigued by our industrial history, I zoomed in and was surprised to find barrels in one of the upper windows. Closer inspection revealed it to be the home of Captain Bligh's Brewery, another of our fine craft breweries* which are rapidly gaining as much attention as Tasmanian cheeses and wine.

A small sign said the brewery was only open on the Third Friday of the month, but when I tapped gingerly on the door, gentleman brewer Steve Brooks interrupted his work loading aromatic malt into a vat and agreed to tell me a bit about the building.  Here’s as much as I can remember…. Where's a pen and paper when you need one? I'll blame it on the fumes.

The building itself dates back to the 1830’s when it housed The Tasmanian Brewing Company.  Alas, the original owner, a gentleman by the name of Punchon, ended up in New Norfolk, where he loved to entertain the visitors who came to the asylum specifically to view the antics of the insane.  Next it became the James Pale Ale Brewery, but Cascade Brewery, determined to gain a monopoly, bought the building along with many of Hobart’s pubs and quietly let it die.
George Adams of Tattersalls fame, bought or built the large building which fronts Warwick Street and runs all the way down to Elizabeth Street where it met the Lord Raglan Hotel.  When George Adams died, his brewing equipment was dragged out onto the street and physically broken up.  This may have coincided with the Temperance Union's efforts to stamp out the Demon Drink.

Some time later, a co –operative of brewers began operating out of the lower building, yet in 1930, it was severely sabotaged with soap being poured into the vats. The Cascade Brewery was once again thought to be behind it, but no charges were ever laid. This time the brewery did not recover. Furniture company, Coogans occupied the site for a time and it was then reincarnated as an antique  store. After being sold again recently, it looks like becoming another distillery, but Steve isn’t fazed. “The more the merrier, “he says with a twinkle in his eye. George Adams would be pleased.

Steve’s been here for five years now. While he specialises in colonial ales, light beer and heritage cider, he has also started making whisky, rum and his own particular version of gin and tonic. I am not a beer drinker, so I can't speak for the quality, but the gin has already won a silver medal. After coming to Tasmania to take care of a sick friend, he and wife Karen couldn’t bring themselves to go back to the rat race. Karen has just published her twelfth book, "The Chocolate Maker's Daughter." The previous one is fittingly entitled “The Brewer’s Tale.” 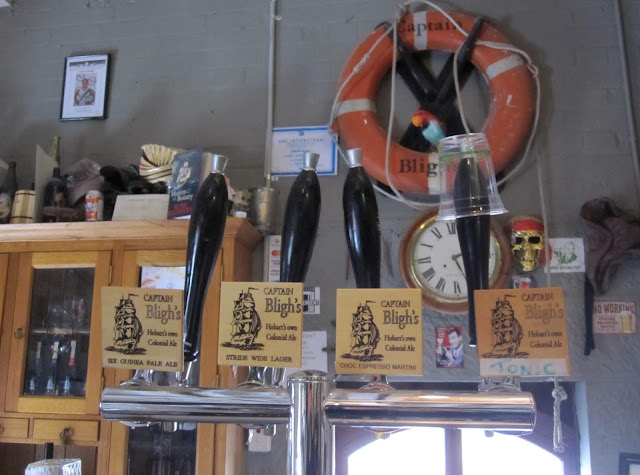 If you want to see inside the brewery and have a jolly good time – there are usually musicians and a food wagon outside, then call in between 4 and 10 pm on the third Friday of the month – the next one will be on April 19.

*Tasmania has twenty plus small craft breweries, eight of them in Launceston, eleven around Hobart, one each in St. Mary's and Railton and one on Bruny Island. Check them out on the Tassie Beer Trail  map or if you can't wait till the Third Friday of the Month, you can taste their products here. Many of them, including Captain Bligh, will be represented at the Fresh Hop Festival in Launceston later this month (April 26-28th). Click here for details.