For about a year now, I have been wondering about a green fringed building I glimpsed from the train window on the way back from Canberra last year. It turns out that it is Number 1 Central Park built by French design group Ateliers Jean Nouvel and Sydney Architects PTW and which was voted best tallest building in the world (beating 87 other competitors) by the Council on Tall Buildings and Urban Habitat at Chicago’s Illionois Institute of Technology for its “visible use of green design.” 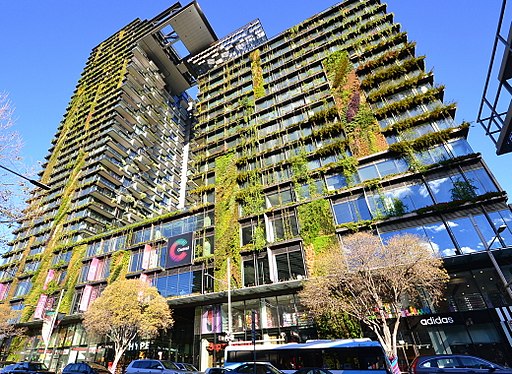 The building which consists of 623 apartments is more than a pretty face.  As well as the 35,200 plants in its hanging gardens, it has a grey water plant which keeps the building green and is expected to save the city one million litres of drinking water a day. Its tri –generation plant will save 136,000 tons of greenhouses gases from entering the atmosphere over 25 years, as well as minimising noise, heat and pollution. It also features a heliostat which bounces natural light into retail areas and public spaces during the day and features an LED light display at night. 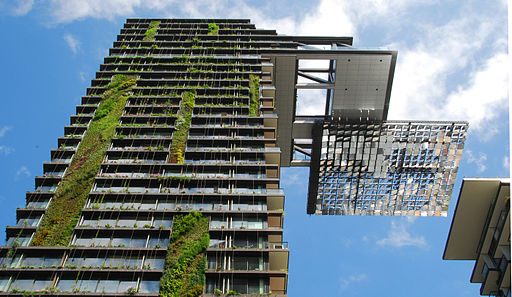 Showing off the Heliostat
Image by bobarc [CC BY 2.0 (https://creativecommons.org/licenses/by/2.0)]

It’s a trend which is rapidly gaining acceptance in many parts of the world. Largely propagated by Milanese Architect Stefano Boeri, green buildings and vertical forests are sprouting from Mexico to Albania and from Cairo to Jakarta. China which never does things by halves, has recently commissioned him to build a whole town. The Liuzou Forest City which will be home to 30,000 people, will have 40,000 trees and over one million plants. Together they will sequester 10,000 tons of CO2 and remove 57 tons of pollutants per year, as well as contributing 900 tons of oxygen.

According to Stefan Boeri cities could contain as much biomass as rainforest and vertical forests such as those below have the potential to reduce urban heat island effects outside by as much as 30%  and inside by around 3% thereby also reducing energy costs required for cooling. They also encourage biodiversity and provide a better quality of life in urban areas while taking up less space on the ground. These are just a few of the benefits associated with greening our cities. See some examples of his work below and his manifesto. For more on both see his website.

It would be lovely if we could all live in tree houses, though given my failure rate with potplants, I should probably decline unless they are self watering.
at April 07, 2019