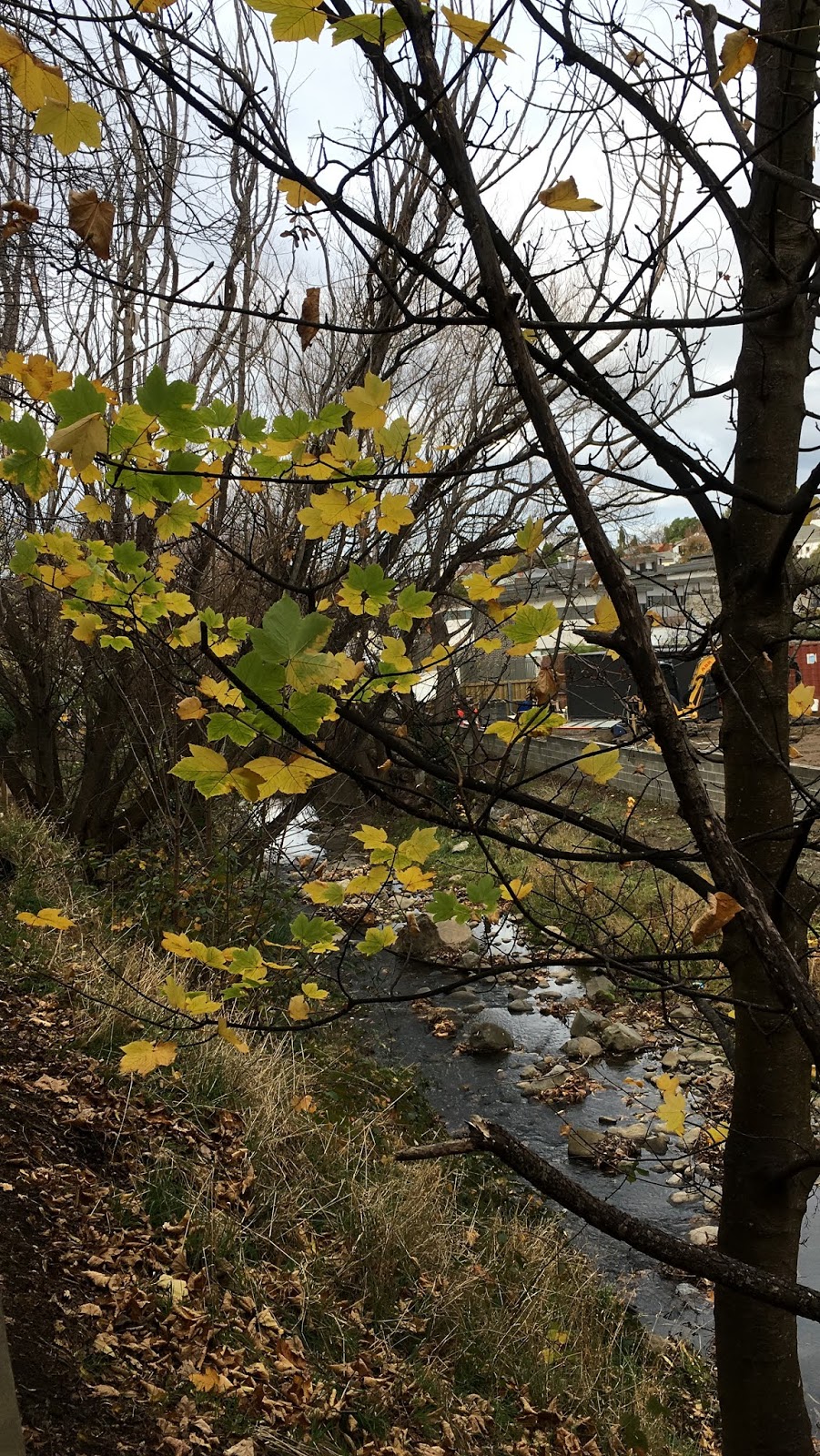 It’s winter. The weather has not been kind these last few weeks, so during occasional breaks in the weather, I’ve been progressively exploring the New Town Rivulet.

Officially this walk isn't very long – only about 6-7 Kilometres in all, but that doesn’t include backtracks, detours or false starts. As well as traversing very different landscapes, it also provides fascinating glimpses into the evolution of Greater Hobart.

The New Town Rivulet begins somewhere on the bushy slopes of Mt. Wellington and after  joining up with other soaks to make a not insubstantial waterfall, it tumbles down the mountain, passing through farmland, through older suburbs such as Lenah Valley and New Town and then empties into the Derwent.  Though I’d walked to the waterfall a couple of times the lower section was a bit of a mystery, so starting at the mouth I began walking uphill. The Rivulet marks the boundary between the City of Hobart and the City of Glenorchy with the present day suburb of New Town straddling both. To people like me who live on the other side of the scrubby hill that is the Domain, this is practically a foreign country. (The Domain does have a very lovely Botanical Garden - the second in Australia, and spectacular views over the Derwent).


It was here in 1804 that Governor Collins, having dropped off his military and convict compliment at Sullivan’s Cove, dropped off his free settlers, not wishing them to mix with his other charges.  Food production being enormously important for the nascent colony - it almost starved, Collins immediately awarded them large land grants to take advantage of the fertile river flats. It is not known what the Mouheneenaa Aboriginal people who gathered shellfish and hunted kangaroos in the area thought of this, having no concept of property ownership other than that they belonged to the land, not the other way around.

Instead, the area around the Rivulet became a place of orchards and rural industry such as dairies, flour mills, tanneries, potteries and brickworks (1820), using its water for irrigation and motive power, as was the case with the Hobart Rivulet. In the 1840’s there were even coal mines* here, though I have seen no further reference to these. As settlers became successful either on the land or in Hobart Town, they began to build impressive houses. You can see some of these after you cross the Brooker Highway and walk along Risdon Road.

Up to this point, the  Rivulet hadn't been all that inspiring. Birds of all kinds obviously appreciated the spot where I parked, but it looked like this was where shopping trolleys came to die. Rubbish lay in shallow water on the edges and snags and logs had caught up on barriers designed to stop them entering the main waterway. They weren’t designed with aesthetics in mind and the river itself was little more than a sluggish ditch restrained within a concrete barrier. It could in fact be tidal here. According to an old newspaper article, much of what I was looking at had been reclaimed from mudflats in 1912, and  even that was probably an improvement on what  was there before. Until 1905 this Bay had been the local rubbish tip. To be fair, I did notice a landscaped picnic area on the opposite bank but there was nowhere to cross.


The first place I noticed  was“Poplarville” or “The Pines” as it was later known. It was built as a ‘weekender’ by ex -convict Henry Pearce in 1844. He initially made his money with market gardens which supplied vegetables to the colony. He then bought ships and built some of the warehouses in Salamanca Place for his import/export business.  Much of the timber and some of the more decorative sandstone came from the UK on his ships. Geoff Ritchie has written eloquently about this in his Convict Trail Blog.  He has also written about “Lauderdale” another fine Georgian mansion a little further down the road. Now a National Trust Property, this was built by mill owner, John Mezger in 1844. The gate was closed  alas, so I couldn’t see much of this one, so I thought I would take a look at “Runnymede,“ another  National Trust property, just a little up the hill which had been owned by a Captain Bayley, a whaler. Although normally open to the public, it was just being closed up for winter maintenance when I arrived, so I could only take a walk around the garden. Still, looking out across the fruit trees over what was called Stainforth;s Cove, it was easy to imagine what life would have been like when the only access was by sea and colonists were required to be more or less self- reliant.

Further up the hill you can see some of the grand mansions which were built in the late C19th when Hobart was enjoying a boom, but I'm saving save those for another walk. Instead, I continued to follow what seemed to be the Rivulet’s course further along Risdon Road, that is, until it suddenly disappeared under a side street and didn’t seem to come out anywhere. Houses had been built where it should have been and I assumed that it was one of those places that had fallen victim to earlier ideas of progress, when wetlands were drained, rivers were confined to ditches and drains, and the land above them was filled in and reclaimed. In fairness, urban waterways were previously generally treated as little more than convenient sewers and were often associated with epidemics and miasmas, not to mention being the breeding ground for rats and mosquitoes, so their replacement with playing fields and the like was also an improvement.

Despite ducking behind backyards and squeezing through a gap in a high chain-link fence, I never did pick up the trail again, at least not on this day.  I often wonder how these transitions occur – from the grand buildings of the earlier days of settlement, to the much more modest ones which were apparent here. Farms and growing factories obviously needed workers, so that was one possible explanation. Another manifested itself as soon as I returned to Risdon Road.

Almost immediately I passed under a high sandstone overpass which now carries the Intercity cycleway but once carried the railway to Brighton. This opened in 1876 and made New Town a commuter suburb of Hobart, rather than a rural retreat for the wealthy. The large estates were subdivided into smaller lots and a tramway was added in 1893. Rising rents, crowding and a typhoid outbreak in the city of Hobart in 1887 -88, no doubt encouraged this flight from the city.  The return of soldiers after WWI and the 1922 opening of the Electrolytic Zinc Works which employed some 1,300 workers, also led to increased demand for housing. EZ had planned to build a village near its plant for its workers, just a bit further around the Bay from the start of my walk, but few wanted to live there and this coupled with rising costs, led to few houses being built. However, EZ did enable workers to build their own homes around New Town, Moonah and Glenorchy and subsidised worker’s fares.

With the growth of the city and private car ownership, the railway closed in 1974 and trams ceased operating in 1960, to be replaced by trolley buses until 1968, when these too were replaced by buses. Buses were simply better at dealing with urban sprawl, though there are rumours of making this route into a light rail again.


Across the road on my left, I could see more modern manifestations of urban life – A large service station, Kmart and its attendant shopping centre and parking lot, along with many smaller, one family homes which did not need servants to manage them. On my side and around the intersection with New Town Road, there were still some charming cottages  right up to and around New Town Road which used to be the main artery out of Hobart until 1954, when the Brooker Highway was built.  Right on the corner stands the The Maypole Hotel. It's been in continuous operation since 1844 and sometimes doubled as a courthouse.* Despite several renovations, the façade of the original building can still be seen at the back.

Despite some signs of a walking track to the north of the Maypole, this proved to be inaccessible due to construction work on a new “Liquor Barn.”  Across New Town Road it also looked  as if the track might continue, but although I could see a playground beyond it, access was denied by a large fence. There didn’t seem to be any way around this one, so this is where my explorations ended for the day.