Dancing in Gumboots - Scenes from the Huon Valley Apple Festival


On a more light -hearted note, I spent last Saturday at the Willie Smith Apple Festival in the Huon Valley.  The Huon certainly needs it after the devastating fires of the summer, which left many businesses still struggling and trying to recover. This was definitely a case of fighting fire with fire.

I didn’t hold out much hope at first. Despite the snow on the mountain, we’d had positively biblical rain all morning and when I arrived at the sports ground where the festival was being held, cars were being turned away because unless you had four wheel drive it was too muddy to drive in. The idea was to park in Huonville and take advantage of the free shuttle buses that were being run from there. However,  thinking I would be OK with my truck tyres, I promptly got bogged on a grassy verge.  Many thanks to the long suffering ground crew who solved this problem fairly promptly. I was also very grateful that my van remained nearby as I could swap my leather boots for gumboots, put on extra  jumpers as the night wore on, and even had  a set  of dry clothes should the need arise.  Even better, I had two doonas and a down sleeping bag in case I couldn’t drive out. 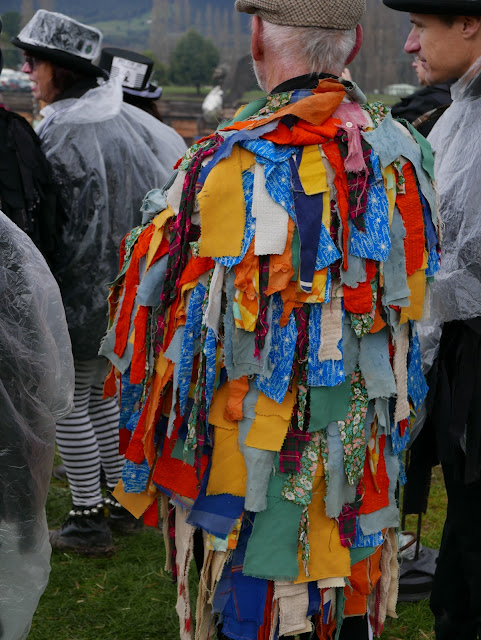 The Apple Festival is a much more rustic and laid -back affair than Dark Mofo. Think old fashioned bush dance –hay bales and fiddle music, meets country fair with a few ancient Anglo Saxon traditions thrown in.  Neither the cold, nor the mud, nor the occasional shower seemed to dampen anyone’s enthusiasm.  An estimated 20,000 were expected with some 25% of them from interstate. Colourful Morris dancers danced up a storm in the afternoon ostensibly to make the sun come up. Beautiful creatures, glided by, or wobbled or squelched by, depending on their footwear. Some were horned, some wore crowns of leaves and flowers or sported crazy eye makeup.  Strolling entertainers drew crowds and the many food stalls and cider bars were busy.

The efforts of the Morris Dancers paid off. Not that the sun came up, but a bright clear moon did. After dark, the gigantic bonfire with wood the size of telegraph poles lit up the night. Poor Willie, the two -storey high  straw man, had met his fate the night before and now only his skeleton glowed eerily on the hill. People began to gather around the many fire pits with their jugs or enamelled mugs in hand. There were displays of traditional woodwork, fortune tellers, craft workers selling leather goods, woodwork, jewellery and the like, and places to have your hair braided or make your own nature inspired crown.

Soon the three main entertainment areas began to fill up – the main tent resonated alternately with Irish reels, rock or rousing shearing songs. The smaller Apple Shed with its couches and armchairs, was the venue for small groups and comedians while in the Storytellers’ Tent right up the back, there were the plaintive notes of a folk singer with an acoustic guitar. The Feasting Tent  had its own entertainment - a lively trio with concertina, piano and washboard which played English Music Hall favourites.

At around eightish, I followed a phalanx of people led by children and the Morris Dancers carrying flaming brands, to the apple orchard at the top of the hill where the real business of the evening began. Small children affixed cider soaked toast to the apple trees to attract the birds and the rest of us dutifully wassailed them, the trees, that is, singing lustily and drinking liberally to their health. After each toast people banged on pots and pans and a gun was fired to scare away unfriendly spirits. I can assure you there were none and if those apple trees don’t produce a gazillion apples, it won’t be any fault of ours.


For some reason I started to feel a bit flat after that. Maybe it was because by this time I had been here for over six  hours and I was now almost out of money. I was also rather wishing I had come with a jolly group of friends so that I could continue to celebrate, but that mood dissippated as soon as I stopped by a fire pit. People immediately drew me into their circle and I was alone no more. Fortified with hot chestnuts and a last mug of mulled cider for which I was a dollar short, I soon found myself dancing the night away amid the straw and the mud.   When the band simply couldn’t play another encore, it was time to say goodbye to all my new best friends and head for home, though by now I was rather wishing I had booked for three nights instead of one.

Although similar winter festivities can be observed throughout much of the UK, Willie Smith’s is now regarded as the biggest Apple Festival in the world.  They are all about conviviality and bringing the sunshine back on these long cold winter nights. It certainly worked for me. Let’s hope it does so for the Huon Valley too. Here's the song so you can practice for next year

“Old Apple Tree we’ll wassail thee,
And hoping you will bear.
The Lord does know where we shall be,
To be merry another year.  etc…”