Leven Canyon – Day 5 One for the birds

The main view of Leven Canyon, only a short distance from the carpark, was as spectacular as ever. The second at a lower level, was a bonus and the 697 steps in between them through fern forest were an amazing achievement, though I was glad I was going down and not up. I particularly liked the regular seating, which had encouraging signs like “Nearly there” or “Only 450 to go.” I detected a sense of humour there which is sometimes lacking in the serious pursuit of conservation.

There’s quite a bit on the history of the area and the struggles for its conservation.  I had no idea  that it wasn’t officially made a state reserve until 2001 -after 25 years of lobbying. George Cruikshank after whom the top lookout is named, did start the ball rolling in the 1960’s when he donated a part of his land, but then it came under threat from the Hydro Electric Commission, who thought  the Leven would make another  fine dam along the lines of those on the Mersey. The reason you can see  these beautiful places today is because people who knew them and cared about them, fought for them. 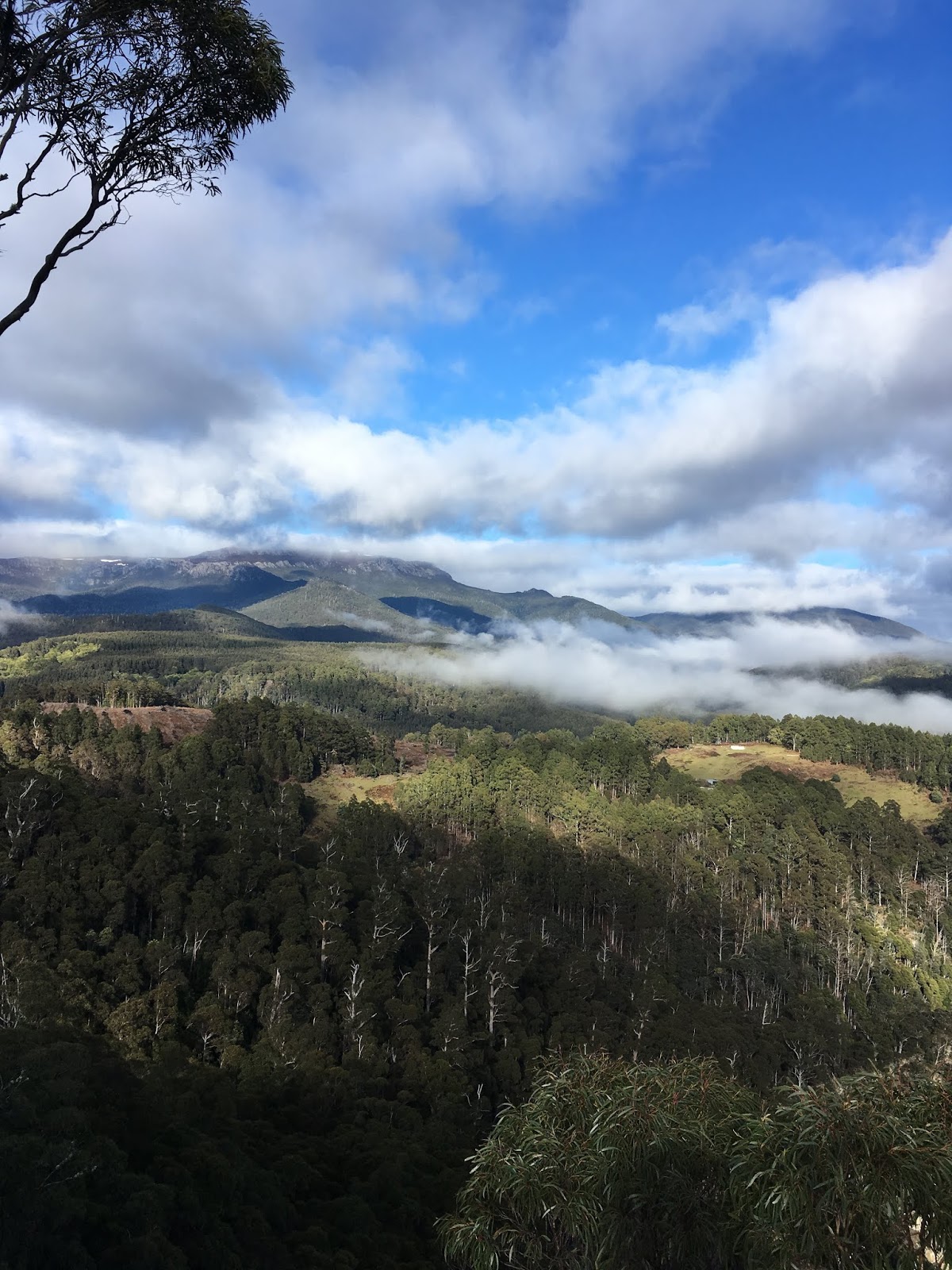 Again, I’m conscious of that other odd thing in Tasmania. How, because the geography has traditionally segregated each region, you know little about what is going on anywhere else. In more analogue times, there were three separate phone books – one for the south, one for the north and one for the northwest, slim volumes all, as well as three separate newspapers for what is essentially a very small population. Historic patterns of travel have also played a role. On the map, it may have seemed that Queenstown with its larger population, would have been a logical service centre for the west of the state, but no matter how hard bureaucrats in distant Hobart tried to make it so, it never worked as people were used to travelling to Burnie for major purchases, dental appointments and the like. That is the way the trains ran before the roads came and each region was a law unto itself and very competitive. It’s why I knew nothing about the Dial Range or Ben Lomond until I actually went there.

The Forest Stairs are the creation of one Stephen McTurk, a track specialist with the Central Coast Council, who, in the 1970’s carried up all the posts, 550 bags of cement and several tonnes of water to make them.  As with Ferndene, the tree ferns in the valley are magnificent, but it’s the birds that I notice most. In the valley I can’t so much see them as hear them, but when I come back out to the picnic area, they are there in all their glory – pink robins, cheeky scarlet robins, parrots, willy wagtails, honey eaters and kookaburras, though kookaburras are in fact imports from the mainland. ). I am glad that the birds still have a refuge here. There is still so much clearing going on in these parts and having just read  about the huge decline in North American birds -three billion lost, since the 1970’s, it makes me anxious for ours.  A brochure I picked about nearby Mt. Roland says that with clearing of rough pasture, blackberries and wetlands and the conversion to monoculture tree farms, several species have become rare or locally extinct.

Certainly there don’t seem to be as many of these pretty little birds about as there used to be – they were one of the things which made me want to live in Tasmania. The wildlife makes an appearance too, in the form of a shy pademelon that sidles up while I am having breakfast. (Don’t feed them, whatever  you do – white bread etc. makes them  sick and or blind.  If you really want to do some feeding, go to one of the wildlife parks and get some pellets to feed the ones that can no longer survive in the wild. Don’t make the animals here dependent on humans.

Afterwards I tackle the Forest Floor Walk, about 1 Km further down the Leven Canyon Road. This too is part of Penguin to Cradle Trail mentioned earlier. It’s also  very pretty with tree ferns and mosses all around and interspersed by giant boulders. The geology is a subject unto itself. The River roars as I descend to the splits – I can see why the Hydro might be interested, but then it turns abruptly westwards to the Devil’s Elbow, where it’s like looking inside a washing machine and the noise gets even louder.

The first part is very easy and only takes about 30 minutes if you don’t mind the walk back up hill. Going further entails more balance and dexterity. The rock formations are spectacular and you even get a glimpse of the Devil’s Face. I would be decidely nervous about bringing younger children here as there are too many cliff faces and drop offs.  I didn’t venture further than this myself.I am under strict instructions that if I want to keep travelling by myself, there will be no rescue missions, though the family has saved up and bought me an EPIRB.  So far the only injury I have experienced on this trip is a leech bite - quite painless, which I didn’t discover until I took off my socks. Some people are allergic though, so check yourself frequently if that’s the case. This walk officially takes about an hour and half, though it may have taken me a little longer.

NB Our own Aussie Backyard Bird Count  runs from