I don’t get to Table Cape very often, so before I left I thought I would do a bit of exploring. My first stop was at Fossil Bluff which proved to be a pleasant surprise, living up to its name and giving some insight into a prehistoric world of glaciers and volcanoes. Then I turned inland. 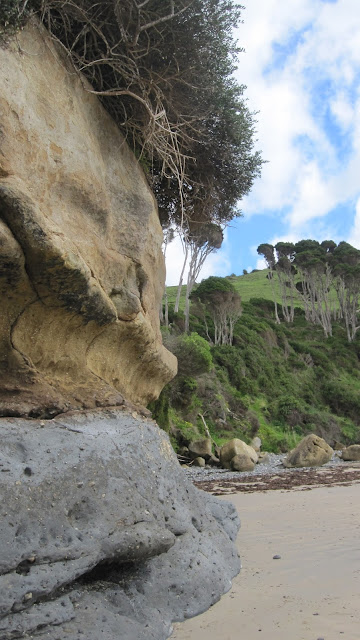 As well as spring being tulip season, it is also a great time to see our waterfalls in action, even the seasonal ones. I’m pretty sure that after all the rain we’ve had, even the elusive Victoria Valley Falls would be flowing.  If you are in the Table Cape area, I can thoroughly recommend a visit to Delaney’s Falls, right near the road on the way to Gunn’s Plains or to Dip Falls to the south, which not only has a sealed road running right up to it, but viewing platforms and stairs going all the way down.

Having seen these I thought I would take a look at two others I had heard about but not seen. Normally I prefer wild waterfalls which, although more difficult to get to, make you feel as if you are close to nature, rather than being surrounded by people taking a quick selfie and jumping back in their cars. Before I left home, I downloaded the track notes and saved the maps, knowing full well that my phone wouldn’t work outside the major cities. (Note to self – I must do something about that). Despite this, both falls proved to be rather more challenging than expected.  I mention my adventures only as a warning to others, assuming we will have visitors to Tasmania again one of these days. It’s not like in Europe or even New Zealand, where every attraction is accessible and clearly signed.

1.     Preolenna/Coalmine or Garner’s Creek Falls (they are one and the same place)

After negotiating the winding backroad south to this little place – no shops, no Post office,  just a small clutch of houses and scattered farms, I drove up and down on Coalmine Road, which was where the waterfall was supposed to be, quite close to the main highway. After finding no sign I asked at one of the houses. A lovely young girl told me to go back up the road, go past the bridge and take the first left after Kinches Road. I was then to follow this forestry road around until I saw a gap in the trees. After a while I would come to a four -wheel drive track to where there’d be a bit of pink tape on the trees.

I parked my car near said road and walked and walked. There was a very large gap in the trees, where some clear felling had taken place – perhaps she hadn’t been there for a while, and there were countless four – wheel drive tracks, but apart from one which led to a lake, none of them led anywhere. My nasty suspicious mind began to wonder if this was deliberate. Sometimes local people do like to have a bit of joke at the expense of tourists and even worse, I'd seen a lot of car parts and motorbikes out the front of the house where I had asked. That made me a bit anxious until I caught sight of my van again and saw that it still had all its wheels.  I apologise for my dark thoughts. Still disappointed that I hadn’t found the waterfall, I started heading out of town. As I paused at a turn –off, a small truck that had been ahead of me backed up and the driver asked if I was lost. He also gave me further directions to the waterfall and given that I would be unlikely to be back this way, I thought I would give it one more try.

He said I should take the track directly opposite Kinches Road. He also said I should keep a lookout for the very important bit of pink tape. This unfortunately misled me into by -passing the sidetrack to the waterfall and doing another bit of a ramble in vain, but after starting over, renegotiating two enormous puddles and a place where the creek ran over the track, I eventually found the right track and the waterfall. The pink tape is at the end of this sidetrack and marks the place where you climb down to get to the waterfall. The waterfall itself was very worthwhile – about ten metres  high, set in a fern gully and running splendidly. It's also in what appears to be the only patch of native forest left here and the sound of birdsong filled the air. With just a couple of little tweaks –  small signs perhaps, or even just more pink tape at the start of the road and the start of the side track would be a big help. Along with a culvert or two, this would make this a very pleasant waterfall to visit.