How not to protect Biodiversity and the Plush Toy Protest 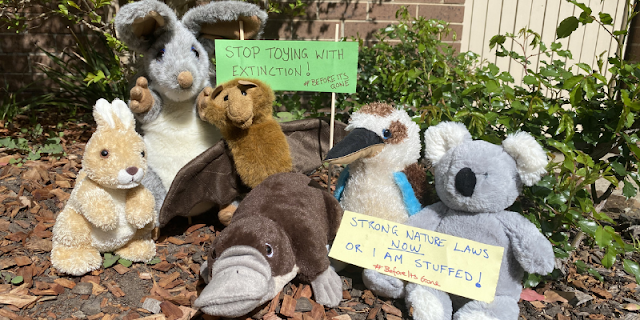 Sending in our surrogate protestors -The Wilderness Society's Plushie Protest

On some days I am not proud to be an Australian.

“A Recipe for Extinction”

Under the cover of the Pandemic and in thrall to mining companies and their lobbyists, the Australian Government is pushing through laws which will diminish the limited environmental protections which we have.  With the promise of “slashing Green Tape” it will allow the States to make development decisions, rather than having enforceable national standards and retaining some kind of oversight - i.e. an independent watchdog, to make sure that we protect what is left of our natural heritage and to ensure that we meet our international obligations with regard to maintaining and restoring biodiversity.  The Australian Branch of the World Wildlife Fund calls it   ‘a recipe for extinction’ as if Australia wasn’t already failing many species even before the bushfires as well presiding over one of the worst extinction rates in modern history.

Why we need stronger environmental laws not weaker ones

Now we can expect the same unfettered  free -for -all among individual states competing for development at all costs which we had before, without regard for the national outcome  which was to include representative examples of different  habitats to preserve our unique wildlife and other species.  It was precisely bitter disputes over such things as logging, dams and development which necessitated Federal intervention in the first place. Without the admittedly limited Environment Protection and Biodiversity Act of 1999, we would have had oil drilling on the Barrier Reef and dams on the Franklin and already, even before the new legislation has passed through the Senate; some of Tasmania’s critically endangered Swift Parrot habitat is earmarked for logging.

Despite objections and submissions from some 60 environmental groups, the new law was pushed through the Lower House of Parliament last week with the Morrison Government gagging all debate. This is not only a blow for the environment but also one against our democratic principles. Unfortunately, with Social Distancing still in place and many people still in Lockdown or with restrictions on gatherings, normal protests were not possible, so people have sent photos of their plush toys carrying their message instead.

Before it's too late

Though the official date for plushie photos was October 1, the legislation is due to go to the Senate this week, so there is still time to voice your concern. Contact your local MP, the Prime Minister, Scott Morrison and Environment Minister Sussan Ley per Facebook or any other medium at your disposal and tell them we need stronger laws not weaker ones, if our native species, we and even the economy are to prosper in future. Do our elected representatives who only gained office by a paper thin margin, think that tourists come to visit abandoned open cut mines?  [As far as democracy goes, we are also falling behind. According to Human Rights Watch organisation CIVICUS Monitor, we were already on par with Ghana and Botswana in 2019 (p. 28) which doesn't include the latest attacks on press freedom, human rights, and openness of government and increased powers of surveillance and detention].

On the international front, along with Russia, China and USA, Australia has also refused to sign the UN Pledge to safeguard the environment and protect at least 30% of its land and seas, the minimum deemed necessary to avert large scale extinctions, which 64 countries have already signed.

According to the scorecard released ahead of the Summit on September 30, only six of the twenty targets agreed  upon by 150 countries in 2010 have been achieved, and then only partially, with most countries continuing to face ecological collapse.  Biodiversity hotspots such as Indonesia and Brazil have also refused to sign, which is a tragedy for global wildlife and other species. If large economies such as Russia, China and the USA show no leadership, what hope is there for smaller ones, not to mention the world’s plants and animals, even without climate change being factored in? In case we need reminding, listen to David Attenborough talk about what we stand to lose.