Homelessness - Down at the Starlight Hotel 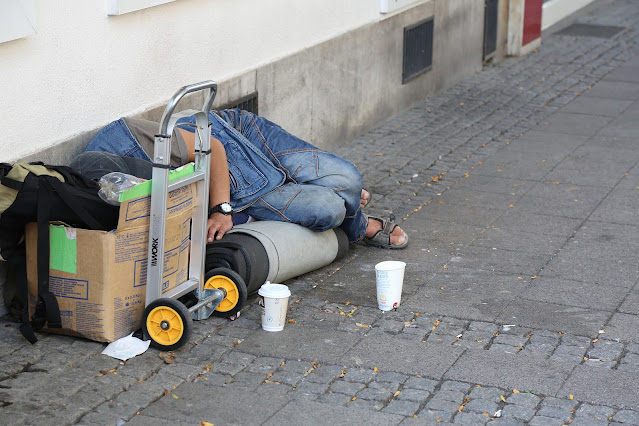 Image by Apollo22 from Pixabay

I had an odd encounter a couple of weeks ago. I was in the underground shopping centre when someone tried to phone me. The signal was really distorted so I grabbed my shopping trolley full of groceries and headed out to the back of the carpark to take the call. When I got there, there were several people already standing or sitting around and they all had their shopping trolleys too. As I was talking one tapped me on the shoulder and said, “You should move over there," pointing out a covered area between the carpark and the street, “Out of the wind, see.”

When I finished my call I realised that they were all homeless and thought I was homeless too. My trolley was full of assorted shopping bags. Theirs were full of piles of clothes, ratty backpacks and maybe a sleeping bag wrapped up in plastic. I was already late for an appointment, but promised I’d come back and talk to them another day.  The weather was awful for the next week or so, but yesterday I caught up with one of the people again.

Tex is a bit of a celebrity among the homeless since he has been interviewed on TV a couple of times. He’s outgoing and chatty and looks after the others a bit. Today he’s sitting on a bench on the edge of a courtyard between the shops. He’s surrounded by broken cigarette butts from which he’s trying to extract a few remaining crumbs of tobacco. He calls me over and pats the rather grubby bar runner beside him that says Carlton Draft. I’m a bit reluctant. I sit on the far end of the bench, as far away as possible, hoping no one will see me and that I don’t get anything on my coat.

Tex appears to be in his late forties or early fifties, though you can’t always tell– homeless people tend to age faster and die younger than their peers. I thought he may have been one of the many middle -aged men who lost their jobs in the 1980's and 90s when when manufacturing moved offshore, but no, he’s lived on the streets since the age of eight, when his father threw him out for smoking.  He tells me he’s quite used to sleeping in the starlight hotel, though I imagine it’s not much fun during a Tassie winter when the temperature can dip below zero.

“What about the hostels?” I ask him. There are some run by various churches and charities. “Nah," he says, “You go in there and then you get all those other people as well. They might be even more desperate than you. They don’t steal from the banks." He gives one of his small backpacks an affectionate pat. "Lost me wallet and me beer once.“he says. “It’s not about pride then, “I say.

“You have to forget about pride if you’re homeless,” says Tex. “They all look down on you, but I like it when they bring food.”  As we talk, I keep wondering how Tex would look in a business suit and a smart haircut.  He hasn’t done a bad job of shaving. It’s a bit hard to pull yourself up by the bootstraps though when you’ve got nowhere to sleep or shower and there are  too many people competing for every job.

So why am I telling you about this? Homelessness isn’t just a problem for Tasmania or Australia. The UN estimates that around 1.1 billion people are homeless. That's around 14% of the world’s population. Even worse, homelessness is on the rise in almost every country, including so- called rich ones and it's expected that the numbers will rise again due to the pandemic. The European Union estimates that there are around 700,000 people sleeping rough  within its borders, a 70% increase in the last 10 years and according to the Homeless World Cup, which collates information from service providers and NGOs, New York alone has more homeless people (74,000) than Mumbai (69,000), with Los Angeles not far behind (58,000), despite having a fraction of the population. Not all countries keep accurate records and many homeless people remain invisible. Those who sleep rough, in their cars or on floors or couches at relatives or friends' places  generally don't show up in the statistics.

As we sit, two more people join us. One is a young man, maybe 18 or so. He sits a little apart and has his head down. He doesn’t want to talk. The other is an older woman whose mouth works strangely, but who doesn’t speak either. Silently she holds out her hand for a cigarette. Then she shuffles off. While Tex is keen to have his photo taken, I sense that the others are not. Even if they’d agreed, I’d feel like I was invading their privacy or taking away what little dignity they have left. Other people venture closer as I leave. I am a bit afraid of them. It's not as if they are going to do me any harm. Is it because their presence conjures up images of a dystopian future, or reminds me that we are all only a short step away from a similar fate? We distance ourselves. We call them 'they' to distinguish ourselves even more. Are we afraid that it could be catching?

Young people, already marginalised groups such as First Nations people, single  parents, the disabled and the mentally ill are over -represented among the homeless both in Australia and elsewhere, but increasingly they are being joined by older women, returned servicemen and people who have been recently released from hospital or prison. Over the last two decades, charities have also been noticing a new clientele – well- dressed middle class citizens unable to meet mortgage or rent payments or, having done so, have no money left for food. Income support payments for the unemployed in Australia have fallen to 50% below the poverty line. The reason we don't see more people actually sleeping on the street, is that although Vagrancy Laws have for the most part been dropped in Australia, the Victorian era mentality that inspired them prevails. Police are urged to give "move on" orders or charge people for disorderly conduct or not having visible means of support. Fines may also be issued by councils through any number of bylaws for things like illegal camping, trespass, public begging or creating a public nuisance. Street furniture is deliberately designed to discourage public sleeping. Families with children keep an even lower profile for fear of losing custody. In 2018, 1320 people were still prosecuted under the UK Vagrancy Act  even though rough sleeping increased by 70% between 2014 and 2018, the maximum fine being £1000 ($US1362).

Next time we'll talk about some of the reasons why homelessness is a growing problem and then we'll look at ways in which  other places are dealing with it.