More Bee News - The Good, The Not so Good and the Ugly

-Bees among the Lavender by Beverly Buckley from Pixabay

I notice that fourth Graders at an Irish Primary School (Presentation Primary) are planting a bee garden as part of the Green-Schools Ireland Programme which teaches environmental education in schools.

This is a lovely idea. Lone bees and especially native bees would probably prefer a bee hotel though it doesn't have to be as fancy as the one below. See the instructions for making all kinds of different ones here.

In The USA, The Bee Conservancy has established around a dozen ‘bee villages’ in inner city community gardens. This not only helps to protect the bees- some species are now listed as endangered in the USA, and teaches people about them, but the bees help to produce virtually twice the amount of produce, thereby benefiting the community in return. The Bee Conservancy has listed a number of other ways to help bees on its website and you can also donate or apply for a hive in your area, though presumably only in the USA.

I've mentioned some of these before under Rewilding and Conservation, but don't forget either about the UK's bee corridors, WildEast calling on UK landholders, schools, churches and home owners to set aside 20% of their land for nature and letting it just be wild, Utrecht's bee friendly Bus shelters and in Norway, office blocks and even cemeteries are being pressed into service as part of its bee highway, to prevent further decline of these important pollinators. It's said that one third of Norway's 200 wild bee species are endangered. Read more about Norway and the EU's plans for bees here.

In not so good news, a number of temporary exemptions have been granted to sugar beet growers in several European countries and the UK, to allow them to continue using the class of pesticides known as neonics (Neonicotinoids) despite them being banned throughout the EU in 2018 and contrary to scientific advice. Over 900 independent and peer reviewed studies have found these products to be harmful to bees, insects in general and also the birds that feed on them.

While the industry blames the poor yields of 2020 on the ban on neonics, opponents argue that yields have always fluctuated with or without them and this has been exacerbated in recent times because warmer winters are not killing off the aphids which carry the yellowing virus. Perhaps before reaching for the chemicals, farmers should ask some of the nature -friendly farmers who did experience bumper crops. See more here. Leaving the verges wild for pollinators and beneficial insects is one idea. Another is to deploy armies of ladybirds and praying mantises. I can vouch for the ladybirds. As an experiment we bought some at Christmas to use on berries and kale. Ladybirds can consume up to 50 aphids a day or around 5000 in their lifetime, while their larvae consume a staggering 200 -300 per day! I had to let ours go within a week as they were starting to eat each other and I haven't seen an aphid here since.

In even worse news, several EU countries are now shipping their banned pesticides to other, mostly poorer countries such as Brazil, Mali, Sudan and Pakistan, but also to places like Australia and the USA. Certainly Australian Beekeepers are very concerned about the growing use of neonics as are those in Brazil.

Let’s finish off on a more pleasant note. Click here for a whole list of honeycake recipes. If using a conventional recipe, using honey instead of sugar will make a cake stay moist and keep longer, but you may need to reduce the liquid and cook it at a lower temperature. As you tuck into that golden deliciousness remember to thank the bees. It takes 12 worker bees to produce just one teaspoon of honey and to make half a 225g (half a pound) they need to travel 27,000 km and visit over 1 million flowers. A good worker bee will produce about 1/12 th of a teaspoon of honey in it's short life of between 2 and 4 weeks, depending on whether they belong to a hive or live solitary lives, what their role is and what time of year they were born.

PS Just putting in this picture in solidarity with Ukraine. May the skies be blue again soon. 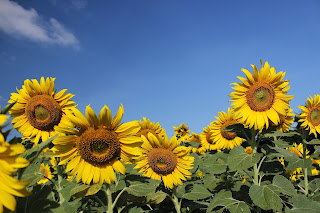 -Image by Tawan Nano from Pixabay