Dear Friends, I can see you aren’t as excited about the topic of Ageing so I’m giving you a break today and promise to finish up on this topic really soon.

It just happens to be World Car -Free Day tomorrow, so I thought we should take a few minutes to think about that. The aim is to showcase more sustainable  forms of transport – walking, cycling and public transport, all of which reduce air pollution and CO2 emissions from the use of fossil fuels. The latter have unfortunately been rising. Obviously organisers hope that the joy of not using one’s car will go beyond that one day and that people will have so much fun that they will want to keep doing it. Usually it involves street closures and street parties, games and perhaps foot or cycle races as well. Read more here about the health costs of pollution from cars. 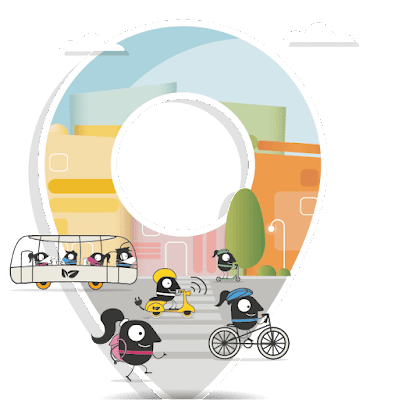 With transport being the EU's second highest polluting sector, 56 countries are also celebrating European Mobility Week which has been running from September 16 to culminate in Car -Free Day.  This year 2,845 towns and cities are hosting  events.  Not all of them are based in Europe. They come from as far afield as Uzbekistan,  Japan, South Korea, Ecuador, Botswana, Iceland, Brazil and Argentina, so there is no reason why your town or country couldn't take part as well. I know it's a bit late for this year, but now would be the time to register and plan for next year's. You can see some typical activities here. You'll notice that many of the actions such as Turkey's activities for the visually impaired involving nature walks and tandem bike rides or Estonia's mobility map for people with disabilities, are still about inclusiveness and accessibility, so we aren't entirely off - topic.

Following the success of its previous Cycle Festival, Nepal is hosting a second one this year. I hope they have sag wagons!

As with World Car -Free Day, there is a more serious side to this as well. It involves city authorities making permanent changes such as adding more bike lanes or improving public transport to make cities safer, healthier and greener for all. You can see some of their activities here. This year’s theme is “Better Connections” and you can read all about that here.