I suppose it had to happen

On some days The Force just isn't with you.
It seems that the ash cloud from the Chilean volcano that disrupted air traffic last week has done a U-Turn and caused another lot of flights to be cancelled. I know it's far worse for the Chileans, but it would have been nice if someone could have told me that before I turned up at the airport bleary -eyed and coffeeless in the wee hours of the morning, along with about five hundred other disgruntled passengers. The late bulletin yesterday said all airports would be open and there was no contact from the airline.


A sign goes up saying the Estimated Departure Time is now 13.50. A collective groan goes up. The Avalon Plane next to us isn't leaving until 15.50. Thank Goodness I didn't choose that one. From Mark in the smoker's pit I heard that this one was cancelled on Monday. His boss has footed his hotel bills but he's not looking forward to the parking fees he'll have run up in Melbourne. At last count they were already up to $180.


The people in front are ringing their hire car company. "Why can't we get it back again? We've already paid for the whole day." A  red -haired woman in the Avalon queue has finally made it to the counter. She has a babe in arms. There are two children's car seats and a mountain of luggage on the weigh - in platform and two small children spin around her like demented planets.  The mother is losing it.
"We've been here since 4.a.m." she screams, turning to yell at one redheaded boy climbing up the luggage chute. "Ryan, get back here! " "And we've already had to pay $30 extra for the baby!"
The girl at the counter is young and unflappable and mutters something like " Sorry. It's company policy."
I feel for the mother. Now I know why they don't let you have tweezers and  nail scissors in your hand luggage. It's so you can't poke anyone in the eye.

Meanwhile our queue has shuffled along and I am at the counter. The new flight arrangements mean that I will be missing the connecting flight to Tasmania, so I ask what will happen then. "We can't tell you that. You 'll have to wait till you get to Melbourne and make enquiries there."

I drop my backpack into the baggage chute and call the family who pick me up and take me home again. Just as we are leaving the board changes to show the flight leaving at 16.10. Oh well, at least I get to have breakfast, a cup of coffee and another farewell.
The plane doesn't leave until around five thirty or six and I arrive in Melbourne just before midnight. There are no flights to Tasmania and there haven't been any all day. They are not sure about tomorrow. Tiger is not taking any further bookings until Monday. Qantas and Virgin are putting their stranded passengers up in hotels. Tiger offers to refund the unused portion of my fare. "We'll know more in the morning." Great. I can hardly wait. I'm simply dying for another night at another airport.

By the time that's over and I have my bags it's too late to call my sister. She's an early -to -bed and early -to -rise sort of person and doesn't answer her phone at that hour.  Besides, I already promised her I wouldn' t make her come to the airport again after the terrible asthma attack she had  last time. Shops are shutting down around me and the cleaners come with those miniature street- sweepers and their mops.  I'm so tired I even manage to sleep on one of those metal seats in International Departures. Wonder who designs those things and whether they tortured flies as a child.


At about 4.30 the pace picks up again. No one knows if anyone will be flying today, but Qantas is accepting bookings for Saturday, so I bite the bullet. With such a backlog of desperate passengers there are no discount fares or standby and it peeves me to think I could have flown to Bali for about the same money, but I am dreaming of long hot showers, my own bed and a very long uninterrupted sleep.

I ring my sister. At least she's home and hasn't gone to volunteer her services at some far flung cultural event. There' s a new orange bus she says, that goes all the way out to her place. Alas, no one can tell me where the stop is, not even the tourist information service, so I go with Skybus instead which should at least take me to the central railway station. This is an express bus that is supposed to take 20 minutes to reach the city but the Freeway is choked with traffic. I overhear the driver responding to the radio request about his estimated time of arrival. "Next Tuesday," he replies wearily. 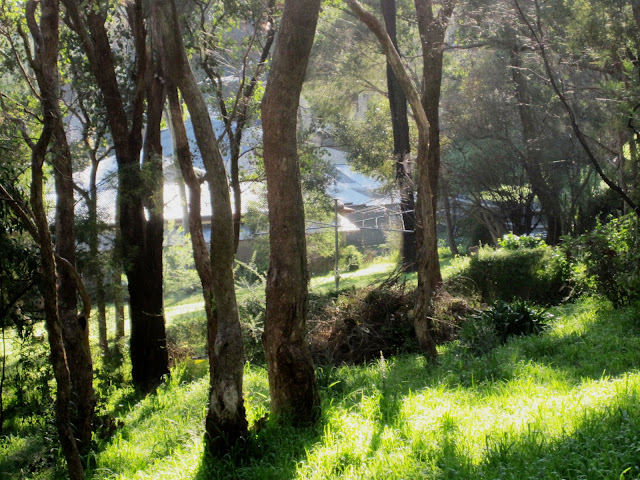 Eventually we do get there and after  finding the right station for outer suburbia, the right platform and a ticket, I'm on my way.  My sister greets me like the prodigal son minus the fatted calf, and we have a couple of relaxing days - bird song, dappled sunlight, a couple of good movies and I'm off again. I'm glad she's given me a doggy bag. It's a long way to Gate 9.

Thanks Sis for saving your prodigal sister yet again!
P.S. One of the nice things about paying for a full price fare is that you still get a sandwich and a small bottle of water. I had told my son not to bother coming early because the planes are always late and it takes ages to get the bags. He took me at my word. This time the flight arrived early (possibly making aviation hisory) and I was the last person standing in the pick up and drop off lane. I couldn't ring because my mobile was completely dead. Two more planes came and went and the Federal Police were starting to take an interest. I forgot that this son does live in a slightly different space time continuum to the rest of us and "later" could mean anything.

However, you'll be pleased to know that he did come eventually and I am now safely home. I promise I won't set foot outside the door for at least the next couple of months and can I please have that nervous breakdown now? I' m sure I have earned it.
at June 22, 2011