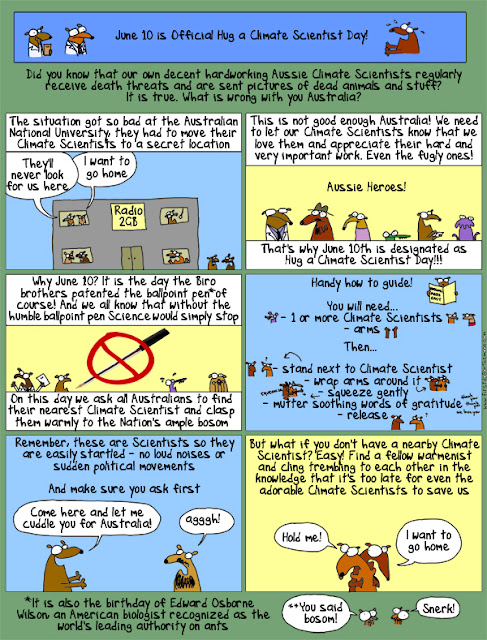 Here is the lovely cartoon by First Dog on the Moon which was published in June last year by Crikey, our very own and very witty independent news outlet.

First Dog who very kindly let me use this, is approaching the UN to have the 21st of June, declared International Hug a Climate Scientist Day.
Petition your Government NOW!

Later...
Just had a weird thought. I wonder if there are now a lot bewildered scientists getting hugs from strangers. Hope it doesn't lead to any harrassment suits!

An  Australian friend who lives overseas emailed last night saying he wasn't too sure about signing a petition for Canada. Well my answer is that neither the climate, nor the air, nor the oceans recognise national boundaries, so if people are messing things up in one place, sooner or later others will be affected too. Rubbish ends up in Antarctica, chokes fish that are caught off our shores or migrate up or down the East Australian current or the Gulfstream. Chemicals wash into groundwater and the seas. Coal dust from China blows over Korea. Windborne seeds from GMOs wind up on organic farms and in neighbouring countries, so do the pesticide resistant insects. Thanks to globalisation, chemical contamination reaches right up the foodchain, regardless of where you live. GMO corn fed to cattle in Argentina winds up on your plate in Maine. Global warming will affect us all and other species, so I don't feel bad about telling other countries and my own, to cease and desist with undesirable or destructive practices. It's our world too.
Email Post