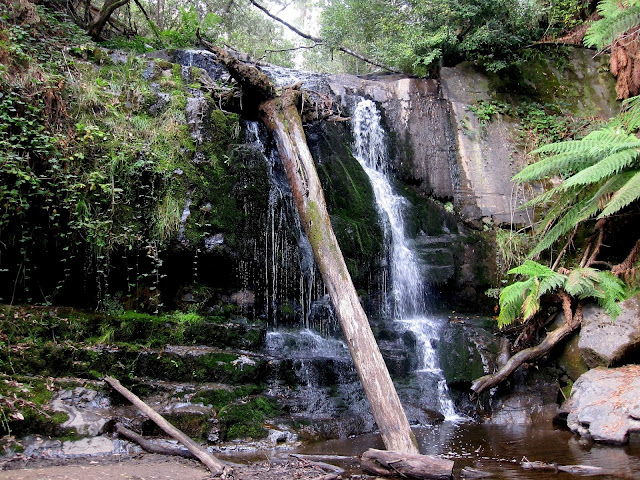 Despite its showers being closed, the picnic ground just outside Lilydale was an excellent overnight stop. Two large oak trees there are said to have been grown from acorns gathered at Windsor Castle in 1937 during the Coronation of George the IV.  The falls, a higher and a lower one, are on a par with those at Evercreech -minus the terrible roads, and would have been lovely too, but for the fact that an enormous fallen tree limb blocked the track and large tree trunks had been swept into both levels by the recent floods.

Lilydale intrigued me because it had originally had a large population of Germans. Indeed, rumour had it that it used to be called German Town until the First World War, when anti -German sentiment led to a change of name, as with Collinsvale (formerly Bismarck), near Hobart, and many other places around Australia.  Wiki has a much longer list of these.
As with other dark chapters in Australian history, this one has been somewhat glossed over in our history books and one Lilydale website  more or less denied it, so I will go into it a bit here. I was very surprised on doing a bit of internet searching, at both the extent of German immigration and influences and how harshly Germans and their descendants were treated in consequence of the two World Wars.

According to Dave Nutting’s German- Australia website (which German readers can read in German if they prefer).
“By 1890 German-speakers were the largest non-British minority in Australia.” Until World War 1, they were also well respected, both for their work ethic and the skills they brought with them. Some of the more famous Germans of that era included explorer and naturalist, Ludwig Leichhardt,  explorer, botanist and director of Victoria’s Royal Botanic Gardens, Baron Sir Ferdinand von Mueller, Georg von Neumayer, scientist, magnetician, hydrographer, oceanographer and meteorologist, who established Victoria’s first observatory and  helped to organise the ill – fated Burke and Wills expedition and no, it wasn't his fault, or that of the other Germans on it Hermann Beckler and Ludwig Becker,  that it all went pear shaped.
Others made their mark in agriculture, mining,and the arts.  They had also made notable contributions to beer making  (Resch’s beer), viticulture and wool growing,  though with the exception of wine growing in the Barossa Valley, these are rarely attributed.

Although there had been a small trickle of Germans earlier, large numbers began to arrive after 1855 when transportation of convicts ceased. Needing labour and skilled workers, the Tasmanian Government had set up an assisted passage scheme which required migrants to work for a set length of time for the landowner who had sponsored them.
Many of  the of 134 Germans who had met on the ship “Montmorency” settled at Upper Piper in the north, which became known as German Town, only to be changed to Lilydale when anti - German sentiment ran high in consequence of World War 1. The settlers “… ran small farms and sold their produce at Launceston, or took it to sell to the gold miners at Lisle, near Mt Arthur" where some 2,500 miners were working.The name change could well have been voluntary, as with Bismarck (later Collinsvale) where Germans feared that their produce sales would be prejudiced at a time when import bans were already in place on German goods.  German sausage became known as Belgian  at around the same time.

When World War 1 broke out, Germans were dismissed from public office or refused employment, particularly in the mines. In South Australia where 10% of the population was German, Lutheran schools and German clubs were closed and in some cases their properties, businesses and clubs were looted and or burnt down.  Despite a number of Germans going to fight alongside Australians, over 6,000, even third generation Germans, were interned.

As Nutting recounts, "An amendment to the "Aliens Restriction Order" on 28th July 1915 prohibited enemy aliens and naturalised subjects from changing their name or their business name."  In 1917 German Australians lost the right to vote.

That such attitudes were also prevalent in Tasmania, is borne out by the treatment of Gustav Weindorfer, founder of Cradle Mountain National Park. According to one respondent to a comment on a book review in the Tasmanian Times, Weindorfer was villified as a spy “… (Local citizens) complained to the Police that he was using his newly-built chalet called Waldheim in Cradle Valley to “erect a wireless station to relay Morse code messages to enemy ships.” One irrational patriot reported him for “taking observations of his surroundings”, and another for “transporting heavy machinery” (it was a cast iron stove). His dog was poisoned with strychnine. He was forced to relinquish his shares in the North-West Co-operative Freezing and Canning Company, and he was no longer welcome at the Ulverstone Club.”


As Nutting points out, it is somewhat ironic that General Sir John Monash, civil engineer and arguably Australia’s most celebrated wartime commander, was also of German -Jewish origin, though his parents had had the foresight to change their name from Monasch.

The Second World War provoked similar responses, with around 7,000 residents being detained -around 4000 Germans as well as those of Italian and  Japanese descent. Almost ten thousand German and Austrian refugees had arrived in Australia between 1933 and 1939. In 1940 another 2,000 refugees fleeing Nazi Germany who had arrived on the Dunera were also interned,  together with 1600 Prisoners of War, making a total of 12,000 in all. Initially, both refugees and their perceived oppressors were confined to the same camps simply because both had Germanic names. This part of our history has only recently been acknowledged with the opening up of Cowra in NSW, which is now visited by thousands of tourists each year. Certainly by the time we arrived in the 1950's, we were strongly encouraged to deny our German heritage and blend in as quickly as possible. In those first waves of post war immigration most newcomers kept a low profile and worked hard in menial jobs because  overseas qualifications were not recognised in Australia, though their children often went on to do  very well.


War is war you will say. Terrible things happen to innocent people. Why should we bother about events which happened 70 years ago and long before most of us were born? Just as we deplore the omission of the war from Japanese schoolbooks, we too should not whitewash our history lest it should repeat itself. As Mia Spizzica wrote in her moving account of what happened to Italian families who were interned "When ethnicity counts: Civilian internment in Australia during WW2",


“.... could it happen again? Italian families suffered because of their origins. But this has never been acknowledged by successive Australian governments as unjust. Australians have a right to know the truth about what Italian migrants endured as part of this nation’s migrant history. After 70 years of silence, is it time to raise awareness of wartime injustices to Italian migrants?”


Past injustices notwithstanding, people of Germanic ancestry are still one of the largest ethnic groups in Australia, ranked only behind Australians, those from the British Isles and Italians. They accounted for  4.5%  of the population at the 2011 Census, though many, especially third generation Germans, did not respond to the question on ancestry.

Things did apparently proceed relatively peacefully in Lilydale, according one Catherine Hamilton, commenting on a book on this subject. Indeed, the official record shows that only 19 foreign nationals from Tasmania were sent to internment camps, though many were assigned to farms and all had to report to police. One story as yet unconfirmed, has it that internees were also used to clear the bush in preparation for the building of Butler's Gorge dam in the southern highlands. The only trace of its Germanic roots which I could see in Lilydale was perhaps the name Bardenhagen on the local hardware and rural supplies store, owned by third generation Germans. It would seem that their main legacy is the patchwork of small farms and orchards which continue to occupy the undulating countryside.

From there, I meandered over a maze of country lanes (all sealed) to Hillwood on the Tamar, which to my delight, still had a pick - your-own strawberry farm. Then, after posting my Easter eggs at Exeter and taking a peek at Notley Gorge, hideout of yet another famous bushranger, Matthew Brady, I continued on through backroads to Sheffield.  How odd, I thought as I was driving through this picturesque countryside, that we know so much more about bushrangers in Australia, than say, about people who made important contributions to medical reseach,  architecture  and industry, unless they should happen to be sportspersons such as the football heroes the Riewoldt brothers, or international cricketer,ShaneWarne, (though you won't find any reference to their ancestry on their Wiki pages).