Autumn’s Last Hurrah and Anyone for Real Tennis?

It’s late in the season but Hobart is finally getting its Autumn act together. There is now a glorious show of colour in its parks and gardens and the weather bureau has promised us at least one nice day, the first one in ages, where it isn’t showing the sun as a fried egg sitting on a cloud with rain drops under it.

Meanwhile, I have discovered Hobart’s Real Tennis Court and finally worked up the courage to peek behind its sandstone walls. This was the original form of tennis which is believed to have evolved around 600 years ago, possibly in Basque country in the south of France or even in England. Either way, Henry VIII brought it over from France again in 1529 and established a real tennis court at Hampton Court.  Though its rules – more complex than those of lawn tennis, its strangely bent rackets not racquets, and even its balls -handmade and more like a baseball, differ from conventional tennis, all other forms of the game evolved from this in around 1870. Read its history here. Nevertheless, there are still 46 courts like this around the world - England has 24, the USA has 9, France has 2 and Australia has 3, though ten of these were only built in last twenty or thirty years (not sure where the others are, though there‘s definitely at least one in the Netherlands). In the USA it is known as Court Tennis. In Australia it was previously known as Royal Tennis, but the name was changed in 2002 to bring it in line with the UK definition. The Hobart court, built in 1875, remains the oldest in Australia. The real question though is how did it come to be in Hobart at all?

English merchant  Samuel Smith Travers, who had been an avid tennis player in England  before coming  to the colony, thought that what  the place needed most to keep him from getting bored was a Real Tennis Court and consequently built it on one of the main  thoroughfares between the Methodist Church  and a government training school for girls. Though the training establishment is no more, the Royal Tennis Court still stands unobtrusively beside the church on one of Hobart‘s main arteries behind a somewhat forbidding stone wall.

Beyond lies a modern reception area which has its own ‘professional,’ clubrooms and a view of the court. The professional is busy on the phone and doesn't seem too excited to see me, so I just have a little poke around. I learn that the club currently has about two hundred members. A thick vine growing over  the  entrance  was  planted during the club’s centenary by Pierre Etchebaster, a Basque, who was world champion  for 26 years, from 1928 – 1954.  Alas, the two players on the court are just leaving as I get out my camera, so I don’t get to see them in action, but it’s a fascinating glimpse into an arcane world hiding among the office towers. To see what the game actually looks like click here, but to find out for example, what a ‘chase’, a ‘poop’ or a ‘bobble’ is, or what the dedans and tambour are all about, click here.

Looking around, I get the distinct feeling that this club would not necessarily want me as a member - there are strict rules about behaviour, but then would I want to be a member of a club that actually wanted me as a member? (As Groucho MarX said first).
The park is probably more my style, but at least it's another mystery solved. 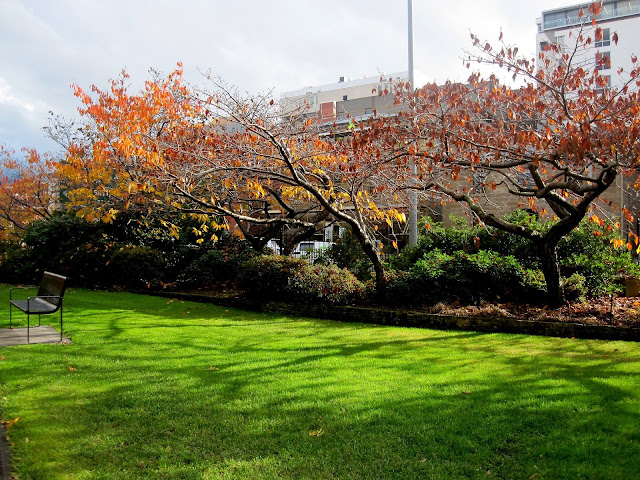