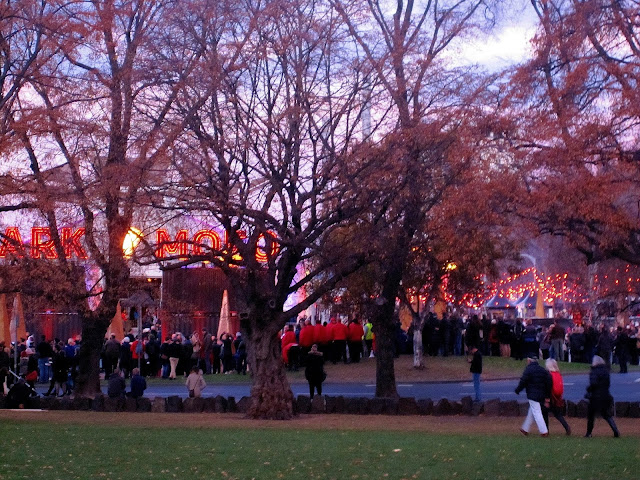 It’s Sunday night on the waterfront. At dusk the haunting Siren’s Call brings us together. Tonight is the last official night of Dark Mofo, though there’s still the nude swim at dawn on the Solstice.  The excitement builds as the sky darkens. Children wave lanterns decorated with cyclopean eyes.  Then to throbbing drums, grotesque figures begin to bob above the gathering crowd – evil spirits we are told – a hobgoblin, a black razorback pig, a loathsome dreadlocked red female. Some distance behind her is the Ogah Ogah, the giant papier maché Tasmanian Tiger in which we placed our slips of paper with our regrets and fears the previous Saturday.

More people stream in from the side streets as we swarm, shuffle and trip along the waterfront. As we pass by the blood red Museum, Ogah Ogah obliges by stopping in the middle of the street and putting on a little dance. Both the shaking and the dance are part of the performance in its native Bali where it is part of the New Year tradition.

As we enter Dark Park, the drumming becomes more insistent and frenzied. The anticipation reaches fever pitch as we press against wire mesh fences to get a better look. I don’t know how many people there are but it seems like thousands of bodies pressing in on each other. Tall men seem to have bullied their way to the front, but I can see a glimpse of the action on the iPhone of the man in front. The other figures – the demons, now continue on into the darkness but the Ogah Ogah remains alone on a huge circular dais. The drums beat on. For a moment part of me thinks, “What a shame to burn this wonderful creature. This should go to a museum or a school.” Then the older darker reptilian brain chimes in and says, “Go on, let it burn. Hurry up and light it.” At least we aren’t sacrificing a real animal in the name of art, unlike the performance by Austrian Hermann Nitsch in another part of the docks. Patrons of this event needed police protection from animal rights protesters. Its probably no worse than what happens daily in our slaughterhouses, though we keep that knowledge hidden from ourselves. Presented as Art it seems frivolous and unnecessary.One hopes that the bull was humanely killed.

Throbbing drums accompany the procession, I had a much better clip of this, but it exceeded the file size

Still, even here there is a sense of doing something illicit and forbidden. A quick look behind me makes me think I see something of the repressed excitement that probably accompanied public hangings and witch burnings.

The crowd falls silent as first smoke, then flames and sparks rise heavenwards into the night sky. After the build- up, it is almost an anticlimax. Soon, burning pieces start to fall off.  People start to wander off in little clumps. I don’t know how many people participated this year, but last year 10,000 people had filled the Ogah Ogah with their negative thoughts. Let’s hope the magic works.


My walking buddy remarks how the shared spectacle reminds him of the community bonfires we used to enjoy as children. I am not sure when they became illegal, but you don’t see them anymore. In that sense Ogah Ogah has been cathartic. We enjoy a hot cider and some bad music. My companion is a musician, so it’s torture to his ears and we don’t stay long. Then it’s Good Night and Goodbye Dark Mofo for another year as we part company and go our separate ways into the night.