The unexpected feast was not the only surprise in Geeveston. My friend went home the night before but I still wanted to do the Duck Hole Lake walk and possibly Adamson's Falls, which I had previously encountered but not conquered. Alas, this time I couldn't find the start of the track so I was heading into Geeveston to ask Forestry when I noticed the sign “Platypus Walk.” Nice, I thought, not for a moment expecting to see one.

The platypus Ornithorhynchus anatinus, is a most unusual creature. It belongs to an early branch of the mammalian family and its only near relative is the echidna. Not only do platypuses have fur and suckle their young like other mammals, but like other marsupials such as kangaroos they have a pouch, but unlike them, they also lay eggs. They are excellent swimmers and have webbed feet and a bill like a duck.  When naturalists sent the first specimens to the British Natural History Museum in 1799 the curators thought the collectors were playing a trick on them and looked for the stitching which held the bill. Among many other curious features the male platypus also has a poisonous spur to protect it against enemies and to fight off other males, so don’t ever try to catch one. 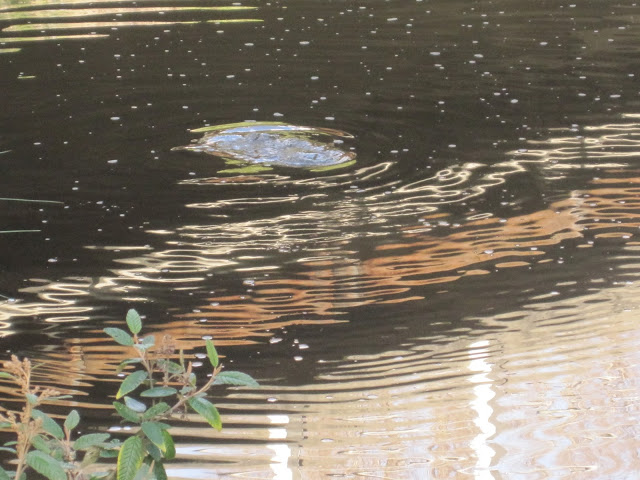 At first I saw only the telltale bubbles and rings, but one by one, platypuses popped up to the surface grabbed a few mouthfuls of air and returned to the business of scouring the bottom for food. It took me a long time to recognise a platypus. I blame little Golden Books and Warner Brothers for this. In my childhood copy of “Animals of the World” the platypus was shown as a large brown thing rather like a fox with a beaver tail (as Warner Bros. did later too) and I looked for this creature in vain for many years. It wasn’t until I was in my twenties that someone finally pointed one out and they turned out to be small black shiny rat-like creatures swimming in dark water. Those at Geeveston were a bit bigger and blue grey in colour and much more easily recognisable, although a local man who took up a position beside me, said that these were only juveniles and there were bigger ones in the Kermandie River.

Alas, my platypus shots are a lot like my bird and seal photographs – I usually catch them just as they are leaving or diving. For a really good look at what they look like in action, you should see this National Geographic clip. For more amazing platypus facts such as their feeding and breeding habits, try livescience  though be warned, this site is riddled with ads. Nor does it mention that platypuses are in fact threatened and declining.


The latest research also shows that they have about two thirds more DNA pairs than humans. Since many of these are for ancient evolutionary traits, many of which have not been carried forward, it not only tells us about the evolution of platypuses, but other species as well, including our own. Curiously, I learned more about this from the Seattle Times, than from the Australian papers, but maybe I am reading the wrong ones. It's just another reason why we should take better care of them.  Who knows where this research will take us in future.

Obviously these platypuses (yes, that is the plural, not platypii) have not read the texts that say they are nocturnal and very shy, as they are splashing about and having lunch in the middle of the day. It’s a delight to watch them. You just have to be quiet and a little patient.

Although the sun is shining,  the shadows are getting long and I still can't raise anyone at Forestry. I am also determined not to spend another freezing night in the van - it makes me pity those poor woodcutters in their tents, so I start heading home. However, no visit to this area would be complete without taking home some apples. It produces over half of the apples exported from Tasmania and honesty boxes still abound, though I notice that one bears a sign saying "If you steal my apples, I hope you choke."  I  pay for mine. They are considerably cheaper than in Hobart and usually tastier too.