Apparently that wasn’t the real New Town Rivulet that I followed on the first day, only a tributary. The main branch flows under New Town Road, almost a kilometre north of the Maypole Hotel, though the continuation is difficult to spot from the road. I got there by following it down from the dairy through the John Turnbull Reserve. This Linear Park has fitness equipment near the top, ball practice areas and a very well patronised dog exercise yard. After a bit of no -man’s -land with high voltage power lines, a few dwellings and a community garden, I found myself on Creek Road.

There are some interesting buildings in this area. Beyond some Aged Care and Community Care facilities stood the magnificent Tower of St. John’s Church.  This church, which has operated continuously since the 1830's, was designed by John Lee Archer, civil engineer and colonial architect from 1827 –to 1838. (Archer also designed a number of public buildings including Parliament House and The Theatre Royal, as well as the Ross Bridge).  Geoff Ritchie’s detailed post about seating arrangements within the church, tells us a lot about the social order in colonial times. On either side of the Church are the Orphan School buildings, girls on one side, boys on the other, which predated the church by two years. After the Orphan School closed in 1879, it became an infirmary for the aged and poor. In 1939 new buildings were added, such as Gellibrand House for war veterans and Wingfield House for children affected by the polio epidemic of  1937 -38.

In the valley to my left there was …a Castle!?  It took quite a while to find out what that was about, but, Zayee Castle as it was called appears to have only been built in 1964. Since then, it had had various incarnations -as a Doll Museum, as a pub, and as a Yum Cha establishment, but will shortly return to its roots and re -open as a pub.  However, the real interest here lies in the colonial building behind it, which is much older. According to Heritage Officer at the Glenorchy City Council, David Parham, the property it's on was part of a 300 acre grant to one John Blackwell who came to the colony in 1819. The house may have been one of two mill houses on the site. Blackwell operated a tannery here which he gave up in 1832 and subsequently sold some of the land.

This area really was the beating heart of New Town as the Rivulet also served a number of other enterprises including Calder's flour mill (1841 though not entirely legal until1843), a brickworks, George Gatehouse’s brewery (1821) and the Constantia Distillery (1824), though there is no sign of these today.  The track soon deviates from the road and follows the Rivulet all the way to New Town Road.


As I was crossing the road, I could see a really odd building – tall and turreted, just a little further down.  I asked several school students who were at the crossing with me, but no one could tell me anything about it. On closer inspection its gate was locked and barred and there was no signage except for "Keep Out" signs. Since it was on the corner of Tower Road, I asked passers -by in that street, but none of them had any idea either.  Eventually, a lady in her front yard (Thank you, Winifred) who had lived in the area for fifty years, was able to help me out. She also introduced me to the work of Donald Howatson who has compiled "The Story of New Town - Street by Street" (2011).

“The Towers” as it was called, was built by one William John Rout (1790- 1868) an ironmonger in Hobart, who had bought land from John Blackwell. Understanding the connection between poverty and crime, he was instrumental in establishing the Ragged Schools for poor children in the 1850s, to enable them to earn an honest living. These had already existed in Britain as the middle classes became alarmed at the growing poverty and squalor in their cities, fearing it would lead not only to crime but also to disease and depravity.  Strongly evangelical and moralistic, their guiding principle was “from squalor and vice to virtue and knowledge.” Although both Melbourne (1859) and Sydney 1864) took up the idea, Hobart had the first such schools in Australia.
Rout also agitated for an end to transportation of convicts to Van Diemen’s Land. This finally came to pass in 1853 and to formally close this dark chapter in the colony’s history, its name was changed to Tasmania in 1855 -1856.

Back on New Town Road, I find a stairway leading to an elevated walkway beside the Rivulet. From here you can see an elegant 1840s convict -built bridge hidden beneath the road.  Alas, on the opposite side, some of  New Town’s more recent industrial history intrudes on my field of vision as if to remind me that this is in fact a working suburb. While it doesn’t look as romantic as the picture above, I’m sure that the reality of actually working in an old time foundry or factory was anything but. The Rivulet then meanders around the playing fields of New Town High School which was built on a former racetrack. New Town High School which began as Trades School in Bathurst Street, celebrates its centenary this year, though it has only been at the present location since 1952. 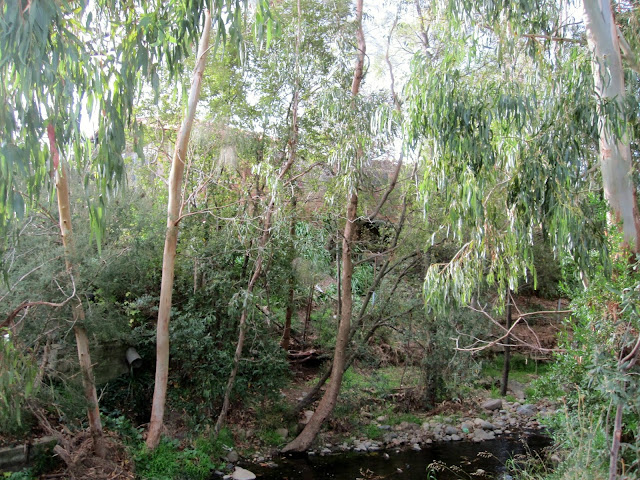 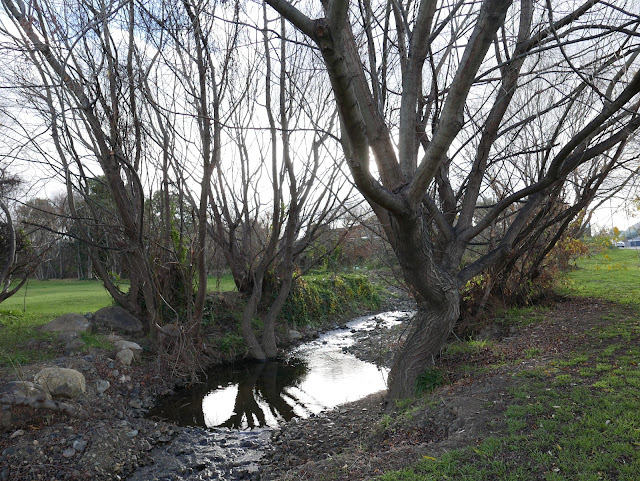 After crossing another road, the path suddenly stops at a residential area and I am obliged to walk along a road again. Towards the end  there is a small walkway, again unsigned, that brings me back to Risdon Road, almost at the intersection where the Rivulet had gone beneath the road on my first visit.

I notice now that the main arm of the creek runs north along the edge of a verge on Albert Road.  This was where market gardens used to be and there's still an orchard on its far side. Next to the Rivulet where it starts to turn westwards, there are the beginnings of a track which lead to what seems to be an old farm house. This turned out to be Pitt Farm, presumably from  around 1810 and one of the oldest in Australia. I only found this out on seeing a painted signal box on my way back to New Town Road.  It is private property however, so I had to walk the long way around via Albert Road and Bowen Road to get back to to my car.

There was however, one more surprise. Just as I neared Zayee Castle again, I could hear birds squawking in the trees. That racket was being made by what looked like young yellow -tailed black cockatoos.  I don’t know if they always live here, but on the West Coast you only see these when they anticipate very bad weather in the mountains. Given that most of New Town and neighbouring suburbs are now densely settled, this was an unexpected bit of nature in the city.

I realise that local/Tasmanian history may not be of great interest to those of you reading this in say, Siberia or the Philippines, but I hope it inspires you to look at your own. Who are your streets named after and why?  I promise that that question alone will lead you down some interesting rabbit holes. Perhaps you will even find some common threads, such as the ideas behind certain developments and institutions, e.g. universal free education - myth that it is. I do like getting my history in small doses like this. Maybe it's the thrill of the chase?  Otherwise it's a bit like going to an Art Gallery where I tend to be a bit overwhelmed by seeing so many paintings all at once. The excitement for me is in finding that odd unexpected piece in an unlikely place where you can really focus on it.
at August 05, 2019